Reuters analysis of Obama failures abroad pretty much as expected

Reuters analysis of Obama failures abroad pretty much as expected

It was those damn meteoric expectations, and the failure of those around him, such as the Secret Service agents who visited prostitutes in Colombia, and soldiers in Afghanistan who killed civilians and burned Korans.

And that damn Congress:

Karl Lemberg, one of thousands who thronged a Berlin park in July 2008 for a pre-election address by Obama, says he believed at the time he was seeing a seismic shift in relations between the United States and the rest of the world.

Four years later, now married to an American woman and studying in Washington, he says he has trimmed his expectations, particularly after learning how Congress limits the freedom of any president. “I have a much more realistic view of the U.S. now,” he said. 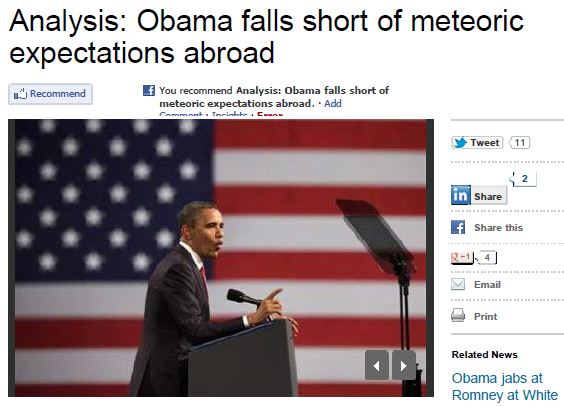 All along, I thought that it was George W. Bush, all the while it was the Secret Service, our Military and the Congress, even though it was controlled by the democrats for 2 of his 3 1/2 years in office. Thank you, Herr Lemberg. Your education has served you well.

They sure don’t make Democrats like they used to. In the ancient history of the Democratic Party, sometime between the period when Southern Democrats (yes, Democrats) ushered in their post-Civil War Jim Crow laws but prior to Democrats’ dogged resistance to the 1950-1960 civil rights era (that was your Democratic father, Democrat Al Gore, former Democrat senator & Democrat representative, Democrat VP, Democrat nominee for president), and prior to their turn to Marxism, there was one Democrat who really, truly was willing to take the heat of the kitchen known as the presidency.

When Obama sent back to London the bust of Churchill, HST’s sign probably went with it,

Just like John Belushi cowering in the mud…”It wasn’t my fault!!!”

well, New York would be under 20 feet of water now, if Obama hadn’t made the rise of the oceans slow … so he’s got THAT going for him.

And there was never care for the sick till Obama was nominated.

And there are now jobs, for the jobless, as promised … oh, wait … real unemployment is more than double … must be that super majority of Democrats that held him back.

http://www.youtube.com/watch?v=u2pZSvq9bto
That’s Obama’s “generations from now we’ll be able to look back and say, this was the moment …”

Let’s face it, we’re not good enough for him. Never were. Here he thought he’d be able to lift us up, make us better than we are, but we’ve steadfastly refused to step out of the muck. He deserves better.

Maybe Karl Lemberg has an idea of where that might be. After all, Germany showed the world just how much can be accomplished when a legislature and a judiciary aren’t impediments to one man’s dreams.

There REALLY are some people here who need a “sarc” tag, Cassie. You have to be careful…

Apparently. I figured anyone smart enough to keep up with the wise professor has a built-in s–t detector.

As i see it the comment fits history perfectly.

Germany does not only have Nazism but a very recent deep experience of communism.

From both angles they should have seen the dynamics at play -even if they id not know the limits of the presidency.

The left is a cancerous toxic ideology, and can and will completely destroy a civilized society of Freedom, Liberty, Democracy, and the Truth, in a blink of an eye.

So as Obama and the hard left wage their continued war assault on America, Individual Freedom and Liberty, the US Constitution, Religion, and so on, they do so intentional with the intention to destroy the US Economy by any and every means necessary.. to stifle, obstruct, and restrict America’s Energy supply by any means necessary, thus destroying America’s Independence and ability to operate and sustain it’s own self Domestically and Internationally, and with it the system and infrastructure of Capitalism itself, thereby shrinking the private sector, at the same time build up the Govt and it’s massive bureaucracies and self-imposed authority and will over the private sector, including and part of the equation- the burdening of America and the American People with unsustainable National debt so massive, that it eventually collapses the whole system of the American Republic, thus the country.. So when people accuse Obama and the hard left cronies in his administration of incompetence and failure, it doesn’t do anything to them because they could care less about being, let alone perceived as incompetent failures, as it is not their intention to be responsible and competent Stewarts of the Nation’s govt.. it is their intention to destroy it. That is their Socialist-Marxist agenda, thus whatever means accomplishes their goal, is the means to their ends, ie; our end.

Why is that people refuse to accept this as fact when all the evidence is in their faces.. Because delusional denial of- “This can never really happen in and to America” syndrome, is an all to typical reaction and response of the general public, besides those who have indoctrinated tom believe that this is a good thing.

“particularly after learning how Congress limits the freedom of any president”

The Euros really are used to living under kings, aren’t they? (Except now the kings are the unelected EU bureaucrats in Brussels.) Democracy is just a word that sounds good but has no meaning to them.

(Yes, yes – I know we’re a republic, which they really don’t understand.)

Well it really is just Karl . Lemburgen not Karl Marx.

No need to drag all of Europe into it.

Lemberg had no idea how the machine works, yet he was certain what change would fix it.

And Europeans think we’re the arrogant ones.