Michael Miller, The Miami New Times reporter who kicked off an internet firestorm a few days ago with a report of armed groups of neo-Nazis patrolling Sanford, Florida, is at it again,  After Trayvon Martin, Neo-Nazis Say They’re Armed and Patrolling Sanford. 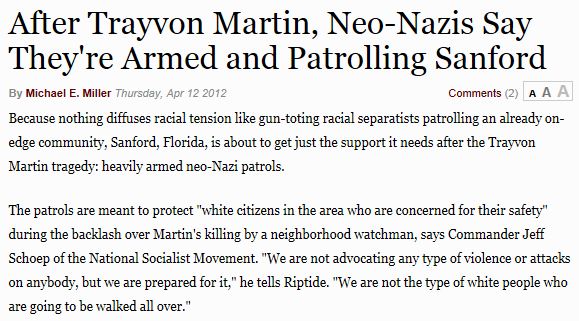 Because nothing diffuses racial tension like gun-toting racial separatists patrolling an already on-edge community, Sanford, Florida, is about to get just the support it needs after the Trayvon Martin tragedy: heavily armed neo-Nazi patrols.

The patrols are meant to protect “white citizens in the area who are concerned for their safety” during the backlash over Martin’s killing by a neighborhood watchman, says Commander Jeff Schoep of the National Socialist Movement. “We are not advocating any type of violence or attacks on anybody, but we are prepared for it,” he tells Riptide. “We are not the type of white people who are going to be walked all over.”

The Sanford Police Department “has not seen any neo-Nazis on patrol,” says Sgt. David Morgenstern, a department spokesman. But Schoep, whose neo-Nazi group is based in Detroit, tells Riptide that ten to 20 locals and “volunteers” from across the state — including some from Miami — are actively cruising the Central Florida town. He declined to specify what kind of firepower they have or where they are driving.

After all the embarrassment the Miami New Times caused itself, the blogosphere and the mainstream media with the first story, doubling down without any new information simply appears to be traffic baiting (hey, it worked by getting me to link).

Elsewhere, as everyone is waiting for the prosecutor to make a decision on whether to charge Zimmerman, tensions are rising, stoked in part by internet frenzies kicked off by stories about neo-Nazis patrolling Sanford:

Dunno enough about the specifics of who, where, what…that kinda thang…to answer you question.

I’ve been saying that the OWS fools will inject a “law and order” demand in this coming election, and stories like the one at that link will help, too.

I assume you mean this article, but my question is not about DOJ, it’s about the local police; why have these people not been arrested in Florida or wherever they are, by the local police on state charges? No DOJ action is necessary for that, and there’s nothing Eric Holder can do to stop it. So why hasn’t it happened?

Nope. THAT story. Again, I don’t have information sufficient to permit an intelligent answer on your base question.

This seals it. I’m cancelling my subscription to Miami New Times. Oh wait…I’d never heard of them till this story. Hopefully, we’ll never hear of them again after this plays out.

The first article was a “blog” entry categorized as WTF Florida? I’m supposed to be moved to credulity with that?

In the new article, they say that the NBP is “calling for a citizen’s arrest. ”

It’s almost like they want problems. Keep reporting it and it’ll come true then they can point fingers at this set of creeps and the growing backlash over the NBPP goes away….not.gonna.happen.

Huh. It’s a-l-m-o-s-t like some in the press have this racial meme they feel impelled to push, even in the face of publishing stuff they KNOW is false…

Odd. They also seem to have mastered time travel as this article was apparently written on “Thursday, Apr 12 2012.”

ABC is reporting the Nazi myth, too…

yea-etch it in stone. Only under the stone, in worn, teeny tiny letters will you find the word “supposedly”.

Even our own conservative talk radio host (WJR Detroit) Frank Beckman reported it as a fact yesterday.

Once it’s out there, the “news” media cite each other as sources. Luckily the Professor pinned down the genesis of it.

Doesn’t do a lot of good if only “we” know the truth.

“Neo-nazi’s are patrolling in Florida…..everyone knows it–it’s all over the news”.

Maybe some Breitbart-ish person needs to start a “Not News” site for the express purpose of knocking down the BS.

McQ over at Questions and Observations has a post up about the Nikki Haley NOT indictment NOT story.

Nothing converts a liberal to a conservative faster than media disinformation/media bias.

Maybe call the site “Hopes” (rhymes with Snopes and mocks Obama’s “Hope” activities devised to ruin this country and deconstructs stories the media “hope” are true, such as this story). 🙂

There are over 300 million of us, and in this country, you can find somebody who will say any ol’ damn thing you choose. So, a reporter needs a neo-nazi, and voila! one appears, at least by phone. This raises the question of whether the original call was a prank, or if the reporter placed the call and got a real, umm, story.

Nazis in FL are like the Loch Ness Monster or UFOs. No sightings or even fuzzy photos so far.

Does that mean they’ll have their own show on the Discovery Channel once a week?