It means they want your stuff

It means they want your stuff

Because taking your stuff is a basic human right.  And they know their rights.

Greetings from Wisconsin, land of the permanent election cycle.

Spring is here and I have been seeing more bumper stickers than usual. I append one I had not encountered before.

What does it mean? 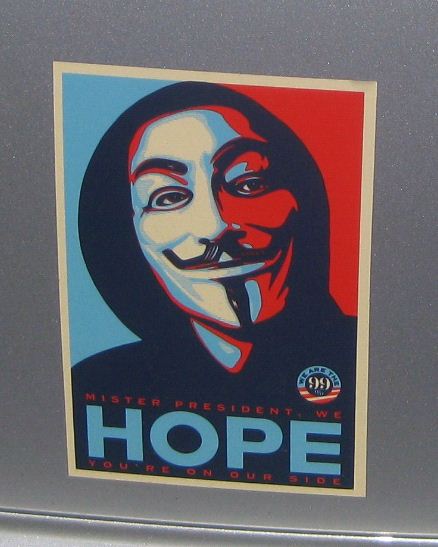 Another thing to note is that it implies some ambiguity about Obama.

Mister President, we hope you’re on our side.

Normally, you would expect a Liberal Democrat president to be on the side of angry leftist wanting money from “rich” people. However, they actually don’t know if he is on their side.

It is obvious to me where Obama stands with OWS. If OWS is useful to Obama the he’ll be on their side. If OWS isn’t useful, they will be ignored and/or thrown under one of the fleet of buses.

*please forgive any spelling mistakes, coffee hasn’t kicked in yet

Secret Service: I demand that you investigate! The creator, the producer and distributor of this bumper sticker, as well as the one(s) who display it!!

Freedom of speech, you say?! Well, if Ted Nugent is to be investigated for making comments about the November election, I say THIS is a worse offense!! You MUST investigate!!

Really? Saying “we hope you’re on our side” is the same as:

“we have to chop their heads off in November” or “if Obama is re-elected I’ll either be dead or in jail this time next year”?

REALLY? You think those are somehow equivalent?

Let’s not forget that Ted Nugent, for all his tough talk and gun waving now, was such a coward about going to Vietnam that he spent days wallowing in his own feces to avoid going. Really, a true-blue craven coward.

That’s who you are wallowing with. Hope it smells nice.

But ha-ha, a sticker saying ‘Hope you are on our side’ is JUST the same as ‘chop their heads off in November’.

That is a lie, and you are a liar.

“I never shit my pants to get out of the draft,” says Nugent, good-naturedly.

“You also told them you took crystal meth [methamphetamine, the highly destabilising drug sometimes described as poor man’s crack] before the medical – as a result of which, and I quote: ‘I got this big juicy 4F.'”

“Unbelievable. Meth,” he replies, in a tone of deep sarcasm. “Yes, that’s my drug of choice. You’ve got to realise that these interviewers would arrive with glazed eyes and I would make stories up. I never did crystal meth. And I never pooped my pants.”

“But you did dodge the draft.” “I had a 1Y [student deferment]. I enrolled at Oakland Community College.”

“You said then that you wanted ‘to teach the stupid bastards in the military a lesson’. I’d have thought you’d have loved the army. Guns. Travel. Danger.” “Back then, I didn’t even understand what World War II was.”

sarc-
“NO WAY, the left is always measured and rational!”
/sarc

See what I did there?

How sad, especially when you consider that New Yorkers are lining up to give their personal information away, just because of a rumor that Obama money is being given away.

And those people are voting?! Frightening.

It’;s a shame they didn’t organize the Obama money giveaway on Nov 2nd… far away from the polls.

The more militant OWS cohort is uncertain about the carefully ambiguous Alinskyite Obama.

Simple as that. Two factions of the Collective.

The OWS contingent do not appreciate their rightful place. They exist to be exploited until their value is consumed. Well, to be fair, their leaders may survive longer as their numbers are smaller and manageable. The rest are disposable. As they have always been, from conception to death. These people do not quite understand what a collective ideology actually represents. They should shift their perspective to that of an ant, rather than an ape.

One thing about evildoers – they turn on each other as readily as they do the righteous. Those who live by hate, lust, conquest, power just can’t change their MO…their loyalties and unions are always tenuous, mysterious, fragile and ephemeral…constantly shifting.

Obama’s kin, an Arab/Muslim in the British House of Lords is rumored to have put a bounty on Obama’s and GW Bush’s heads…just like the New Black Panthers have put a bounty on the head of Democrat, defender of blacks and human rights, George Zimmerman. Muslims slaughter muslims world-wide daily in bombings, assassinations, etc. For some reason, muslims are slaughtering blacks in post-Ghaddafi Libya.

There is no pattern, just predictable behavior – hate, lies, lust, greed, continual conflict…as with muslims, so with leftist radicals…and they are planning a very hot Summer in the USA.

You gotta stop that Islamophobia–it’s the religion of peace; the MSM told us so and they wouldn’t lie!

Among the OWS/Obama cohort, it’s a “dog eat dog” world.

A guy in the British House of Lords is somehow ‘Obama’s kin’?

And Zimmerman is now a ‘defender of human rights’?

You folks certainly live in a strange world!

Pretty good idea of who these people are from here.

This is truly chilling. We are being forced to sit on a powder keg and the Democrats are helping these fanatics light the fuse.

I suppose the secret service is visiting this bumper sticker’s producer….nah.

Not exactly even close to ‘we need to chop their heads off in November’, is it?

You are right Tallon, it isn’t in any way related to the clear vote metaphor of chopping off heads IN NOVEMBER. The Guy Fawkes mask and the “hope you’re on our side” statement is, instead, a clear reference to terrorism.

I guess the Occupying Space Cadets are just a little disappointed that the only thing Ozymandias-on-the-Potomac plopped on the historic Oval Office Presidential desk was his feetsies vs their preferred “plopping” objects of choice?

Must piss ’em off!

Plopping? Are you talking about Ted Nugent getting out of Vietnam by plopping in his pants again?

It means to me numerous things; first of all a lack of creativity combined with poor math skills leading to false advertising. It says to me that they got cheated from a real education.

The graphics are irritating and tired looking, perhaps visual evidence of a cheating culture as legitimate discernment.

It means to me that education as a problem solving tool in a free country are wasted on this group. They are asking for the use of power, which does not require an individual to think or be free, only be on the right side.

Yep, they want stuff and have the illusion of deserving more stuff because, like, they went to school and stuff and learned things like how to make ugly art with illogical statements attached.

Since I outed Riverboater as a paid troll of Legal Insurrection’s bumper sticker feature, he’s left and been replaced by Tallon. Or Tallon is Riverboater under a new e-mail address.

Heh….how exactly did you ‘out’ anybody as a ‘paid’ anything?

Is this part of your ‘if I say it, it must be true’ mentality?

So you lie and smear poo on threads for free…???

Talk about your “whore with a heart of gold”…!!!

Is it just me, or does this have that same creepy vibe as the “No Pressure” adds a few years back?

So, Mr. President, if you aren’t for us, you are against us. Got that?

Talk about a thinly veiled threat!

How tiresome this has become–nothing escapes being made into the “hope” poster these days–Trayvon’s visage was used for it.

Anybody hear how the Romney’s dressage (dancing horses) are going to do this year?

The contest is in the Netherland’s this year, isn’t it?

Of course, the Romney’s don’t ride the horses….they just OWN the horse-and-rider team.

They are far beyond actually riding the beasts they own.

Gosh, why aren’t the Romney’s attending the gala ball and dancing horse competition in Europe this year?

Gawd, you Collectivist pukes are idiots!

Dressage is not “dancing horses”.

If Mr. Romney and his family were to go to Europe to attend an international dressage competition…

they would be going on THEIR money.

Compare and contrast with Shellie Obama and her couple dozen BFF vacay in Spain on the tax-payer dime.

And, dumb-phuc, Ann Romney has ridden dressage for years as part of her equine therapy for the MS from which she suffers.

She is considered a very expert rider, btw.

Who gives a rat’s ass what Romney does with money he alone earned? His Dad became very successful having NOT GONE TO COLLEGE. Romney donated all the money he inherited to a foundation in his father’s name. He understands striving and achieving.

He’s been very successful at pretty much everything he’s done, which has involved a lot of turning bad situations into good or at least better ones. I think that’s a track record we should value, as opposed to………the Agitator-in-Chief.

At least the Romney’s actually do something for whatever awards their team wins…unlike recent Nobel Peace Prize award winners who get it just for the heck of it.

“What does it mean?”

It means that even the kids that follow “Anonymous” are disgusted with the results this President’s policies have obtained.

If Obama ate dog to gain its attributes…

Anybody hear how the Romney’s dressage (dancing horses) are going to do this year?

As a matter of fact, I’ve been SO busy following Obama’s golf tour – er, swing state community college tour – that I have failed to notice how the Romney’s are faring with their hobbies.

Please whisper your juicy gossip to me, Tallon: Are the Romney’s shoveling horse s**t off the roof of their car? Or are they feasting on horse-burgers with horse-radish?

Well, Tallon confirms it: the left consider Legal Insurrection and the Professor EFFECTIVE, thus they pollute his blog.

We, of course, knew it all the time, and that the lefties were monitoring……but confirmation is now official.

(OT, but related: Rep. West said it well here: Allen West Tax Day Speech. It’s long, but well worth the 20 min. He exposes the left, and is EFFECTIVE, and thus is a target. Just like Prof. Jacobson!)

Seems to me it refers directly to President Zero taking sides in the Trayvon Martin thing. It can also be spun to all kinds of other things like theft of property etc, but the hoody and ‘taking sides’ all seem pretty specific to the Martin case.

It looks like Che Guevara in a hoodie instead of a beret. Or maybe Don Quixote tilting at the windmills of the Solyndra-ites.

Does it mean that the OWS loons want to blow up the Senate? Install a religious fanatic as dictator?

No one knows what it means, least of all the mental defectives known as OWS.