I wonder if he followed the Supreme Court oral arguments

I wonder if he followed the Supreme Court oral arguments

From reader Benny who took these photos of stickers in the rear window of a van in Columbia, SC.

Took these pics in a K-Mart parking lot a few hours ago…..apparently some people don’t like our prez. lol 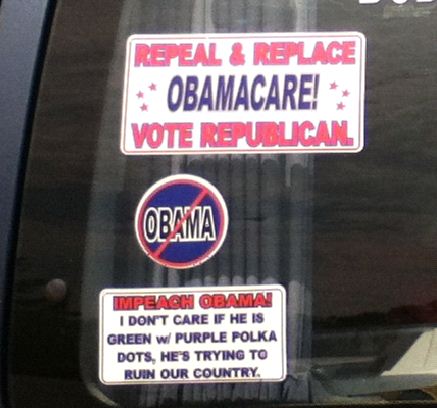 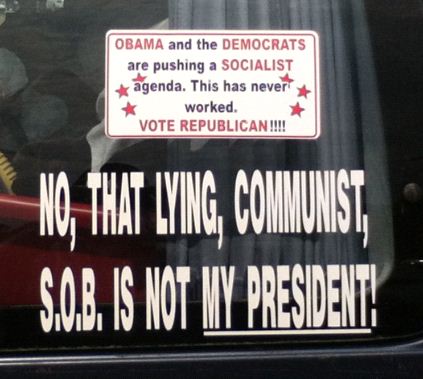 I wonder if anybody’s ever going to bother to teach wingnuts what ‘socialism’ actually means.

Of course, what would happen to the wingnut bumpersticker industry then?

It’d have to go back to selling stickers that just say ‘WAHHHHH!!!!’ over and over again.

More important question: Is anyone going to teach moonbats and socialists what socialism actually means?

Certainly not you wingnuts. Nobody is advocating socialism in this country (except actual socialists, who meet in a phone booth somewhere…all three of them), but you folks are simply too stupid to understand that.

Just how did you get so stupid?

Wow,
You sure do prefer to stick to the gutter, don’t ya.

Resorting to ad hominem attacks is an indication that your argument lacks substance.

Yep.
For example, here is a way to do that whole ad-hominen and why the L/L/P goes that way:

Sample ad-hom.” The first thing that comes up when I google holgarm is “Fatal error” (well, for Hologarma, but close enough.)

—
Discussions is about ideas. And can be very intense. But the issues are attacked, not individuals.

However, Libbies/Lefties/Proggies don’t have anything to do but say “Your momma wears army boots!”, “You stink!”, etc.

Right away you know you have to pity them…they haven’t grown up yet. Poor babies.

They can’t argue from any basis of fact. They niggle over minor details, such as Socialism vs Fascism, without regards to how both are in opposition to Capitalism and typical American values. Without providing examples of how socialism or fascism has worked better.

They fail to point out the continuum of socialism, as Europeans might claim it. How even communism has made life better anywhere.

They are stuck in the idea of a country that is Utopian. Without regard to how the citizenry behaves in a utopia, since they think of “eutopia” instead of “utopia” because, well, they heard about it, but never really investigated it.

They want a dystopia,(ex ‘1984’ by Orwell) in which they would be Big Brother. However, they wouldn’t even have the stones to be Winston Smith and would more likely be an O’Brien, if anything at all.

—
Lefties would not be good citizens for any utopia, since they are grasshoppers, not ants. And probably would be first “against the wall” as examples to the other grasshoppers of what happens when you don’t pull your “Fair” share.

The left uses a rather expansive definition of “racist” to cover just about anything it disagrees with. Now take some of your own medicine with “socialist.” (And why should you care whether the term is used narrowly and precisely, anyway? You have anything at stake in the use of that term?)

As with so many other subjects, Conservatives understand VASTLY more than do Collectivists.

“Socialism”, most broadly, is a system by which the immediate impact of life’s vicissitudes can be spread out, or “socialized”.

We OFTEN use it only as an abbreviation for “state socialism”, which is always coercive. Generally speaking, this is understood to involve state ownership of assets.

But we also practice voluntary socialism in the form of charity, cooperative ventures, and insurance companies, to name a few.

Hence, it is correctly only “state socialism” that is evil, as are all forms of Collectivism.

good points … I often hear this from “liberals”, that say there is no “socialism” without state ownership, because of course they don’t like their socialization of other people’s bad behavior to be identified as such.

But these “liberals” have to keep changing our language to disguise their convictions. “Classical liberalism” is now little understood, because “progressives” stole the term “liberal” for themselves. The brave enforcers of Newspeak are now cruising the blogs apparently. 🙂

Also, Obama did say he liked his Marxist prof’s best, and he was a member of the Socialist New Party in Chicago, despite their attempts to scrub those records.

One of the great demonstrations of the 20th Century comes in the form of the Collective’s MASSIVE ability to lie.

They actually refined it, and applied scientific principles to it, in their effort to make truth and falsehood completely malleable.

This was, of course, one of the several brilliant insights of Orwell.

In the U.S., Collectivists staunchly denied that a Collective existed, much less that they or others accused were members. They still do (see the boob’s comments here respecting a phone booth). Yet they were also and contemporaneously self-identifying…if you just listened to what they were saying. You see this in the OWS “movement”.

The Collective has learned to shape-shift, and smear ideas across older definitional boundaries, as well. They really don’t much care if a take-over of private enterprise is done outright, or merely effectively. They understand it largely results in the same ends they seek, and the precise name applied is essentially irrelevant.

True, Obama is a Fascist. Central planner. You own but don’t control. Socialists are similar, but you don’t own.

However, it doesn’t help when whiny idiots comment and just complain and mock rather than educate.

The fraud of the Left is that they feel that when they go all Alinsky #5 that somehow their opponents don’t see through it. And that’s because the Left fails even at following 13 simple tactics.
We see failure after failure, especially in tactics 2,3,7 and especially 12.

As a result, tactic #1 fails, because the non-Left no longer views the Left as anything but a bunch of dangerous clowns.

Actually, to be more correct…

This is MUCH more dangerous and seductive than outright socialism would be in America.

If you doubt that, look up “fascist economics”. Other proponents have been 1) FDR and members of his cohort, and 2) Nixon.

And yet, our point about your lack of apparent ability to contribute to the discussion continues to be made by you.

Yep, just shorten your response…get right, or is that “Left” to the Ad-hominem..

Hie thee to the moonbattery, and tell them there we need a much better class of troll.

Oh and by the way, you are no longer allowed to use the roads and highways. They were built by socialists and collectivists…you know, cooperating.

Roads and highways are provided for by small government, which all of us support, but you despise.

Small government cannot survive BIG GOVERNMENT, which you LOVE…oddly against all evidence that it is a destructive force.

Hence, we deduce you are of the class of voluntary idiots we call the Collective.

I suppose that’s true. Until socialism came along there were no roads — just trackless wilderness. RME. (Karl Marx would be turning over in his grave if he knew about moonbats.)

Hurry on over to the Daily Kos- that sweetie Markos has a big wet kiss to give you for the job you’ve done to put us in our place!
We bleed from your rapier wit!

As the immortal philosopher Bugs Bunny once said of you: “What a maroon!”

mine was built by private landowners and most of it is maintained by me personally.
next.

hmm, Sloan Construction, Highway Builders, Sumter Utility are all collectives? I would have never known. heck, I even thought they were private businesses, not socialist collective loser groups. try again, punk. we kick your kinds ass in here.

Off to the range. Harder to hit targets there than Holgaram. Even at 3 yards, typical self defense range.

(Ad hom: Holgarry just makes it too easy. I need something of substance, like a sheet of paper, to get a little challenge.)

/OT:
I’ll be shooting at the 100 yard range just for fun today. Gotta dial the scope in for hunting season.

And a little pistol practice too, since I’m one of those people who believe in carrying a firearm. Like the spare tire in my car. There when I need it, though I don’t ever want to need it.

Q: Will HollyGarry (#5) snark in on my carrying a firearm next? Will he resort to calling me “Zimmerman” and a racist? Will he post some lame website link from wikipedia to try to show some creds?

Do I give a rat’s ass about HollyGarry’s opinion? (Naw, I pity Holgaram. Really. I feel sorry for someone who comes to an intellectual gunfight in just his “spank the monkey” footed pajamas.)

Stay tuned!
———
OH, and to the bumper stickers: “Too bad the driver doesn’t want to let us know how he or she really feels!” 🙂

Return soon profshadow….your responses to the troll made my Earth Stand Still for a while as I gloried in admiring them 🙂

I salute a fellow “Bitter Clingerer”!
I think the next snarky ad hominem comment from the Troll will be something to the effect that you need to carry a firearm to compensate for an obvious lack of testosterone. [sarcasm off]

The road and highway argument doesnt compare. See, roads are used by all, available to all and paid by all who use them (vehicle tax, gas tax).

Wealth redistribution… Those are obamas own words. Thats about giving more simply becahse you have more for the government to declare as fair game. In turn, it is what govt does with this money which causes the argument. The programs they fund are not available to everyone like roads are, but only to special interest groups the democrats want to keep happy, and do so using tax dollars.

Its a good thing rkads and highways (your example) are treated the same way the rest of obamas policies are, otherwise your gas tax at the pump would be based on the value of your car and your ability to use the road would also be curtailed because you already have too much, ie, why should you be allowed to drive 500 miles to your vacation, even if it is a public road? Afterall, there are poor out there who dont own a car and with obamas thinking, you should pay for their plane ticket.

You might not see it as ‘socialism’, but wealth redistribution is what it is and no matter what name you use, its not right.

DocWahala, wishes liberals would come up with a better counter than roads and highways. It just goes to show they cant even understand ‘public service’ versus public servitude

Generally, the “robber barons” were neither.

Looks like Holgaram spend his lonely days smashing [probably out of frustration] the red “dislike” button. There is only 1 “dislike” on the comments to his idiotic rants.

You’re right… So obvious he wholly believes that email he received, the one which starts off with “liberals are proud to stand out” and ends with “remember, the more dislikes, the better your chances at winning a free copy of Audacity of Hope”

It must be really hard to smash that ‘dislike’ button when you’re on the floor, holding your breath, stomping your feet and crying “Mommie! They don’t like me!”