I believe, I believe

I believe, I believe

From a reader in Massachusetts:

I saw this at a handicapped spot at the Target Store here in Taunton today. I mused to myself that I wished I had a camera, then I remembered that my newish cell phone takes pictures. So here it is, in Massachusetts no less. Please do what you have to do to block the license plate number.

By the way, here in SE MA, as you no doubt know, it is not exactly a liberal bastion. As I mentioned before, I really enjoy your blog, and have steered some “company” your way. 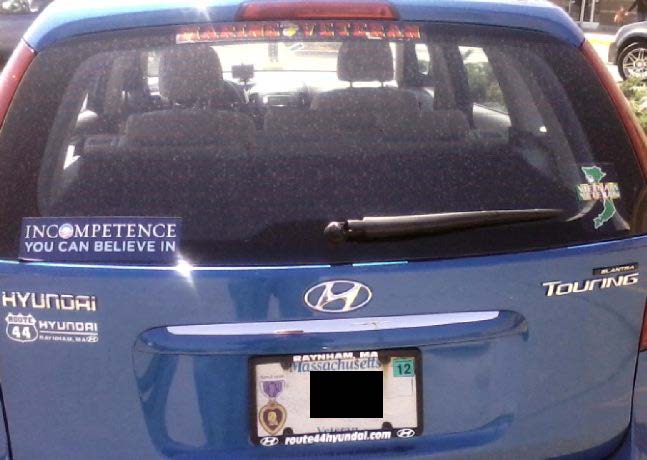 Especially considering who the last Republiklan president was…you know, that guy….the guy none of the primary candidates would mention, and nobody in the GOP seems to remember….He Who Shall Not Be Named.

Although I seem to remember his initials were GWB.

SHHHH!—we’re never supposed to mention HIM!

You know what beats that?

The prominent role Jimmy Carter has at all the Democratic conventions.

Will Al Gore and John Kerry, the Dems’ last two hopefuls, also have such prominent roles?

Or will Al Sharpton fill that uncomfortable void again?

Don’t you think former Democratic presidential candidate John Edwards would be a good choice to speak at the national convention? Like President Bubba, Edwards is a proven liar and adulterer – two qualities that Democrats seem to admire in their party leaders. Even if Edwards is convicted in that pesky trial currently being prosecuted against him, we have the technology so he could give a speech from his jail cell. How inspiring that would be for the base.

However, you do make a very strong case for Sharpton being the perfect Democrat spokesman. With his history of anti-semitism; inciting race riots in Crown Heights and Harlem; admitting under oath to engaging in massive voter fraud; and currently owing back taxes of over $2 million, his values so mirror that of the Democratic Party it is mind boggling to me that he somehow did not get the Democratic nomination when he ran for president.

Sharpton, Edwards, Carter, Kerry, Bubba…they’ve got an embarrassment of riches from which to choose.

Edwards crossed my mind, too. But I hate to pile it on. And, remember when the Dems had Michael Moore as a guest at one of their conventions? They don’t seem to go near him anymore.

Oh, you mean George W Bush? Who’s not mentioning him? He was a pretty good president until his last few months, and it wasn’t long into 0bama’s term before there were signs all over the country showing that people missed him. Nobody’s hiding from him or running from him. If he were up against 0bama today he’d defeat him hands down.

LOL…that’s a really good one.

I’ve a mind to get some ’08 vintage bumper stickers for Obama and put them on my car, distress them a bit with the kitchen scrubber so they’ll look old. Then put new “conversion” and remorse stickers on the car.

If enough people did it, maybe others would realize it’s okay to feel like they’ve been duped.

Sally, I guess you missed the memo. 🙁 The Peter Principle has been renamed the Bush Principle.

Oh, I got the memo: Bush kicked the tires but Obama bought it and took it with him to the White House.

The owner of that car is a purple heart winner.

Or did he fake it?

I believe, I believe …

She told me, ‘It can break your heart
And put you in misery’
Since I met this hopey campaigner
I feel it’s happened to me
And I’m tellin’ you

It’s too late to turn back now
I believe, I believe, …

I want that sticker.

Er, that was in reply to Maggot at Broad & Wall, upthread.

(See? I’m embarrassed and I express regret – thus, NOT a Democrat)