On May 1, Carbonite will release its 1st Q 2012 results after the close of the markets, and will host an investor conference call.

At that time, we may get the first glimpse into whether and to what extent Carbonite’s famous March 3, Saturday night jettison of its sponsorship of Rush Limbaugh has affected new subscriber and retention rates.

As discussed previously, Carbonite’s business model is premised on high growth in its subscriber base and moving subscribers to higher cost plans, and sponsorship of Limbaugh was a critical part of the strategy.

The 1st Q numbers only will be a sign, and will not tell the whole story since the 1st Q includes less than a month after the time of the Limbaugh announcement; nonetheless, there should be clues.

If recent movement in the stock price is any precursor, the market is not expecting good results.  After a precipitous drop in Carbonite’s price after the Limbaugh announcement to just under $8 per share, Carbonite experienced a (dead cat?) bounce up to $11 per share by the end of March.

But since the beginning of April, Carbonite has been on a steady slide, and now is back down almost to its post Limbaugh low.  As of this writing the stock is barely above $8 per share: 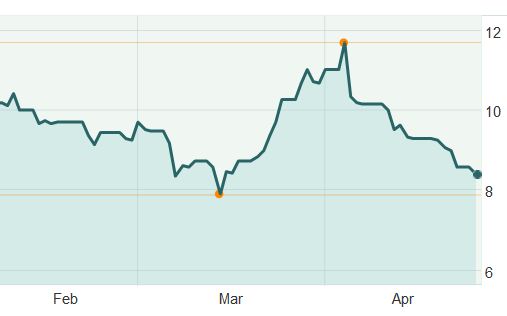 The Limbaugh factor certainly is not the only thing which must be weighing on investors’ minds.  The rollout of cheap online storage programs by Microsoft and Google likely will slow the growth of companies like Carbonite which charge premium prices.

It’s a time in the life of Carbonite when more than ever it needs to shore up its consumer loyalty, the exact opposite of what  its politically driven March 3 actions likely achieved.  But we’ll find out more about that, perhaps, on May 1.

William, I for one just didn’t renew my subscription. I only had a little over a month left and just decided to let it run out. I’m now looking for a new backup service. Any suggestions anyone?

I just let mine lapse also. I’m giving “Backblaze” a try. No iOS apps for remote file access, but then again, I never used ’em in 2 years as a Carbonite subscriber.

You should check out Crash Plan (www.crashplan.com). Has excellent pricing, and works for PC, Mac, and Linux. Also has mobile apps which you can use to access your files.

I use Mozy. You can buy HUGE external hard-drives cheap, too, but you really need to store them off-site for security, and be religious about doing the back-up.

I was going to sign up for Carbonite after I got screwed by Mozy….But I don’t need a company stifling free speech under some bizarre double standard hypocrisy. The only company that needs to be political is Two if by Tea 🙂 Geez that stuff is delicious!

So now I’m signing up for SugarSync. Unlike the others it syncs across platforms sort of like dropbox so that you change something on your hardrive and it is updated on SugarSyncs servers and it backs up portable hard drives, etc.

I was angry that Mozy was automatically backing up sub folders but that situation is several years old and they may be more effective now.

But when I compared options as a consumer bulldog last year SugarSync came out on top for sure.

Love the blog–read it everyday in my google reader even though this is my first time to comment.

Suggestion: Use Acronis back up & recovery software. Use your own private back up hard drive, which you locate remotely within your office or home. Wireless versions are availble now. If you want the ideal set up, do the above, but also have a PC with RAID 1 Array … e.g., built in real time back up hard drive parallel to your main hard drive. RAID 2 or more is an option. Benefit of a Raid array set up, near instantaneous recovery if main HDD fails. Main “like” for Acronis is that the back ups are encrypted, but readable by the owner when necessary.

You don’t care about real privacy, then go ahead and use some on-line outfit, who may or may not protect squat. Think: AOL’s long gone version with FTP features … you had files there? Too bad, they be gone.

Professor, who would trust Google or Microsoft to store their private files?
Not me.
Got my own hard drive. Works just fine.

I dumped Carbonite. It is like one of those patties I leave out in the field.

Speaking of dead cat bounces, I wonder if we’ll have another wreckovery summer?

If the main stream media has anything to say about it you will see lots of positive economic news no matter what.

Maybe Carbonite’s top two execs (and Founders) David Friend and Jeffry Flowers see the writing on the wall. Starting April 2nd, both have been selling just under 2,500 CARB shares every trading DAY. During that same period, there has been NO insider buying. And over the past 3 months, insider selling outpaced insider buying 8-1. Not a good sign.

When I first looked in to Carbonite, I wondered how long this divesting would take … sooner than later it appears. AT&T was hyping and “selling” it as “failsafe” (Hah!)so I was already leery. As others have said, for small file users, the “cloud” satisfies some folks (not the paranoid people like me, however) so I couldn’t see a long future for Carbonite. Appears I was right, and the bail out proceeds a pace. Too bad. Hope they advise their customers before vanishing in to the ether.

With today’s news about Google Drive, and the past week information regarding Microsoft Skydrive, when you can get 5gb and 7gb (or Dropbox’s 2gb) of cloud-based backup for free, why pay for Carbonite anymore anyways?

No offense intended, but 7GB “free” is not nearly enough for substantial files, photos-videos, and database materials. Putting critical information “out there” is too scary for me, although I do use “Yousendit dot com”, subscription version, for large file FTP and very short term on-line storage (usually 2 weeks, then erased). I’ve no interest of setting up a personal site or FTP capability … just not enough traffic overall.

As I said earlier, I was one of AOL’s early customers for their FTP and file storage site … then they just went out of the business, no notification, and Lord knows where said files went. I trust me first, period … and had my own back ups.

Try Acronis back up software with a physically secure back up HDD. You’ll like it. Acronis allows the owner to peruse files and folders on the b/u hdd in the original version in “read only” format for otherwise encrypted files. You can line item delete or import change and re-export….or Acronis will do it for you on a schedule you set up. I’m not a rocket scientist, so daily is often enough for me.

My better half is a mega data processor and desktop publisher and uses back a up HDD locally, plus the RAID 1 array HDD in her main PC.

Of course, your mileage may vary depending upon your comfort level.

If you’re *actually* willing to pay, Google and Microsoft, and Apple will get you 100GB for that same Carbonite $60 a year. And if that’s not enough there are dozens of online cloud-based storage folks *exactly* like Carbonite.

While you’re talking about oranges instead of apples, my home setup is a NAS with RAID 6 setup with a spare disk, which means I can lose 3 disks from my setup without losing data. However, a NAS/RAID is not a total solution; you still need to get data off spinning disks. Whether that means in the cloud or onto other storage media (Bluray/DLT/etc) depends on your risk tolerance.

But then this discussion moves from the point of our esteemed bloghost and my add-on point: Carbonite’s profit margins are about to be squeezed by the big cloud players, which will negatively affect their stock price in addition to their marketing blunders.

I agree with you regarding a need to get data storage off spinning disks …IF your need is that critical. Otherwise, redundancy is sufficient for most people. The redundancy you have in your system exceeds mine, and that’s a good thing, and the probability of simultaneous failures is very remote. Risk of failure probability is key, in my humble opinion, anyway.

As for Carbonite, I presumed they were a one trick pony up front and expected them to get squeezed sooner than later, then just quit, as AOL did. We’ll soon see.

I am not a big Limbaugh fan, but what Carbonite did was rather stupid in my estimation. I am a current subscriber to Carbonite and I actually like them. I’ve had to restore things at times and though slow it always worked. I have a sub until Dec. 2013, so we’ll see how it goes. As a backup, pun intended, I am also looking at Crash Plan. I also backup locally so I do have redundancy.