Considering the bumper sticker below, spotted in Ithaca, a little history lesson is in order:

The Saint Patrick’s Day Four (also, The Saint Patrick’s Four, or SP4) are four American peace activists of Irish Catholic heritage who poured their own blood on the walls, posters, windows, and a US flag at a military recruiting center to protest the United States’ impending invasion of Iraq. The four consisted of a Vietnam War Veteran, former Binghamton City Mayor John Burns’ son, and two sisters. Peter De Mott, Daniel Burns, and Teresa and Clare Grady each are members of the Ithaca Catholic Worker community, which teaches that Christians should practice non-violence and devote their lives to service of others. They each served between four and six months in federal prison for their action on Saint Patrick’s Day, March 17, 2003, in Lansing, New York, near Ithaca where they reside.

The group’s support website now is defunct, but partially available at WaybackMachine (this page from 2007 shows the trial results and sentences). 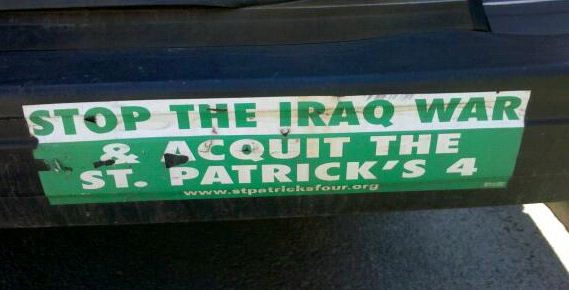 What a crazy idea. What would Jesus think of such a crazy idea? Oh yeah….he’d probably agree with it.

And here you are, trolling.

Which is neither being a peacemaker or serving.

Are you saying this is Scriptural, or Catholic doctrine?

Non-violence and the service of others is a laudable goal for everyone. Be sure to bring that up at the next meeting of your Gay/Lesbian/Transsexual/Bisexual Muslim Outreach group.

Jesus was non-violent?! Not the one in the Bible.

Ah, THAT was a very different DOJ that convicted the 4.

If for no other reason…and there are PLENTY…than to rid the nation of Eric Holder,

OBAMA MUST BE DEFEATED.

Rags: so, has the date of the formal surrender to those brave and noble Native Arabic Freedom Fighters been made yet? Pretty obvious that it will be scheduled for some date after 11/6/12 and before the end of the year! Doing so will make the hearts of those NAFF’s sing with joy!

On the other hand, additionally, maybe a presidential pardon for all those poor lost souls in Gitmo would be the way for el Presidente Obama, our gracious Dear Leader, PBUH, to go; again targeted for that same time frame mentioned in the previous paragraph.

Also, but just slightly off topic, when would be appropriate for el Presidente, PBUH, to return Gitmo to its “rightful” owner, from whom we stole it many years ago?

President Pond-Scum HAS to maintain the fundamental contradictions he uses constantly, while inching his way toward his goals. Nothing so overt as pardons or closing GITMO.

Well, the “war” was brought to a “successful” end by Husein, now all he has to do is issue 4 Present-pardons and he will score one more voter.

DocWahala, only liberals would use blood to desecrate that which was paid for in blood. By their reasoning, I should be able to achieve the same protest by wiping my ass with “Audacity of Hope”.

“I said, for instance, that even if you have a child two years of age, you need to go to work… I want individuals to have the dignity of work.”

Obviously, different rules applied when it was his ‘two years of age’ child, and his wife.

Not so much about the ‘dignity of work’ then.

And the conservative War on Women continues.

Aren’t you the groaning hypocrite pretending some understanding of Christian doctrine?

As with most Collectivists, you pick and chose; then you lie.

Yes, all too typical that the lefty who preaches ‘Christianity’ proves all too willing to distort and mislead.

Almost as if his understanding of Christianity is based on cartoon concepts rather than actual heartfelt belief.

4. Make the enemy live up to their own book of rules. (Which you should feel free to misinterpret as it suits you. Rags)

that’s an interesting Romney quote … he is talking about the work requirement and welfare reforms. Since Mitt’s family is not a welfare family, no, obviously the Romney household understands the dignity of work.

But this quote is the buzz now, should the child have the mother home and government be the daddy, or should the woman give the family the “dignity of work”?

I can appreciate Romney’s ideal of increasing welfare work requirements, even for single mothers. But a REAL conversation about welfare Moms will be nearly impossible. I think most agree there is a problem with welfare Mom’s that stay home and have five to ten kids, incentivized by the welfare system. Have we broken that cycle?

It was Bill Clinton’s plan, too.

Well, it was when it was forced on him. THEN he was all for it.

The dignity of work consists in not being supported by others. If a mother can afford to stay at home with her kids, and is temperamentally suited to doing so, then of course she should. How can anyone imagine it’s not dignified to live on your own resources, or compare that to living off charity, let alone of money forcibly extracted from its owners?

“to protest the United States’ impending invasion of Iraq”

Curiously, these lovers of peace never got around to protesting against Saddam or the Ayatollahs or any of the many communist regimes of Eastern Europe and the Soviet Union.