This is so 2008.  I bet many of the yutes don’t know what it’s about, and not knowing the source, probably think the owner of the car is racist for describing himself as a “typical white person.”

What’s most surprising is to see this in Newton Center, MA, which is the belly of the beast.  I know the area well, and if the beast’s belly had a belly, the various Newtons would be it.

From reader “M” who prefers to be completely anonymous, because, well, it’s Newton Center:

Here’s a bumper sticker I saw on the streets of Newton Center. (Along with the much more common “Nobama” sticker). It causes one’s heart to beat with hope to see such things deep in the heart of moonbat land.

Looks like an old sticker, but it takes on new relevance in Obama’s current campaign of racial polarization based on his imagined son being gunned down. 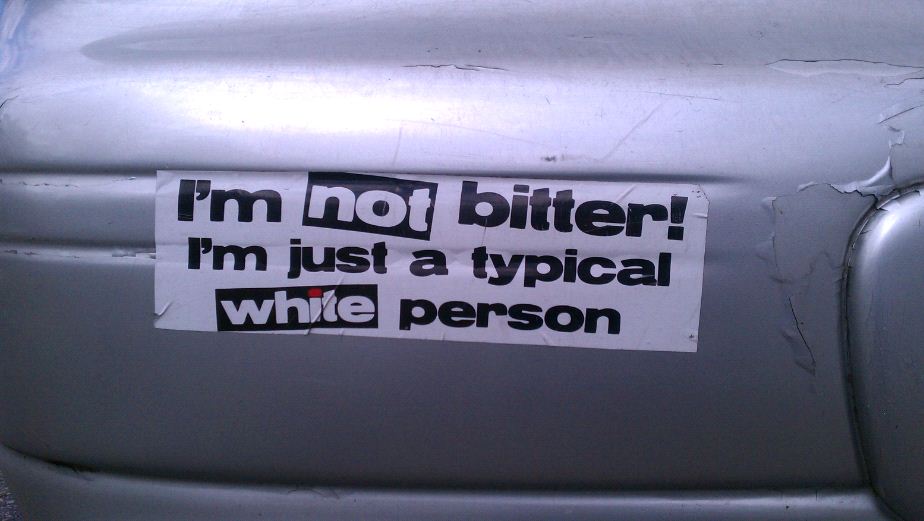 It causes one’s heart to beat with hope to see such things deep in the heart of moonbat land.

I must say, it encourages my heart, too.

Can someone give me a refresher on this one? Is this about the “bitter clingers” quote from Teh Won back in 2008? Or is it a mash-up of his faux pas regarding his description of his mother/grandparents…….?

There has been so much cr*p over the last 3+ years, it all seems to run together (sorry for the “graphic” pun, if you get my drift). 😉

Is this a ‘whitey’ ‘honkey’ who has seen the ‘light’ as preached by Ferrakhan/Wright/Bell, and has resigned him/herself to perpetual ‘dhimmitude’ of whiteness and thus inferiority?

Or is this a white male/female who is rebelling against anyone’s racist notion that all men/women/children are not created equal (in value, if not intelligence, ability, accident of birth) regardless of skin color and should be given equal protection, advocacy, opportunity (to achieve according to their potential) by law (not equal income)?

They write it as ‘Newton Centre’, which tells you something.

Living on the Left Coast, I interact with lots of Chinese and Indians. It can be amusing to hear them tentatively express their thoughts about “Caucasians”.
I always say “That’s CNN-speak. We call ourselves ‘white people’.” It’s rare not to get a smile.

The best view that I’ve come to is that at least Romney has a clue about how economics works. Obama, on the other hand, shows us why he won’t release his college transcript.