A bumper sticker is worth a thousand words

A bumper sticker is worth a thousand words

She’s been taking photos for over two years. Here is the first of them taken in High Springs, FL, with her message:

I came across you web site and have been enjoying the bumper stickers posted. I thought you might enjoy a few that I have collected along the way (I will be sending a couple different emails with pics): 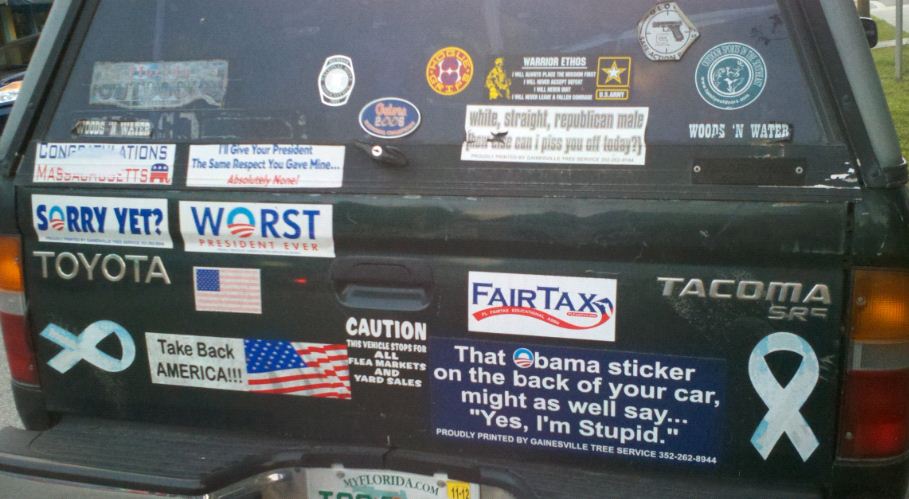 I really like the one that says “I’ll give your president the same respect you give mine. Absolutely none.”

Of course, after the way Bush was appointed in 2000, ignoring all warnings until 9/11, the mistaken invasion of Iraq, Abu Ghraib, Katrina, Terri Schiavo, and a collapsing economy, there is a reason Bush left office as one of the most unpopular presidents in modern history, and good reasons why he gets no respect….he deserves none.

Did you notice that during this long primary campaign, Bush has been “he who must not be named” for all the GOP candidates? Nobody wants his endorsement for fear of the black mark it would leave.

Your reasons for giving Obama no respect are largely because you’re resentful creeps…you don’t have much to go on besides that.

He walked into the world’s toughest job and directly into a freefall not seen by a president since FDR’s first day, and while he may get no respect from you yapping fools because you are still sore about what a trainwreck Bush was, that says more about you than about Obama.

You’re living in fantasy land if you think O is doing a good job. He didn’t “walk” into the job, he waltzed into it thanks to the media. He’s nothing more than an imposter/agitator who’s lived off affirmative action all his life.

The “media” didn’t have much to do with it. Bush was a disaster and everybody knew it. McCain had a chance….not much of one, but a chance…and then he blew it by picking the dingbat from Alaska. Nobody took him too seriously after that.

Sorry if you don’t think Obama is doing a good job. Opinions differ….lots of liberals agree with you, but for different reasons. Hard to judge, though, under current circumstances, and with the Republicans not wanting to help America, but rather wanting to hurt America. This is a time when both sides should pull together to get us back on our feet, but you conservatives are deliberately against that idea….because you are hateful people.

You do not want to help America, because your insane and ridiculous hatred for Obama overrides any duty to your country you might feel.

And obviously, neither is yours.

Besides, the one who’s practicing hate is YOU, who freely and shamelessly accuse us of hate.

I love God, family, country, freedom, enterprise, humanity. It’s people like YOU I have to wonder every day why the heck I have to stand around and stand up to.

You show me one Obama, and I’ll give you MILLIONS upon MILLIONS of people who have ten thousand times more dignity and qualities worthy of respect than any he has ever had. He knows they’re out there and he can’t stand it – that’s why he wants to destroy them, any way he can.

That’s what Marxists like him do: envy is their mother’s milk and their sustenance, and hate is their banner. And you seem to carry his banner with such pride! Marxism – what Obama practices – is a pestilent scourge on humanity, like the bubonic plague that decimated Europe in times past. And you, like the rats that brought the plague boarding ships into European ports, seem to be a happy carrier.

Let me give you a warning from the seventeenth century:

“Beware the fury of a patient man.”
– John Dryden, Absalom and Achitophel (1681)

And a warning from the 21st: “We Surround You!”

You have the plague. We the People have the antidote.

My brother did Harvard Law after his 7 years at Johns Hopkins (Surgery). Apparently, he was “fair to middlin'” and yes, and Affirmative Action hire at the Law Review.

The only Editor in HISTORY never to be published.

So I’d like to the join the Corpse-men who speak Austrian in saying, “Throw that Slime out of the White House. He simply does not belong there.”

What strikes me as funny, maybe … with a “definitely, ROTFL” if the People are smart enough to eject him on Nov. 6th … is how the twats COUNTED ON a Recover. Always happens, right? Remember Clinton’s “Stimulus” to take credit for 4Q1992 growth…?

Well, guess what? MAOBAMA F’D IT UP. As predicted. By me.

NOW the Leftist Twats have to face a cold, hard truth:

Drilling for oil and repealing Obamacare — that ALONE will yield 4% growth. And you will be ON THE SIDELINE for a couple of decades.

Personally, I’ll laugh like Hell … especially when every rule, every reg passed under Obama is repealed. Might as well call him “Akhenaten” … google that.

Correction: “and YOU will be on the sidelines” not you, THEM ….

Since YOU, true to Leftist Form, went for the Ad Hominem … here ya go:

You Scumbag. You Idiot. You advocate Amoral Asshole Policies. And you DO NOT UNDERSTAND THE OTHER SIDE.

THAT is the problem with Liberalism — it is, LITERALLY, a MENTAL DISORDER:

Worse yet, liberals don’t know what they don’t know; they don’t understand how limited their knowledge of conservative values is.”

Now, be aware. The Sleeping Giant has been awakened. James Madison smiles upon us from Heaven. THIS COUNTRY WAS FOUNDED IN LIBERTY, INDIVIDUAL LIBERTY. And worthless, lazy Scumbags like YOU, too STOOPID to MAKE IT, are not going to STEAL much longer.

I hope to meet you some day, in an elevator. I’ll drop you off in the basement, because you are exemplary of the ENEMY — of Freedom, of America. So go f*ck yourself. Get ready to relive the 1980 Election….

That is all. Have a nice day.

I’ll see you Bush’s 8 months and raise you Clinton’s 8 years.

And that’s the same CBO we were supposed to take as gospel when the cooked numbers of Obamacare were being discussed.

Who won the State of Tennessee in 2000 and what would have been the ramifications if it had gone the other way? What does it say about a candidate that cannot win his own state? Never mind the clear fact that even the liberal rag The New York Times concluded that GWB won Florida. Gore v. Bush went 7-2. That would mean clearly that even those on the Supreme Court who find the Constitution to be flexible and malleable to their taste voted in favor of stopping any further recounting. Your point is eviscerated.

I greatly respect GWB for the job that he did as president – and I am not going to rely upon polls to come to my conclusion. Did I agree with everything that he did? Of course not. Do I feel that he did a remarkably good job given the incredible challenges he faced? You betcha.

Do I respect Obama? Not in the least. I think his words and deeds show him to be an Anti-American Marxist poser who should not be in a suit in the White House, but in a jumpsuit in prison. This man is a traitor to his nation, suffering our allies and embracing our enemies, maliciously destroying our economy with his socialist policies and his divisive rhetoric. He is not of us – he has no allegiance to the very people who he is supposed to be leading.

Right back at you, sunshine. I have no use for you or yours. You can take your perverted view of how this country should be governed and stick it where the sun doesn’t shine.

It’s about time to ask the salient question: since it is quite clear that we cannot coexist with these traitors to our nation, when are we going to rise up and tell them that if its a socialist utopia that they want to establish then go somewhere else and give it a try.

You are no longer welcome here.

Clinton has been the sole exception, and has started being active again, perhaps shooting for U.N. secretary or some crap.

No, Mr. Clinton is looking for the title of “First Husband” in about 5 years when Hillary runs again.

I’m surprised, Griddlefry. You forgot to include RACISM!!! in your list of left wing talking points. That little omission might hurt your standing among the legions of Obama myrmidons.

That last sticker from Gainesville is funny, especially since the person sporting it likely voted for Bush twice. Yes, stupid indeed.

A long time ago I was driving in the Florida panhandle and saw a bumpersticker that said:

“Gainesville, Florida. Drive east until you smell it. Drive south until you step in it.”

A motherload or a mother lode?

Or a bumper crop?

I’m leaning towards the latter, I think.

you kind of have to feel sorry for him. the pain of being that stupid must be immeasurable.

I imagine it must be painful to create a singularity of stupidity each time he opens his mouth or types on a keyboard. I know it’s painful for me to witness.

Well, isn’t THAT special! (in my best church lady voice)

No, in Southern it’s “Well, bless his heart.”

My condolences for your double whammy:
Griddled brain AND Obama’s base.

Then again. One and the same.