A boycott based on deeply held beliefs

A boycott based on deeply held beliefs

Apparently, this owner does not even though his vehicle has a “Boycott BP” sticker on it.  The gas was probably a penny cheaper than the boycott-free stations down the street.

I spotted this guy filling up at a BP station in Fort Wayne, Indiana. It must be hard to remember the boycott du jour.

Also, thanks for all the great posts on Lugar v. Mourdock. Keep up the good work!

I think things are looking good. For what it’s worth, I’ve seen probably 70 Mourdock signs in Fort Wayne and Indianapolis, compared to exactly one yard sign for Lugar. Not exactly scientific results, but I think telling nonetheless.

Your quote: “In order to win, Lugar needs to lie about Mourdock; in order to win, Mourdock needs to tell the truth about Lugar.” couldn’t be more accurate, and I was happy to hear Mark Levin talk about that on his radio show a few days ago. 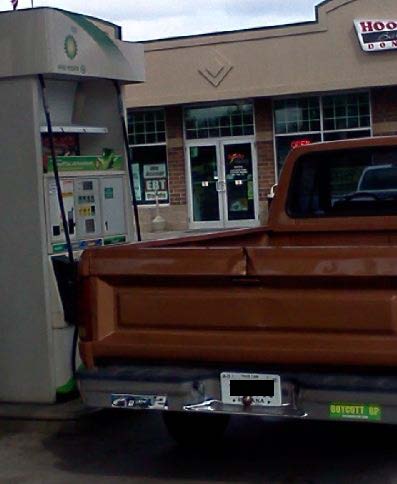 I can hear it now; “Uh, I was only there to get directions on how to get away from there”.

DocWahala, is now looking for a “Boycott Liberals” sticker to put next to his ammo box.

I drove past a business in Elkhart yesterday with a lone Lugar sign in front. My immediate thought was, “Wonder what payback he owes to Lugar”.

I might support this boycott, except stations are private, as I understand it. But there should be more investigation into why BP got away with so many violations … what were their inside connections?

Find the corruptocrats, instead of shutting down all the safe drillers. … but Obama never lets a crisis go to waste, in his war on capitalism. Didn’t Obama take big money from BP?

“OSHA statistics show BP ran up 760 “egregious, willful” safety violations, while Sunoco and Conoco-Phillips each had eight, Citgo had two and Exxon had one comparable citation. ”

this article has one tie to Obama, and links to the earlier article about “BP’s Army of Democratic Lobbyists”

Boycotting the private capitalist station owners made no sense, except in Obama’s Marxist bizarro world.

On the topic of oil and gasoline pricing, etc….

and the Obamic War On America

Boycott BP is so yesterday!