You have been warned

You have been warned

Thanks to reader John, who writes:

Seen this afternoon on an SUV in Chantilly, VA. 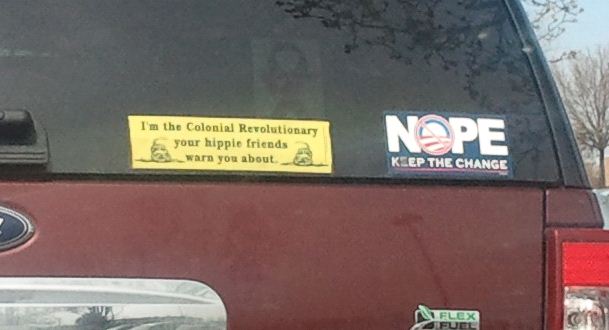 Some are “reluctant rebels” and some are Sam Adams. From the Standford Law website:

“With the possible (and doubtful) exception of Samuel Adams,” Rakove writes, “none of these who took leading roles in the struggle actively set out to foment rebellion or found a republic. They became revolutionaries despite themselves.”

Rakove won the Pulitzer Prize for history for his 1996 book Original Meanings: Politics and Ideas in the Making of the Constitution.

In his newest book, he argues that the American Revolution may never have happened without the miscalculations of the British governor of Massachusetts, Thomas Hutchinson. Those miscalculations sparked the Boston Tea Party, which in turn galvanized a disparate collection of colonial leaders.

“Samuel Adams was, I think, the most consistent radical patriot of all the Americans,” Rakove says. “He just seemed more devoted to the cause.

John Adams is the one who goes back and forth. … He’s somewhat torn between his desire to pursue a political life — or at least to gain public recognition — on the one hand, and his desire to be a successful attorney.”

Some say Breitbart was our Sam Adams. I wonder . . .

I will take a couple, but could I get them with “warned” rather than “warn?”

“Warn” is correct in this instance. Hippies are still among us, and still warning. We call them Lamestream Media Creatures now.

For some odd reason, reading that sticker reminds me of Sarah Palin’s “preposterous assertion” that Paul Revere warned the British.

You know, I’m so fed up with all of the political machinations against our freedom that even the “submit” button on the comment screen makes me twitchy.

Sounds like you need to step back, and find something else to #occupy your mind.

Could change the button to ‘Islam’ oops that wasn’t pc of me. Maybe ‘Publish’ would be better?

“Bend Over Please” if the FCC has their way