Um, excuse me, haven’t you forgotten someone?

Um, excuse me, haven’t you forgotten someone?

I mean, you know, the guy who made the gutsiest call and most audacious plan in the past 500 years.

From Linda in Tennessee, who spotted this vehicle at Macy’s in Frankin, TN: 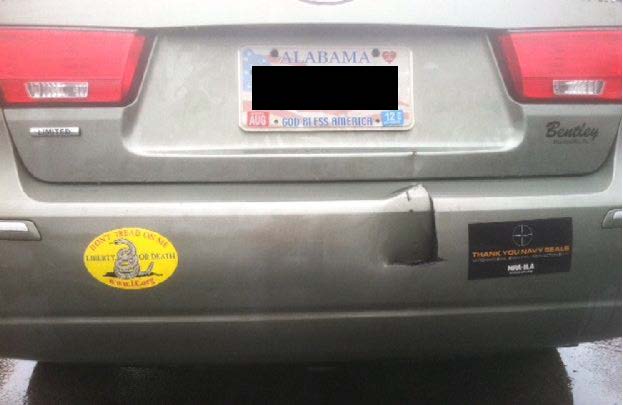 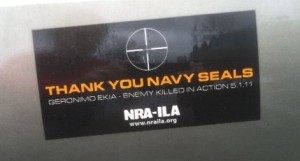 It is the Gadsen Flag that is the standout.

Regarding the OBL thing – the loss of the helicopter was too heavy a price to pay. Tell me that a military barracks did not jump out of bed on hearing those choppers. Or are they especially quiet.

Unless they had permission would not the Pakis think they were being invaded?

I just can’t buy it.

Loss of a HELICOPTER was too high of a price?

I guess you’d rather Bin Laden was still around, planning attacks.

“I mean, you know, the guy who made the gutsiest call and most audacious plan in the past 500 years.”

Oh, YEAH…and he’s the father of the Keystone pipeline, too!!!

I thought this was just too precious….

“Consider: During the warmest winter in modern memory, fossil fuel companies cooked up new plans to bake our planet once and for all. Defying public outrage and a presidential rebuff, they laid tar sands pipelines. They imperiled our water supplies with poisonous fracking. They went on drilling and spilling oil in our increasingly lifeless seas. And they continued to move whole mountaintops for that supreme carbon bomb: dirty coal. Since the first Rio Earth Summit in 1992, our global governments have enabled transient fossil fuel interests to come before the survival of the 100%. The same Wall Street that foreclosed on millions of Americans’ homes are now busy foreclosing on Earth. If there’s a time for Americans to awaken to the climate vortex that is swallowing us whole, 2012 is it.

(SNIP)
Specific actions throughout the month will target the biggest players in the industry: Big Coal, Big Oil, Big Gas, Big Nukes.”
From the OWS website.

They left out BIG SCUM.

I think BHO has done so much for our nation already that he should retire early. He and ‘chelle deserve a trip to Disneyland.