There’s no such thing as a free peace

There’s no such thing as a free peace

From frequent photographer Bill who took this photo at his doctor’s parking lot the other day: 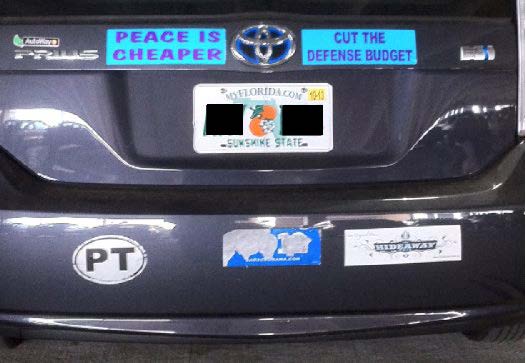 Bonus question:  What does the blue sticker below the license plate depict?

“Peace is cheaper” and surrender priceless.

Isn’t that a “GO Notre Dame” (AKA Fighting Irish) bumper sticker on this fine of a St. Patrick’s day ?

Uh whoa! What about the sticker for the Deeny’s Hideaway swinger pervert club?

The photographer emailed me that it looked like the “bonus” sticker was a partially torn off Obama sticker.

The blue bumper sticker looks like it could be a torn Obama Biden decal that’s shown on the bottom left Here.

The PT is the automobile designation code for Portugal. Before the EU each European country used such decals. Now the decal has been replaced by its designation on the left blue field of the EU number plate.

American soldiers, airmen and sailors serving in Europe were issued USA stickers and special license plates for their private automobiles, at least back in the 70s. It was covered as part of the SoFA that governed their presence in Europe…

The US uses the EU plate now. They have USA in the blue field. It looks like the German EU plate. The city designator on the plates is something that German don’t use. AD & HK, I think.

The stickers on the back are gone, for the most part. Switzerland may still use them since they are not EU.

The Won converts another to a bitter clinger

As it was, Hitler worked very, very hard not to give cause for the US to get into the war.

Though in the big picture, Japan attacking us was the best thing that could have happened for Europe.

Heinz Guderian, a German general interviewed by French officers after the Second World War, claimed: “If you French had intervened in the Rhineland in 1936 we should have been sunk and Hitler would have fallen”. Hitler himself said:

Peace due to wishful thinking becomes the most expensive thing known to man.

Freedom may be “expensive.” But it ain’t that expensive.

I recognize the continental outlines from a Re-Unite Gondwanaland sticker.