As posted yesterday, the people still pushing the Limbaugh advertising boycott rely on bombarding advertisers with Twitter messages, and have developed strategies to maximize the apparent number of tweets sent to advertisers, through retweets and multiple tweets by single users.

It is not hard to see how an advertiser could receive thousands of negative tweets generated by a relatively small number of people.  Do the math, 100 people tweet 10 times, then each retweets each other and so on.

One such effort is by the “Boycott Rush” movement led by two anonymous Twitter users plus failed congressional candidate Krystal Ball.  As an aside, the Boycott Rush group is upset with me that I credited Media Matters’ “Stop Rush” effort.

Although the Boycott Rush movement apparently denies a connection to Media Matters, the notice at the bottom of its website seems to coordinate with Media Matters:

The link goes to a web page which then redirects to an online collaborative project called The StopRush Project, which was set up on March 7, as detailed in this post.  By that time almost all of the high profile advertisers who dropped Rush had done so.  The post draws a connection to OFA, but I don’t think that’s proven yet.  The post does provide interesting detail on how advertisers were tracked, contacted, and how lists were maintained of targets, and the effort continues.

Today’s target, apparently, is @Staples, although it is not on the list of targeted national sponsors.

So today, apparently, @Staples will receive hundreds if not thousands of hostile tweets, generated as part of an organized effort, but it will look spontaneous.  That’s how the Twitter war is fought.

Put aside that today it’s Rush.  The tactic of bombarding advertisers with organized Twitter efforts which appear spontaneous could be used against any advertiser against any person, conservative, liberal or otherwise.

There is no way to stop it, but there is a way to blunt it.  The answer to the Twitter war is sunshine.  Let the advertisers know that they are being contacted as part of an organized effort, not a true consumer reaction.

I sent a message that basically said, “Did you know that you responded to pressure not by consumers but by democrat operatives?”

That’s why Rush had no choice but to get active on Twitter. With over 150,000 followers on his two Twitter accounts, there is plenty of sun to shine.

Update: I discuss the Limbaugh boycott on Pundit Review Radio:

And here’s some of the @staples activity today: 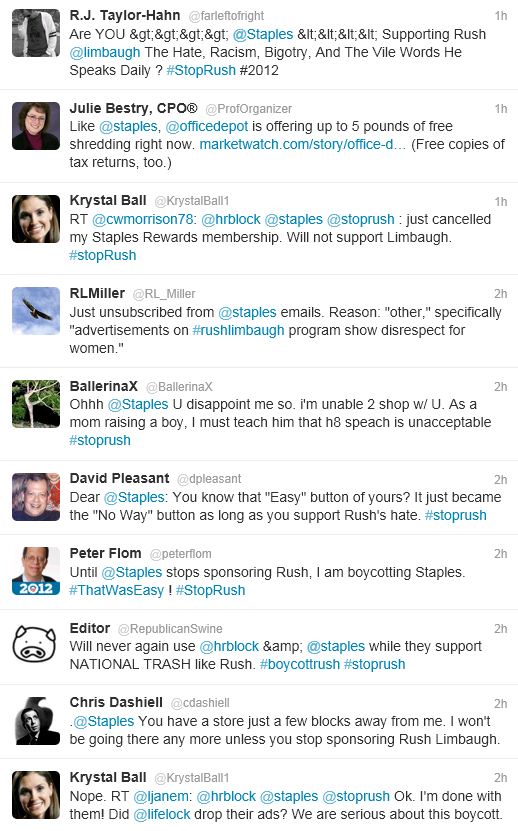 @Staples I am an attorney who runs his own office, a customer, and a Rush Limbaugh supporter.

My point exactly in a post last week. Effectively, the Fords, AMEXs, and rest are permitting these organizations to speak for them. Don’t kid yourself, it would stop in a heartbeat – instantly – if they want it to. If the Ford Motor Company really wants someone to cease using its name without permission, or hold them accountable for misrepresentation, it can do so. The absence of such action on the part of these companies shouldn’t be construed as support for the “boycotts,” but, then, does silence give assent? It will be interesting to see what happens. OTH, cutesy pip-squeaks like Carbonite, eh.

The good professor would be heartened to know that he’s helped motivate a good number of us to get more involved via Twitter.

Continuing the Breitbartian #war, though “sunshine” is such a happier, less martial metaphor….

The good Prof and LukeHandCool! Got started yesterday and ended up glued to my computer for hours. I think we are on to this tactic and can offer a sunny counter assault to their fascist ploy. @MlleBastiat

Yep. Spent way too much time reading tweets yesterday. Always happens with new toys. Gotta step back and exert a little self-discipline today. “I will not check twitter until I’ve finished everything I need to do today.” Easier said than done. Must resist. Maybe check it once a week.

Wow, from sweet and innocent to twitter junkie in two days. You’ll be homeless by Easter.

It should definitely be a contolled substance.

It’s great seeing so many new enthusiastic voices on Twitter. Thanks, Prof J!

So today, apparently, @Staples will receive hundreds if not thousands of hostile tweets, generated as part of an organized effort, but it will look spontaneous. That’s how the Twitter war is fought.

Maybe someday someone can do a “Quickmeme” picture of the Professor – “I helped Twitter go the way of the CB radio of the 80’s”.

Which, if the target folks LOVE spam like I do (NOT at all), will very quickly cause them to simply mentally ashcan the tweets they get that appear spammish.

The good thing is – when you search “Staples” into twitter you get a lot of stuff about the Lakers, Clippers, and Kings. (There are 28 home games @ the the Staples center in 28 days this month.)

Whether their intentions are good or bad … the left always creates a complete mess.

You don’t even need 100 people if you automate it. It might just be one person. At least it’s probably not Bill Maher.

I signed up for Twitter just to follow Rush, but for the life of me I can’t see the value of it. I’m no technophobe, but it just seems like a tremendous time-waster.

Facebook’s a little better, but after re-connecting with old classmates and friends a few years ago, I rarely need to check in there either. (That should make investors think twice about the impending FB IPO – there seems to be an arc of enthusiasm which isn’t discussed).

I tried signing up for Twitter yesterday, and bungled my email address and am now stuck in this circular loop where I can’t proceed until I click the link in an email that was sent to an invalid email address.

Anyway, I read awhile ago that FB was starting to be picked up by my demographic (old) and I suspect the same thing will happen with Twitter. In a recent episode of “The Office”, Ryan mentions “Tumblr” – did a little checking on that – sounds like that may be where the young technorati will be next.

Krystal Ball is nothing more than a well kept whore – her outrage is so selective, so finely tuned to only target threats to her party, as to be classified as a mental illness.

The @stoprush campaign is being led by Angelo Carusone, a recent law school grad from the Univ. of Wisconsin and who now works for Media Matters. His other twitter tags are @stopbeck and @goangelo. He lead a long time twitter war against Glenn Beck’s advertisers and had some success while he was on the air with Fox. I don’t believe he ever had an effect on his radio show though.

In my email I just received a $25 off $75 purchase coupon from OfficeMax – wonder if it has anything to do with Staples? Maybe later this week I will get something similar from Staples – maybe $25 off $50. Competition & Capitalism rocks my wallet today! Please keep this going, #stopRush.

I get those all the time from Staples, OfficeMax and Office Depot. Office Depot is the most consistent. So, if you will use the discounts, open a Worklife Rewards account at Office Depot.

I tweeted to Staples that I shop with them and to please ignore the anti-free speech StopRush Democrat operatives.

I don’t think it will become a spam war. The Left will tire of it after a few push backs make it irrelevant. They are counting on shock not thought. When the tactic becomes well known (either by lots of opposite tweets to theirs or by media coverage) it will become ineffective.

Guess they won’t be needing those contraceptives after all.

The thing about the Twitter mob is that it only worked once – against the Susan G Komen foundation. It’s already failed against Limbaugh, and it will be worn out by the next manufactured crisis in May. They used up their Occupy gambit too, so it is also out of the picture. The NextBigThing Dot Cute will have to come round before the left has a new tool to overwhelm with imaginary transient drivel.

Eventually, the real people that have to make real profits to keep real companies afloat will figure out that virtual mobs are about 1/1000th the size they appear to be and that the real customer with an account number who writes them a letter on paper and mails it in is the voice they need to pay attention to.

What do these words mean?

I was listening to Rush yesterday and heard a CARBONITE commercial!! I guess he cried UNCLE!!! But – it was not a RUSH narrated endorsement – it was some woman named KIM

[…] by two radical left self-described volunteers who deny all involvement with Media Matters. But as Legal Insurrection has pointed out, the website carried a post linking to Media Matters, asking its followers to let […]