In the future, everyone will be the 99%

In the future, everyone will be the 99%

so long as they put a 99% bumper sticker on their Saab.

….because nothing says “I feel for the little guy” like driving a $45,000 convertible.

Sorry that my on-road photography is so bad. 🙂 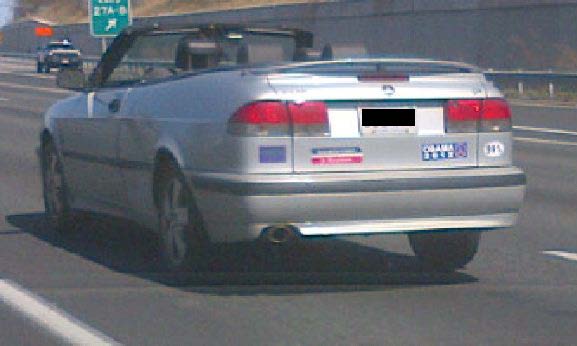 Hah! Hypocrite! For that money he could of had a Volt.

Back in my misguided youth, there was a comedy group known as the Firesign Theatre (I’m dating myself) who did a routine about a guy watching television in a martial law. There was a segment of the show where the late night movie came on and the inroduction to the show, “The Howl of the Wolf Movie” had a part where the announcer made the folowing statement: “Tales of the working class, told by rich Hollywood stars!”

The Saab is just another manifestation of the statement.

A friend of mine, whom I typically refer to as a “starving artist” on account of his being an artist, and having quite literally starved in the past, recently moved way down South, about a half-hour outside of New Orleans – which is now crawling with hipsters.

He recently decided to take his girl, a pretty, skinny little thing, into town, and having certain old-fashioned sensibilities about him, dressed his best for her. On their way through town they were passed by a sprinting hipster carrying a cane and holding his hat on top of his head, which they both, reasonably enough, found to be an amusing sight.

They eventually caught up with the fellow, passing by where he was taking part in a gathering of “occupiers”, at which time this noble representative of the “99%” shouted at my scrawny, working-class friend and his slender, tiny, girlfriend, referring tot hem as “1%’ers”, and wishing them “good luck making it back to your hotel”, in a manner suggesting they would be met with violence if they returned that way again.

That seems to be increasingly all the OWS is left to: Spoiled children threatening people who work for a living. My friend cannot afford an iAnything. When he finally purchased a decent video camera (he works with video a lot), he bought a several-years old model, used, off of Amazon, and still spent more than a year paying it off. But to these OWS wankers he was the enemy – because he was not them and had no interest in entertaining their pretensions.

As disgusted as he is with the intellectual and spiritual dissipation represented by the OWS mob, he took it in good humor, though, sending me a 3:00AM test reading:
“I was threatened by an occupy protester… and now I’m drinking where Faulkner wrote his first novel.”
The contrast in substance and character did not escape him.

I smoked many a bong to Porgie Tirebiter.

Heavy on the thirty weight!

You know, now that I think about it.. ‘We are the 99%” is an inspired group craze movement. Even if adhered to with mathematical rigor, Once the goal of eliminating the 1% is achieved there is no need to update the rhetoric as a *new* 1% has now emerged and the slogan and policies advanced recursively until only one individual is left in the desired class of victim and enjoys the spoils of all the former 1%s before him.

Fortunately, “occupiers” that trash public property and occupy private property are the 0.1%. The 0.01% that we should be investigating are the Corzine and Raines types, right down to the city level. Some 1500 bankers went to jail after the S&L crisis. Now the too big to fails are too big to jail.

Blaming the 1% is a distraction from the corrupt Chicago style politics that has taken over so much of our government. Occupy DC. But maybe a 99% bumper sticker will keep this car from getting keyed by occupiers. Feigned submission?

“How awesome are Your works!
Because of the greatness of Your (occu)power
Your enemies will give feigned obedience to You.”

Excellent photo of annoying vehicle! I’ve tried it; it’s damned near impossie to get anything this legible.

Well done, Roxanne. I’ll be casting my vote for bumper sticker of the year for this Photo

Haha! Annoying is the better discription!

Oh, but nothing says PWN like being the proud owner of a new SAAB…!!!!

As the semi-official (Hierarchical?) leader of the 99% said a few years back: “Words, just words!”

When is the top 1% going to get with it and organize itself into percentiles?