I’ve enjoyed your blog for some time now Mr. Jacobson. Born and raised in western and central NY, I’m well aware that you’re something of a “unicorn” in Ithaca! Anyway, I spotted this sticker on a car outside a diner in Latham (Albany). It seems appropriate to have it on the side where you can view the sticker and the dogs at the same time. Cheers! 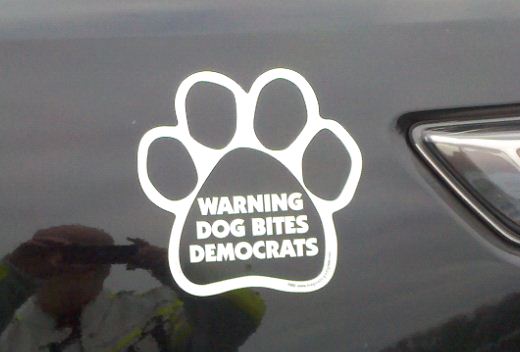 But does he spit or swallow…???

Hahaha! I want one!

And there’s a pic of the photographer in the reflection too! 🙂

My older sister told me that during the 2008 campaign, some college kid going door to door for Obama rang their doorbell. The dogs rushed to the door and started barking.

My sister’s husband, a swift boat veteran, and a very quick wit who acts gruff for laughs but is actually an old softie, glared at the kid through the screen door, and then at the barking dogs and said, “Do these dogs look like Democrats to you?”

My sister said she rushed to the door and told the kid her husband was just kidding, but that yes, it was a Republican household.

She said she insisted he take some cookies and wished him luck. As she told me, “That’ll destroy his image of Republicans as mean, humorless people.”

People: make sure your democrats are up to date on their shots!