From reader Sean, who took this photo in New Canaan, CT:

I’ve recently started following your blog, finding it informative and entertaining and as a non-liberal law professor your perspective is refreshing. I graduated from law school not too long ago and was alarmed at the lack of diversity at the faculty level, to say nothing of the student body. Unfortunately – but not surprisingly – the profession seems to be lopsided in this regard as well.

I’m not sure if this is the correct way to submit a picture to the blog but thought it was worth a shot. To that end, attached is a home-made “Nobamacare” sticker spotted today. 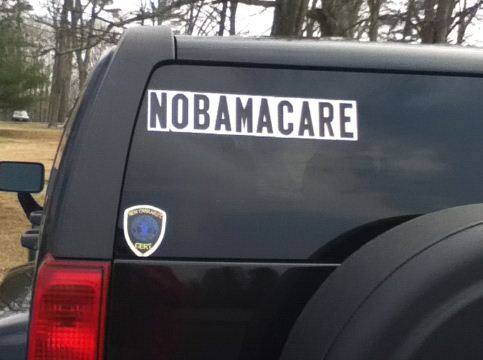 NOBAMACARE is a great slogan for this year’s campaign! NOBAMA generally and specifically with respect to any program. Keep up the good work.

I agree with Sean about the leftward tilt of the legal profession, not to mention the law professoriat.

I think this is related to the growth of what Murray calls the ‘new upper middle/upper class’, which is described less statistically, but more thoughtfully in a series by David Lebedoff beginning with his 1978 essay The New Elite, a 1981 book of same title, and an updated, expanded version in 2004 titled The Uncivil War.

The ABA was completely captured by liberal/leftist activists by the late 1980s and has only gotten worse, though many of the sections seem apolitical enough that it’s worth belonging for their materials and networking.

Gets my vote, too.

Has Obama lost the military vote ??

In a sign of the nervousness surrounding Mr. Panetta’s trip, the Marines and other troops who were waiting in a tent for the defense secretary to speak were abruptly asked by their commander to get up, place their weapons — M-16 and M-4 automatic rifles and 9-mm pistols — outside the tent and then return unarmed. The commander, Sgt. Maj. Brandon Hall, told reporters he was acting on orders from superiors.

Wait. Did their commander get permission from the UN first?

Neo, what craven cowards are Panetta and his comrade fellow travelers – that’s simply incredible. It’s like they understand the population knows they are trying to destroy America.

Thanks for posting this.

HAPPY PI DAY! One of the earliest known approximations of pi date from around 1900 BC, found in the Egyptian Rhind Papyrus. Though the ancient Egyptians didn’t know the value of pi, they seem to have used an approximation during construction of the pyramids at Giza, Abusir, and Medium.

Home made signs like this hold a special place in my heart.