Reader IGCBlogger sent an e-mail with the subject line “not a bumper sticker” and wrote:

Prof: Sorry I’m not a particularly good photographer, but this says “Defeat Obama in 2012”. I took it a few days ago in Sarasota, FL, on Tamiami Trail, a major thoroughfare in the city.

Here is some background info:http://sarasota.patch.com/articles/city-responds-to-sign-controversy 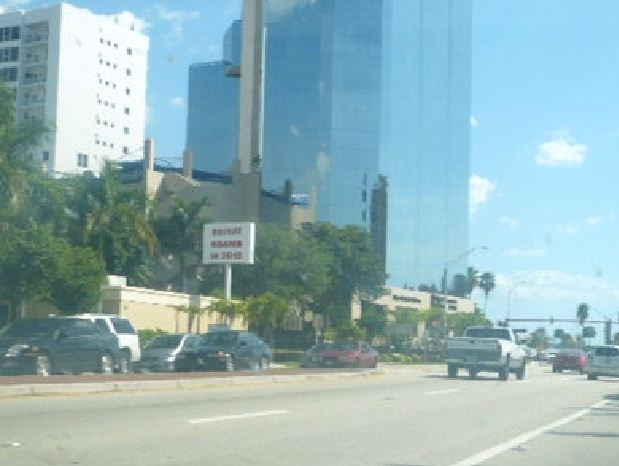 The background is that a Florida investor plans to install 10,000 signs around the country with the same message: “Defeat Obama in 2012.”

As the Sarasota Patch reports, when the first sign went up at a property the investor just bought in Sarasota, it incurred the wrath of an Obama mega-fundraiser:

It’s big, and it has the words Obama and 2012 on it, but what the “Defeat Obama in 2012” sign isn’t is an election sign, according to Sarasota, Florida’s city attorney…

However, Caren Lobo, a Democratic fundraiser and wife of an Obama administration official, wrote to Mayor Suzanne Atwell and the city commissioners expressing concern for the negative impact this sign could have on the City of Sarasota. As noted in the public records, Lobo says, in part, “The sign posting is the beginning of a national movement and Sarasota will be the vanguard. And it seems to a lay person like myself as if the logic to get to a legal approval of the sign has tied itself in knots. How unfortunate to put the city in a position to be used like this.”

Lobo is no stranger to the political scene. She and her husband Dick Lobo hosted First Lady Michelle Obama in January at their Sarasota home for a fundraiser for President Barack Obama’s campaign.

Dick Lobo is the director of the International Broadcasting Bureau, which oversees the U.S. Government-produced news site Voice of America. Dick Lobo was recommended for the position by Obama and was confirmed by the Senate.

Government media watchers are speculating if Dick Lobo could be appointed by Obama to fill a vacancy in the Broadcasting Board of Govenors, following the January fundraiser.

The Patch ran a reader poll which, as of last night, showed the following public response:

This is just the first of 10,000.  I think the investor who is paying for the signs is getting his money’s worth.

“How unfortunate to put the city in a position to be used like this.”

I wonder what the spiff for the city was when Shellie Obama came to town?

Am I the only one disturbed by how few people see this as free speech?

I would think that the city ordinance regulating political speech on private property as an “election sign” (which looks to the content, too, to decide if the ordinance applies) probably is unconstitutional, “narrowly construed” or not. But this is jolly. Kudos to the city attorney.

Political speech is especially protected. This clearly is an attempt to stifle free speech and any statute or ordinance that tries would be unconstitutional as a prior restraint, if you ask me.

Next up should be the million sign march: Oust Obama 2012

I’d love to see a dozen or so on Long Island.

There are some open billboards in Chicago….I’ll bet they could scare up a few in Hyde Park!

I’m not sure what the issue is. In the 2004 election, rural areas with property owners that had property abutting a highway line filled the areas next to the highway with Bush signs. Ditto with McCain, though somewhat less so.

Rick Santorum’s campaign tweeted a picture of Santorum fiddling with an Etch-A-Sketch, saying he was studying Romney’s policy positions.

This Etch-A-Sketch thing could really have legs.

Hey, investor guy, I’ll help you put up a few of those signs in Minnesota. Right next to the “Miss Me Yet?” sign.

Yeah, because I’m sure what the GOP 2012 candidates really want is to be associated with Bush.

The large silver building behind the sign is One Sarasota Tower. Meaning the photo was taken just north of the intersection of US 41 and the John Ringling Causeway. That pretty much marks the south end of Newtown, the historically black area of Sarasota just north of downtown.

It is also one of the main routes between Sarasota and Bradenton.

Not surprising to see a Democrat attempting to squelch free speech.

Nice to see the benefits an Obama donor received in return featured in the story. We need more of that.

Citizens who see themselves as having superior taste and intellect often try to ban political signage- mostly yard and window signs. First Amendment be damned. Since they would never decide who to vote for based on a mere yard sign, why should they have to look at the crazy neighbor’s 20 signs every two years? Considering that in my native Minnesota left wing idiots still had their Wellstone! signs up two years after his death I can see their point.

If you have $5, $10 or $20, please send it to Ted Cruz. He is up against David Dewhurst, Tx. Lt. Gov., who is independently VERY wealthy. Dewhurst, and his crony, Joe Strauss, are responsibile for killing two bills in Texas that were very important to all of us; ending Texas sanctuary cities and making it illegal for the TSA to grope passengers in a way that violates their 4th Amendment rights.

Ted Cruz is our response to Marco Rubio. A brilliant first generation American that espouses the American dream from a family that came here legally, just as Rubio does.

Any ideas who the investor is? I’d like to send him a thank you note and suggest a few locations for signs.

His name is Michael Fox (that will make the libs heads explode). Here is the info:

How about some kudos for the city attorney, who correctly interpreted the ordinance under pressure from individuals who apparently have no idea what it says. Whether the ordinance itself is an unconstitutional restriction on speech is almost a secondary issue since the sign in question patently doesn’t come within its terms. Needless to say, that’s of no significance to those who oppose the sign for other reasons.

Been thinking about Florida for this summer’s vacation, including Sarasota. This is just like a big, friendly “Welcome” sign.

Actually, I’m quite shocked with this signage, in S’sota.

Great that they MAY have awakened. ‘Cause when living in the St of Fl. MOST said, cut the damn thing off at Ocala and make it another State. BTW NOT a damn thing to do with the influx of Cubans, in fact, the Cubano’s made more livable.

Nothing wrong with the panhandle, redneck riviera and all that..

But some of us have seen both.

Also nicer (and more varied) restaurants, fishing is the same (it’s the Gulf of Mexico…), more variety entertainment options, and while growth has rendered Sarasota less conservatives, it is still solid R territory all the way down to Naples.

I think we’ll definitely experience both the panhandle as well as Sarasota.

“… it is still solid R territory all the way down to Naples.” Does that include Naples? Is Naples liberal?

Not that that would keep me from vacationing there. I just want to spend some time looking at property, too. I’d like to experience some time in my life owning a place in a conservative area. I’ve never experienced that!! I’ve always been greatly outnumbered!

How many years has it been since I was run out of Possum Holler, told never to come back? Be nice to return as royalty.

I can be a bit of a princess at times.

Holy Cow (and I mean that) Sandra is down there too?

Don’t forget to go to the site and vote:)