There’s a lot of chatter and outrage over this tweet by David Axelrod using the term “Mittzkrieg,” a play on “Blitzkrieg”: 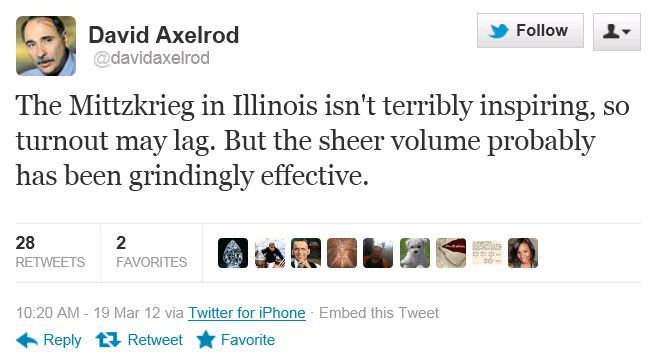 “At a time when there is so much talk about the need for civility in political discourse, it is disturbing to see President Obama’s top campaign adviser casually throw Nazi imagery around in reference to a Republican candidate for president,”  the group said in a statement. “Holocaust and Nazi imagery are always inappropriate in the political arena. Axelrod should apologize for his offensive language.”

Sorry, but I’m not digging the outrage, as it just plays into the absurd stretches of outrage by Democrats.

Let’s save the outrage for when it’s warranted, and fight back when the other side creates fauxtroversies.

Krieg is one of those terms like gate which gets combined with all sorts of other words, usually inappropriately, but with only a sterilized connotation. There are many things the Left says which any reasonable person would find objectionable. This is not one of them.

So is the term “blitz” (as in “negative media blitz”) now off-limits, too? Same word, just using the first part.

Just wondering; trying to keep up with the current the PC police diktats…….

“Sorry, but I’m not digging the outrage,”

Neither am I. We’re sanitizing the life out of language.

The better point is the incoherence in Axelrod’s statement. A “Blitzkrieg” (Or “Mittzkreig”) is lightning strike, the opposite of a “grindingly effective” siege.

There are so many more, better things about which to be outraged. This is just silly. Focus on Obama’s dangerous class warfare and inexcusable treatment of Israel. Being outraged about something silly just makes one look silly.

How is he supposed to eat?

Professor: Yes, like outrage at media activists tying an accused rapist to the Tea Party movement. We have a LOT to get toasted over, and to work on, without swooning over the latest Democratic leadership Tweet twaddle.

Agreed. Some things are just not all that important, on any level.

Of course, given how often the liberal British press uses the term “blitz” when talking about soccer matches, are they closet neo-nazis? Plus, the term itself might be German, but it’s hardly associated with Nazism. This is like claiming American Indians have been Nazis for hundreds of years because they used the swastika symbol for centuries before Nazism. (or was Hitler secretly an American Indian wannabe??? the mind boggles…). Please, these guys are throwing away their credibility with stuff like this (Or worse, playing into the other side’s game).

I’m not outraged, but I am surprised that anyone thinks an Obama flunkie would ever apologize.

No outrage here. And I agree it’s trivial for such an august body as the RJC to go after. But it doesn’t mean the peanut gallery and lowly footsoldiers can’t.

I like throwing it back in the face of the PC crowd. They don’t like it, no matter what sort of brave face they put on it.

No. Make more if you run low. Hit back. Twice as hard. Everytime.

My logical agrees to save the outrage. My “sick and tired” side makes me want to feign outrage and find bogeymen around every liberal corner just like the left does with conservatives. Perhaps if we were a wee bit better at messaging…….

Nazi imagery from an Obama adviser? How apt since Obama’s EO taking control of all resources and labor in peacetime, bypassing Congress, is eerily like Hitler’s Enabling Act.

Really … is that the best denigration you can come up with, David? You must be slipping.

You’re obviously suffering from that surfeit of overtime you put in on the Fluke matter earlier this month. You should take a few days off, knock back some Jagermeisters, and hang out will Bill Maher until you get your mojo back …

Joseph Goebbels, propaganda minister of Hitler, is quoted in Germany with the statement “… it is not for nothing that we have chosen the name National Socialist German Workers Party (NSDAP), because at heart we are Communists.”

I always get a kick out of it when liberal fascists project their own proclivities onto others.

Yeah, me too. Except when it scares the living crap out of me.

“But will the ‘Super Sharks’ have Frickin’ Lasers on their Heads?”

Yes indeed, Ragspierre, and speaking of which…

Important if true. Voter fraud and other very serious issues from 2008, and the signs that the methods are being replayed in 2012.
http://www.politijim.com/2012/03/did-obama-assassinate-clinton-delegates.html

The above is a response to this —

— not the one about sharks and lasers.

Liberals, Commies, and Nazis, oh my!

As an important election approaches, it’s good to focus on the big issues instead of getting distracted by…I don’t know…the economy, the national debt, our global standing, the emergent surveillance society, erosion of liberty, overregulation, a possible VAT, “affirmative action”, etc…

Well, some people like to be outraged and some will seize on Nazi-anything as an excuse. Sometimes it may even be warranted. But in this case …

I hate to admit it but “Mittzkrieg” is funny!

While not advocating any type of violence, I do not see a problem with beating David Axelrod about the head with a study length of kiln-dried red oak. But only until he stopped twitching, of course.

Does this make me a bad person?

Well, most “progressives” want to hang conservatives by the neck until we cheer up…

I don’t remember which Alinsky rule it is, but this is about making liberals live up to their own standards.

Well, most “progressives” want to hang conservatives by the neck until we cheer up…

You have a point, but every day the focus is not on Obama’s record is a good day for the Democrats.

Iirc the 1992 Clinton campaign had a Line of the Day that they worked to get into the media. Maybe the Obama campaign has a Distraction of the Day. As for the economy,…hey, look over there! A racist!

Considering how many foreign words have been adopted into English, we could all finding ourselves literally wordless in short order. Not that that is a bad thing in some cases…

Here is the quote:

“Only the means are different for the various socialist branches, but the principle is the same for all: the end justifies the means. Joseph Goebbels, propaganda minister of Hitler, is quoted in Germany with the statement “… it is not for nothing that we have chosen the name National Socialist German Workers Party (NSDAP), because at heart we are Communists.” Briefing his generals before the invasion of the Soviet Union in June of 1941, Hitler told them that he wanted to bring them “real socialism.” His declared intention was to destroy the Christian churches after victory.”

Looking forward to more examples of the intellectual brilliance of David Axelrod and others within the Obama machine, I note that Mitt also rhymes with spit, bit, shit, git, nit, wit, snit, twit, zit, and clit, and wonder when the fun shall continue.

Well, it looks like we can forget about the 12 year old vote.

I don’t mind this at all. I think it is indicative of a new found fighting spirit that has been absent for decades from the conservative right. The thing that troubles me most about Romney is has lack of stomach for the fight. Same with Santorum. At least with Newt we’re seeing a bit of the “Honey Badger”. He’s got a ways to go to catch up with the “Mama Grizzly” from up north though.