This driver can see Greece from his Prius

This driver can see Greece from his Prius

On Long Island, NY (Waldbaum’s parking lot, Albertson).  And on a Prius! 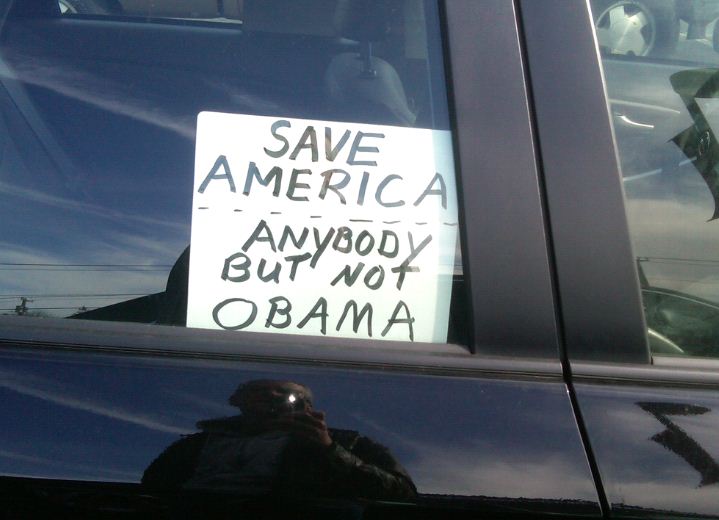 When a lib has lost the Prius vote you know he has finally hit bottom.

And it’s a homemade sign to boot! The guy must really be fed up.

In New York…so encouraging! People are fed up. But – are they fed up enough to get out and vote for ANY Republican nominee? I see so many commenting, “I won’t vote if ‘X’ is nominated!” Nonsense!! Not voting for the nominee is a vote FOR Obama.

Anybody. ANYbody. But. Obama. I can’t say it better than that home-made sign. Anybody – but NOT Obama!!

I am NOT a Romney fan; I don’t trust him, and he is a deceiver, IMHO. I don’t think Santorum is ready – he’s solid and conservative, but not ready to take on Obama one-on-one.

However, ANY of these 3 is BETTER – by orders of magnitude! – than Obama.

However, ANY of these 3 is BETTER – by orders of magnitude! – than Obama.

And I agree. But what bothers me — ANGERS me — is the fact that the GOP Establishment counts on this! They’re downright smug thinking that when Nov. 6th dawns, enough people will be so freaked out by Obama that they’ll pull the lever for “The Other Guy.”

Exactly, Kitty! They don’t care if Romney wins or not! The gravy train keeps rolling for the bankers, the Goldman Sachs-types and the connected politicians, and the MSM who either are practically criminally negligent in their ignorance, or practically criminally complicit in the lame, lame, lame fragments of information they pass along to the American viewers.

This is why people are saying they won’t vote for Romeny or Santorum.

For one thing, they are highly likely to lose to Obma.

So “ABO” fails. And the TEA Party energy, and the OWS energy, just builds and makes people feel there is no solution but rebellion.

But also, Kitty and DINORightMarie, if one of them were to win, and this is really, really important — then what? — what do you have?

They don’t have a plan for getting back to the Constitution. They nay SAY some of the right words, but they don’t know HOW.

Even Bush, who was measurably more prepared to be president, was a miserable failure at rolling back the destructions of the Left. And arguably, because he was inarticulate and practically criminally SILENT about what America means, he opened the door to Obama. (And that goes double for Karl Rove, the big ole architect of fail, and I do not listen to him on good ole Fox news. What a bunch of Epic Fail. Thanks for nothing.)

oh, oh, oh. looks like Newt might be about to start speeking at the California GOP convention. Live streamed (!) here at around 2:00 pm cntral 2/25/12 http://cagop.org/live/

I’m one of those bad guys who will not vote if Romney is the nominee. Count me OUT as someone who can be counted on to cave to extortion, who will get in line like a good little sheepie. Isn’t being a “team player” what Santorum was criticized for after the last debate.

(Aside from which, eight years of Romney followed by a Democrat would be worse than four more years of Obama followed by Palin.)

There you go, absolutely. I understand the sentiment that failure to vote for the GOP nominee is a vote for Obama, but I’ll be damned if I’ll forfeit my autonomy to vote as I please.

Though these folks would attempt to castigate and shame me into the same declarations – in February! – I would never impose on their autonomy to vote as they see fit. However, I would ask them to at least shut the hell up about it, and quit broadcasting to the GOP establishment/Romney machine that they can do whatever they like to sabotage good GOP candidates because the base will vote GOP no matter what.

Every time someone says, “I don’t like Romney, but I’ll vote for him in November,” a GOP establishment angel gets its wings.

You notice the RINOs never voluntarily say they’ll support any of our guys.

No way will I vote for, as Commander in Chief, a brazen habitual liar, a draft dodger, a potential apologist for Islamofascism (just another “religion” to which we must be sensitive), or a guy whose career “in the private sector” is most accurately described as knowing how to lay staggering amounts of unproductive debt on companies.

Sometimes I feel like the RNC may actually be trying to throw the election (to 0 ). It isn’t like our guys are having any big public fits re the bs the dems are pushing in Congress. They’re capitulating again & again.
Do we just feel so powerless that all we can do is complain to one another & cast our vote by default?

Enabler: : one that enables another to achieve an end; especially : one who enables another to persist in self-destructive behavior (as substance abuse) by providing excuses or by making it possible to avoid the consequences of such behavior

And here’s a checklist
http://www.livestrong.com/article/14675-enabling-personality/

There isn’t a “choice” between 0 and Mittens. The end result is the same thing.

Internet English should not be put on signs on cars.

this is what I am wondering, it sounds as if hes ridiculing the ABO slogan.

On a roll on the post titles lately, aren’t we, Professor?

I have found my calling.