There is no social media dance floor

There is no social media dance floor

WaPo is pushing the girl power theme, asserting that the ladies are taking over the social media dance floor:

Are social media sites destined to always be the online equivalent of a seventh-grade dance? Men on one side, women on the other?

The numbers suggest that, instead, women will soon overrun the dance floor of social media sites — and what’s more, be the DJs, too.

Since 2008, according to the Pew Research Center’s Internet and American Life Project’s Kathryn Zickuhr, women have led men in the use of social media sites. Women not only outnumber men on the sites (69 percent of women use social media, compared with 60 percent of men), they also spend more time on them. Women use social media sites to be, well, social, whereas, Zickuhr says, men are more task-oriented, using the sites to promote themselves and gather information.

I’m not buying the framework, which is a zero sum game.

There is no social media dance floor.  It’s more like a bunch of isolated dance floors which have their own character and audience.

I have no idea if these demographics of Legal Insurrection readers are accurate, but if true, you look pretty much like me demographically: 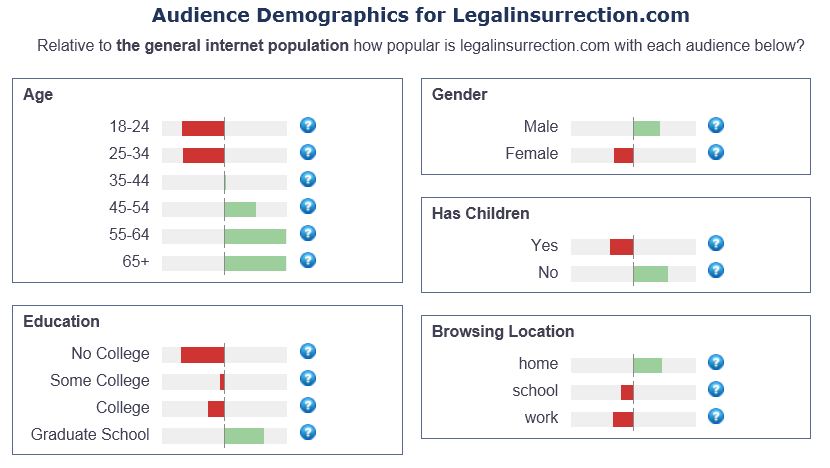 If women use Facebook more (I believe that), what do I care?  Mommy Bloggers, be they the “I love my kids, aren’t they special?” or “I hate my life” types, don’t get in my way.

I’ve even come to accept the existence of cat bloggers, although I question the social utility.

They are not depriving me of my space.  I’m mostly not even aware they exist.

No man is an island? Maybe, but this blog is.

Alexa statistics are wildly inaccurate because they are only a reflection of the population that has the Alexa toolbar, not the general population. http://paulstamatiou.com/why-you-should-completely-ignore-alexa-stats

You’re right that this information (if that’s what it is) has no meaning. My wife uses facebook to chat with her friends. I don’t. We’re different people, with different priorities and needs. So what?

Your DaleyGator Wild, Wacky, Funny, Sexy and Truly Compelling Link-A-Round! Updated through the weekend « The Daley Gator | February 26, 2012 at 12:22 pm

[…] Legal Insurrection: There no dancing in Social Media! […]

Perhaps this report indicates that women prefer non-physical contacts and men physical ones.

Perhaps this report indicates that social sciences are functionally meaningless in that the ultimate goal is to prove that their meaningless profession does indeed have value.

The day the Professor caters to a specific demographic, and tailors his posts to attract a chosen readership is the day I move on.

There’s already a “law blogger” that fits that bill.

Speak your mind a call it a day. As that continues, I will continue to be in the “I like Legal Insurrection” demographic.

This problem arose 50 years ago when teenagers took over the telephone line dance floor. All serious calls were blocked by young girls and their boy talk.

Professor, your site is my home page. I am female, in the age 35-44 bracket, of Mexican descent, BA & MA in English & American lit – no children – married – Roman Catholic. Political junkie since I was a teenager. Written for American Thinker – a novelist & screenwriter. And foremost a Newt supporter. I rarely use fb – more of a twitter fan.

I see our age group is a barely-visible blip on the on the LI demographics chart.

Perhaps not coincidentally, Google Ads sees me as someone 20-30 years older than I actually am.

I agree, with different uses by different people. The women in my extended family use FACEBOOK for tracking family members. I do not use any of them, and my warnings have got most of the women in the family to close it down as tight as they can and limit access.

What warnings? First that FACEBOOK, GOOGLE, et. al. will gather, collate, sell, publish and use any information that they gather on you by any means regardless of your wishes and their own published policies. They lie. GOOGLE voluntarily cooperated with the Chinese secret police to track political dissidents, may still be doing so, and gladly yields to any demand by any host government for any reason. That would include our own. They have been caught repeatedly.

Effective March 1, GOOGLE announced functional changes to their laughable privacy policies so that if you have any accounts with GOOGLE or any subsidiaries; they will track your browsing history on ANY account you use, even if it is not theirs, sell it, and reserve the right to publish anything you do online without your permission. Similarly, FACEBOOK is going to involuntarily switch to a “timelime” feature that makes anything you have done on FACEBOOK public, even if you deleted it long ago.

Second, what a nephew learned. He is a Marine and went through SERE [Survival, Escape, Resistance, and Evasion] school. The assumption is that you have been captured by an enemy. Part of your mission is to create and maintain a benign cover story about who you are [they have your name, rank, and serial number] and what information you could have long enough in theory [24 hours] for your unit to change anything that the enemy might get out of you now that you are captured.

Those who were on social media had their cover stories cracked in an hour or so. The bad guys always have access to the internet. Those who are seriously involved in defense, government, or politics should avoid social media like the plague, or severely restrict it to being a contact point that tells nothing about you so that it cannot be used as a portal to gather enough information to endanger you, your family, or your employer financially, politically, or socially.

I, therefore, don’t use any social media; since I already leave a fairly wide swathe online. I don’t do Twitter, because obviously I am too wordy a bugger to do so.

Don’t know anything about Alexa or his/her tool bar, but the only green lights I match there are grad school (fallen attorney) and browsing from home. Although home is where I do work computer work, so browsing from work too. I use Facebook, while my hubby does not, although some of my most active friends are men. My political commentary more often gets agreement from the men in my friends list, or my sister, who is equally conservative, but more busy with young kids. But, 54, female, law school grad, 2 kids – both over 18, and browsing from home/work. It is creepy how much the internet knows about all of us. There are more conservative male blogs, though I read a few women as well.

I don’t use facebook or much else. Mostly because I share a name with a US Senator, which on a few occasions have generated questions when I e-mail.
My wife once called the office of a former Senator in the middle of election season, and the secretary on the other end nearly lost her lunch when their “caller ID” showed my name.

Ah-so you last name is McCain.

I’ve even have come to accept the existence of cat bloggers, although I question the social utility

huh wtf happened to my avatar? changed it on wordpress and gravatar and disappeared here.

The only green bars I match are ‘male’ and ‘browses from at home’. Either I’m the total opposite of most of your readers or their statistics are crap.

This news probably only has tangential importance to anyone’s success in life. There is a benefit to social networking, people find jobs, apartment and future spouses through their social networks. Yet the observation has been made that any profession which was once dominated by men, and then taken over by women, has seen it’s financial compensation deteriorate. Will women dominating social networking have a downside for most men? While social networking was probably never that strong of a male bastion, that the proportion of women participating has increased over men is hardly surprising.

Married men tend to live longer than single men, and one of the reasons is the social networking the woman brings to the marriage.* Most married men have most of their social networks through their family and spouse. (Notice most and most before you holler about how that’s not how it is in your marriage.) Thus newly divorced guys find themselves isolated, as many of their man friends were merely husbands of their now ex-wife’s friends.

People who have studied these things note that not only do women talk more to other women than men talk to other men, but the nature of things women talk about with women is different than the things men talk to other men about. Did the study include fantasy sports leagues, and online discussions about collegiate and professional athletes? Probably not.

Don’t forget that men and women also use the internet differently. Note to liberal-socialist-progressives: The differences between men and women are far, far greater than the shape of their reproductive organs.

*There are substantial benefits to both partners in a strong and healthy marriage between a man and a woman. Don’t know about other sorts of marriages.

Women are different than men.

Women are the same as men.

I’m struck by how many are childless…if the chart is to be believed.

Not sure what that means, but I’m sure a series of federal grants will fund the science necessary to find the cause-and effect…

As the previous thousands of studies have only determined that more grant money–er…”study” is necessary.

Until the time a conclusive report is issued, I’ll subscribe to this theory:

A person that is childless is so based on circumstance and/or choice; and is unique to that individual. A childless individual is no more likely to read Legal Insurrection than one who is not.

(Somewhere, some academic is licking their chops–and now have a basis to apply for a federal grant.)

For Johanna Blakley, who researches the impact of mass media as a professor at the University of Southern California, the predominance of women on social sites could lead to a positive, although subtle, change in the way women are represented in media.
“…her belief that social media will help “dismantle some of the silly and demeaning stereotypes that we see in media and advertising about gender.”

Then in the other linked article:
Pinterest: Digital crack for women
Pinterest boards (which can never be made private), advertise only your hopes and dreams, the Stilton Gold style you aspire to, rather than the Velveeta life you live.

Yeah that’s really busting the stereotype, that many women have champagne wishes and caviar dreams on a Velveeta budget.

The article is pure tripe and reads more like an advertorial promotion of Pinterest, backed with some stupid Pew Research study intended promote progressive causes as anecdotal evidence.