According to researchers, new MRI time-lapse techniques have been developed to track the brain waves of the insane.

In the insane, there are jagged trajectories in which thoughts and processes crisscross multiple times within relatively short periods of time for no apparent reason.

Some say these self-generated impulses are a survival mechanism, much like the fight or flight reflex in animals, resulting from evolutionary development.

Others say just the opposite, pointing to the lack of such condition in some sub-species, and believe that science cannot account for such a phenomenon.

Everyone agrees the condition does not reflect an intelligent design. 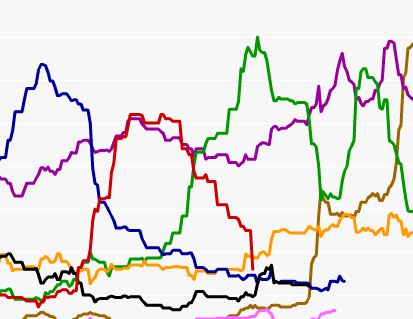 Meh. Cognitive science (including neuroscience and artificial intelligence) has been grossly exaggerating its results as long as I remember. In the late 1960s a skinnerian assured me that the challenge of creating a happy peaceful productive society was all but solved. For fifty years, an artificial intelligence has been ten years away.

IMO important progress is being made in such fields, but I don’t take the claims at face value.

Having belatedly clicked the link, I see: this post is our host’s ahem sense of humor.

Nevertheless, I stand by the foregoing.

Hang in ther Newties … Newt’s blowing them away in Georgia … getting some southern love:)

Gotta love Southerners!!!!! WOO HOO! I was born and raised in SC (live in philly now)

Newties and Newtonians, unite. WE can restore our beloved country!

Who was claiming that Intelligence was part of the Republican Party, let alone part of the primary system? 🙂
Alternatively, I could claim this is an example of Genetic selection – various individuals/ideas are being tested and many are dying out. Of course, the question is: what is the system selecting for? Fewest morals? Most amount of money? Leadership? Ability to win the Presidency?

I squinted and squinted, and never saw the funny picture…

I just know it has to be in here…somewhar…

No God. No Satan.

I often wondered…is the “study of science” scientific science?

Doood…cats are eeee-vil… Just ask them. They have to tell you when you ask them…like narcs…

All joking aside…cats really are evil. You see all those news stories about cats in retirement homes snuggling up to the next person to die…BS, that cat is just piking out whose soul its going to eat next.

Insane? Here’s David Gregory today. “I see this bumper sticker,” which, he insisted, “we’ve heard everybody talk about,” that proclaims “GM’s back on top, and Osama bin Laden is dead.”

Can’t wait for the TV ad showing B.O. driving a Volt, hanging out the window while gunning down Osama Bin Laden.

If you play it backwards does it say “Mitt is a loser?”

Heh, I voted in the polls that created that chart.

Not insane at all, in fact it was all perfectly rational: I voted each month for whomever I felt had the best chance of beating Mitt.

As you can see from the chart, about 3/4 of those polled did the same.

Insane? An ESPN announcer, whose spouse is Asian, has been suspended for referring to a chink in the armor of Jeremy Lin’s game.

It reminds me of Tom Wolfe’s graphic novel “The Man Who Always Peaked Too Soon”, about a guy who got the style trends right, but about eight years early. For example:
http://motherjones.com/photoessays/2011/10/60s-remembered/tom-wolfe-comics

But if his luck holds up, Rick Santorum may be The Man Who Peaked Just In Time.

Don’t worry … I’ve looked into the future, and not only do all these readings settle down and flatline together, the EKG for Obamacare simultaneously becomes stronger.

Let me guess. This graph represents a sample of readings from temperature sensors employed by the NWS and located in someone’s backyard. Or, perhaps, it is a chart of ABBA’s hit parade.

Actually, there is some hope for a condition that shows people prefer virtually everyone else but Romney…

Wait, I thought this was the Stupid Party. The other one is the Insane Party.

Problem is, “Insane party!” sounds like fun. How about tweaking the faux reality-based Dems by calling them The Unmoored, which has the added benefit of making them look anti-Muslim in their own semantically fevered minds?

Establishment Republicans don’t comprise so much the Stupid as Flaccid Party in need of Bob Dole’s Rx and some ecstasy.

That chart looks just like my thought process. Hmmmm….

One of the reasons I come here is because I never disagree with our host on major points and rarely on the minor. Like early commenter gs, I did not pick up on the joke initially and jumped to the conclusion this was an example of one of my pet peeves – people from one discipline mangling the product of an entirely different discipline – and was about to post a polite but incisive rebuke, beginning with the silly notion that all “insane” people are thus for apparently the same reasons, therefore to produce the same brain wave patterns. Then I noticed the absence of any reference link where usually found, and smelled something from the order rodentia.

He’s a tricky one, this professor. He’d have had everyone off Gilligan’s Island by the third episode.

Ha! Luke will be green with envy.

that explains alot w a few people I know.

Hahahahaha!!!!! I am laughing so hard right now…. literally, tears streaming down my cheeks! Pure. AWESOME.