Just not the other guy.

Here is one I think you will find different yet just as disturbing and nauseating as all the other pro-Obama stickers, Prof. It’s in San Diego. Great blog. You deserve more credit for all the work you do fighting for all the right causes. When are some of the networks going to ask for you to give analysis on some tv shows? That’s what I’m looking forward too. 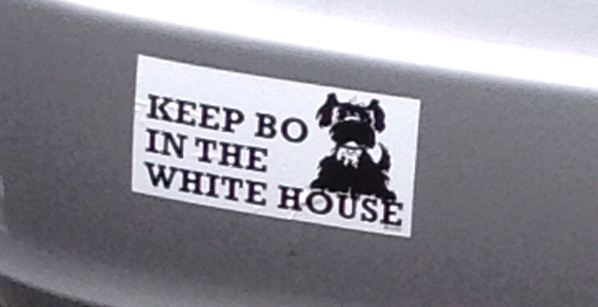 It is getting discouraging w other websites telling Gingrich to drop out and him not polling well. Can someone offer some insight on the situation…..

They know they have to try to stop him before the South starts voting. Last I heard Newt was 13 points up in Georgia and have you noticed the Newt bashers are not discussing polling numbers in the South?
Also when you start looking more deeply into these “get Newt out of the race” polls you see there is a whole lotta cheatin going on IMO. If you see it for what it is, you begin to realize how much they fear Newt in the South.

Romney’s strategy was to project early inevitablity and it failed. The guy is stuck on “30” and on hold now. Santorum’s strategy was to play to cosmetic states that weren’t being focused on because they offered few or no delegates and by winning those he got some traction but he also got Romney’s attack dogs attention.

When Newt started declaring this a three man race, it was before Santorum started winning. He had to know he wasn’t going to win those mid-western states with Santorum in the race, but he still had to slow down Romney, and Santorum did it for him but, despite the up tick in polling numbers, Rick has very little to actually show for it. Newt can also see those numbers are very fluid but they only flow in two directions between Newt and Rick. And Romney is about to try and bring Rick down. So the focus of the Rombots will be on destroying Rick, but they have to keep looking over their shoulder at Newt – hence the big push to get Newt out.

There is a lot more that I have observed, but won’t get into it.

Hang in there wodiej the whole point of what the anti-Newts are trying to do is to discourage and demoralize you, don’t play into their hands, this ain’t over yet.

thanks Say_What. i needed that too.

The way the upcoming primaries line up, nobody is going to win enough delegates for a knockout anytime soon. Even Super Tuesday doesn’t favor any particular candidate among Romney, Santorum, and Gingrich because of their respective perceived strengths: Romney (business), Santorum (social conservatism plus some legislative experience), Gingrich (legislative experience plus some social conservatism). These differences will keep the delegates apportioned fairly evenly.

Suffice it to say, it has been a particularly volatile primary season, a parade of surges, collapses, and near collapses, and this ought to be a source of hope for any candidate currently on the down side (Gingrich). There is a tortoise and hare aspect to it, and both Santorum and Gingrich have enjoyed the benefits of faithful perseverance, hanging on as the storms and sunny days come and go.

The Romney camp has severely (intended) depressed voter turnout and enthusiasm with its scorched earth approach to campaigning and we can be sure the GOP establishment which has supported him is cautioning him on this behind the scenes. It would seem that Santorum, who has just overtaken Romney in polling nationally and in many critical states, is about to receive the Romney scorched earth treatment, but there is great risk in that, as even many Romney supporters are uneasy with the tactic, especially since it involves so much flat out lying and deceit. The candidate who campaigns thusly forfeits the ability in the general to denigrate the Obama campaign for the same tactics, at which they are also experts. Romney already forfeits the Obamacare issue and other, lesser issues.

Gingrich needs to keep running, raise money, stay positive, and attack, only with factual, on-point rebuttals. He needs to avoid the media push of social issues and faux controversies, which is part of the left’s plan to draw attention away from the issues that matter and that hurt the Obama campaign: jobs, spending, taxes, regulations, economy, etc., and Obama’s record in addressing, indeed, in worsening these issues.

Santorum may well fall prey to a Romney onslaught of negative ads by the tens of millions of dollars. He may do or say something that causes his own fall. The Romney, Gingrich, or Paul campaigns may be sitting on some oppo research that gravely hurts Santorum, holding it in reserve against the time Santorum moves ahead, which is now. So many variables in any primary season, but this one in particular.

If he stays consistent, finds more campaign money, doesn’t implode, and isn’t character assassinated by Romney or media, Santorum can win the nomination. If he stumbles, Gingrich is still right there as the non-Romney guy (assuming HE doesn’t yada yada yada).

It is clear Romney cannot move past the floating 25-35% of GOP support nationally and relies on gross negativity and vast amounts of campaign funds to achieve even that. His campaign methodology depresses voter turnout and strangles GOP enthusiasm. Rather than raise himself, he is forced to beat down all others – not the prescription for ultimate victory at any level.

I suspect that if either Gingrich or Santorum could be completely knocked out of the race, it would have happened already. America has had ample opportunity to coalesce around Romney and end the nomination race and has rejected that opportunity – Romney is beginning to sink. Only more of the same negativity could save him, and it is already turning counterproductive for him. Like in 2008, it’s February and Romney has essentially shot his wad and come up short again.

This is a two-man race – Santorum or Gingrich. Both know how to run the long, slow, faithful game. Forced to it, I’d put the odds as of today at 3:2 (60/40) Santorum, but the volatility of this particular primary season make that assessment as worthless as the polling has proved.

Whether one favors Gingrich or Santorum, now is the time to make a campaign contribution if you want Romney out of there quicker.

Yeah, I agree, but I just asked you how you liked the dog.

That sticker illustrates the common delusion that we voters have a personal bond with our politicians: a delusion which politicians are eager to foster.

True, we may have some idea of what kind of individual a pol is, but that impression is far less reliable than we’d like to think it is. One word: Camelot.

Sorry BO can’t support you, I’m voting for a terrier.

That looks more like Barney than it does Bo!

Why keep Bo in the White House? Why not strap him to the top of the car and give him a tour of the eastern seabord?