More news about the drop in the labor participation rate, via Zero Hedge (emphasis in original):

A month ago, we joked when we said that for Obama to get the unemployment rate to negative by election time, all he has to do is to crush the labor force participation rate to about 55%. Looks like the good folks at the BLS heard us: it appears that the people not in the labor force exploded by an unprecedented record 1.2 million. No, that’s not a typo: 1.2 million people dropped out of the labor force in one month! So as the labor force increased from 153.9 million to 154.4 million, the non institutional population increased by 242.3 million meaning, those not in the labor force surged from 86.7 million to 87.9 million. Which means that the civilian labor force tumbled to a fresh 30 year low of 63.7% as the BLS is seriously planning on eliminating nearly half of the available labor pool from the unemployment calculation. 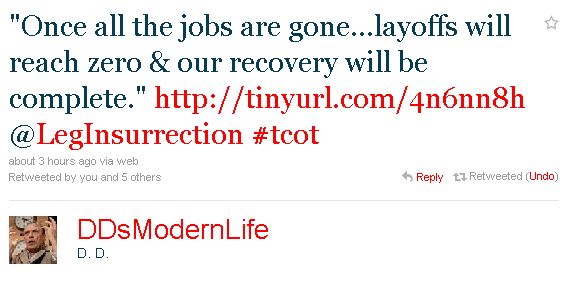 Minnesota must be safe from any financial worries in this scenario you’ve created!

The reason why? Well, because in Minnesota, our astute governor has found the way to resolve all such state government financial problems: Tax the rich!

Unemployment rate is 23% when you do the calculations using methods which were previously standard for government unemployment figures. Changes starting with the Clinton administration have artificially lowered the unemployment rate for political purposes.

The popularly reported BLS numbers are certainly misleading for a variety of reasons, but stating that 1.2M dropped out is just as misleading, since there’s no reason to assume there were just large influxes of new members to the base population that have never been in the labor force population.

With retirement accounts down though more people are stalling retirement, and staying in the workforce.
Plus a drop due to retirement is still not always a neutral (or good) thing. I know lots of firms pushing people into buyouts for early retirement to shrink numbers. Those who take it will likely have to scale back consumption, resulting in a slowing of economic growth (if it occurs on a large enough scale).

The numbers in Jan/Feb, I hardly ever listen to, the real trouble for the administration is going to be May-July when most students enter the workforce. I haven’t seen actual figures in a while, but that could be hundreds of thousands of students suddenly changing status from “not in workforce” to “unemployed.”

I absolutely agree, the numbers reported in the press are extremely misleading, and the situation is much worse than they let on, particularly considering the hardship even those who retired when planned are going through. My point is simply Zero Hedge is being inaccurate in calling the 1.2M difference a “drop out”.

What do people do when they’ve exhausted their unemployment and they just can not find any work? This is not a rhetorical question; I’d really like to know.

Kitty: What Ive seen and read about as a possible solution is perhaps self employment. Sure..that avenue sounds frightening to some but consider it. Read around about trends in consulting for instance. Maybe take an inventory of particular skills you may have and begin thinking of different ways to put those skills to work in a different setting.
One of the coolest articles I read sometime ago was written by (I believe) a new to America guy in Chicago. Couldnt find work and thought…what can I do? What does Chicago need? Clean windows. A business was born. The story goes on and he is now working 50+ hour weeks and earning something like 80K for his trouble.
As far as Im concerned? That can happen to anyone in the US. Just takes some guts…some vision and effort.
Good luck and never give up. Better days ahead.

Just so. A very long time ago the local government agency I was working for got cut from the budget and a large number of similarly credentialed people were dumped into a local private sector that could not absorb them. After a year of failing to find a decent job and living off savings, I bit the bullet and went out and basically bought myself a job – I bought the Roly Poly Rolled Sandwiches franchise I used to eat lunch at when I was working. Profits from that founded my first agency in my field and the rest is history. I’ve worked hard and had some luck, too.

Some rely on family, perhaps too long. Some have to change fields, retrain. Others have to move to where the jobs are. I know a guy who successfully exaggerated a minor disability into monthly checks for life.

Hey, but wait. henry Hawkins, yours sounds like a success story we can all hope to emulate. Not sandwiches, maybe, but in our own area.

the guy who turned a minor disability into a check every month — is he an entrepreneur? Or are you saying he’s taking advantage of the disability system?

I “liked” you comment before I had quite understood the last sentence, and if the guy is cheating, I can’t “like” that.

I hope you don’t think that’s my situation because it isn’t. When I read how more and more people have dropped out of the work force and have exhausted all options, I wonder what do they do? Where do they live, especially with a family? I suppose some live in their cars.

No, I didn’t think that. In many cases, it’s a married couple, and only one cannot replace a lost job. They’d have to downscale expenses, of course, perhaps sell the house (for too little) before getting too far behind on payments. I know of two young couples, one with a baby, the other with two kids under five, who had to move in with one of their parents (((shudder))). Worst case scenario would be living in a car, shelter, street, etc. I know a number of people who are streamlining bills, eliminating extra vehicles, cable, club/gym memberships, etc.

What Zero suggests is accurate. For folks that arent schooled in Economic data, what they are suggesting is something similar to the weekly new claims and the creative seasonal adjustment scheme….only its called something else. Or more to the point? Want to make the number of “poor” in America seem larger? Thats easy…redefine “Poor” to inlude near poor.
And of course media will go along as willing participants to amplify headlines that benefit Obama.

Under Obama, the United States has suffered the steepest drop in private investment since data were kept, as well as the slowest recovery.

Employment cannot improve much under these conditions. Can. NOT.

Obama said he had a message for Congress–pass the payroll tax cut and unemployment insurance extension without “drama” or delay. “Do not slow down the recovery we’re on now. Don’t muck it up,” he said.

The frog is still in the pot, and is looking pretty content.

Judging from Obama’s approval rating, I wouldn’t say it’s content, but it is about time for it jump if it is going to save itself.

Now the cheerleaders will state that this is a common thing in January, and indeed it is. But the correct adjustment is to look at the population increase and subtract that back off as well. In other words, we take the loss of employment and add the population growth. When we do this we get a whopping 2.422 million in the wrong direction which was bested only by the -2.618 million in January of 2009 through the process of this downturn!

In fact other than January 2009 there has never been a single month in my table, which dates back to 1999, that put up a worse combined number. This “performance” rates a literal “second from utter despair and disaster”….

This is not a strong report folks, and in fact documents an actual and ongoing collapse in the US labor force, despite the crooning on the mainstream media disinformation channels!”

Don’t say we didn’t see this coming …
3 Feb. 2012
… the people not in the labor force exploded by an unprecedented record 1.2 million. Which means that the civilian labor force tumbled to a fresh 30 year low of 63.7%

Ironically, we will know when the recovery starts, because the unemployment rate will first go up as those out of the labor force try to return.

Expect the lies, twisting, turning and other non-factual information to be generated by the democrats. This is only the beginning in a mudslinging slugfest which will soil all of us.

The democrats are experts at this game playing. The Republicans, not so much…

Devastating news. 2 years ago today my job at Wells Fargo was moved out of state along w our entire department and thousands more like it across the country from said company. I have applied for over 500 jobs and had maybe 20 interviews. A few weeks ago I got an interview where 400 other resumes were received. I have a Bachelors degree and 20 years of experience. Things are NOT getting better. I mow lawns, landscape and paint houses to make ends meet.

A good friend who works at a big company where I used to work said they need workers but won’t hire because of the volatility of the economy and uncertainty. Not looking good for this year.

1. Has anyone confirmed the Zero Hedge claims via a primary source? Although the ZH bottom chart is ascribed to Bloomberg, I couldn’t locate hyperlinks.

2. I looked at ZH’s labor force participation rate. The best corroboration I found is the Bloomberg interactive chart here. It looks like the participation rate dropped to Zero Hedge’s 63.7% by 1 January 2012, i.e. in December 2011. According to the news from early January:

U.S. stocks finished mixed to lower on Friday as investors brushed off stronger-than-expected jobs figures and sold their equities for profits.

Did the market shrug off the December jobs report because of the plunge in participation rate? If so, why is it up strongly after today’s January report? (Obama’s Intrade reelection odds have also risen.) Bloomberg quotes the government’s employment summary:

After accounting for the annual adjustments to the population controls, the employment-population ratio (58.5 percent) rose in January, while the civilian labor force participation rate held at 63.7 percent.

(Boldface mine.) The factor, i.e the decline in participation rate, which, arguably, caused the market to shrug off the apparently positive December report is not present in the January report.

3. I do not rule out gummint hanky-panky with election-year statistics, but, absent something I’ve overlooked, the post by Zero Hedge’s “Tyler Durden” is not credible.

The civilian labor force participation rate peaked at 67.33% in Feb of 2000, while the employment-population ration peaked at 64.74% in Apr of 2000. Both have been steadily trending down since then. The labor force participation rate hovered just under 60% from 1948 until Jun of 1969 when it crossed over 60% eventually climbing to the 64.74% peak in Apr of 2000. I am wondering if it is merely returning to historic levels.

Interesting. Conjecture: the increase in participation rate might be due to women; the noncyclical part of the recent decrease, to globalization and outsourcing.

Ive harped about this before and Ill illustrate again my frustration with seasonal adjustments. And recognize..Id be thrilled to see this sort of thing slow way down

So we know 400,000 is that magic number…were treading water at that rate and we want improvement from that idle benchmark.

When Ill be convinced things are really recovering is when we return to a more normal low 300,000 with some 275,000 weeks mixed in.

“Your jobs are belong to us!”

America won’t be fooled by these phony numbers.

America won’t be fooled by 8.3% unemployment number, that is.

Here is more on the aforementioned “annual adjustments to the population controls”.

I see Andy McCarthy is curious as well…about the numbers

I have to look at graphs — lots of graphs — and the definitions to work it out.