I’ll try to remember to ask.

Another one from reader Rick, who took this photo in Ithaca (at a stop light, of course) and writes:

This one is non-political, but hilarious. If you don’t get it, please ask me. 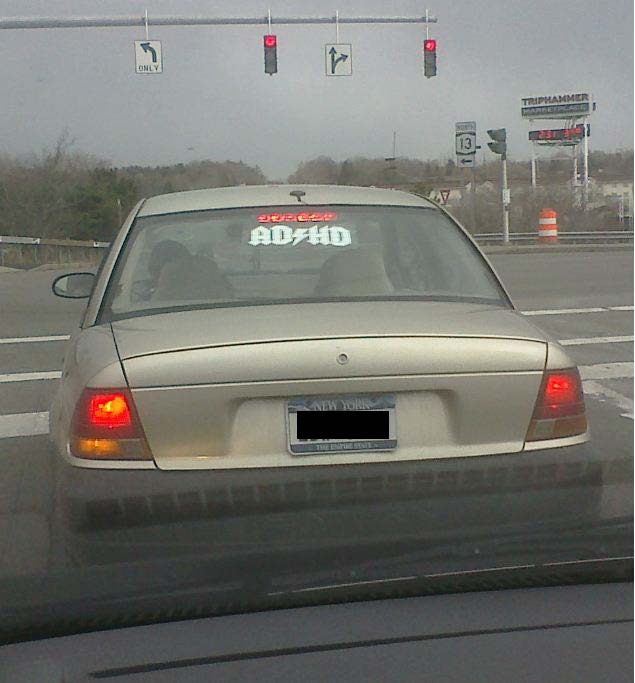 For those about to .. uhm

I frequently drive behind (no for long) a lot of folks that should have a ‘warning sign’ like this on the rear of their vehicle.
.

I do not get it either.

Is the driver on the Highway to Hell?

The word in red and yellow is difficult to decipher because it is blurry due to insufficient pixels, but I think it is “OPPOSE”. The AD/HD is Attention Deficit Hyperactivity Disorder (ADHD), a twist of the name of the rock group AC/DC.

ADHD is attention deficit hyperactivity disorder. Like ADD on steroids.

OT, to this thread, but…Professor, your choices of “Video of the Day” leads me to believe that not only were we born in the same year, maybe the same month, perhaps the same day…I’m starting to think that we were born at the same exact time of day:) Great taste in music!!!

Oh, I love this! More please.

I think (1) it is a sympathetic message “please recognize, support, properly treat, and oppose the scourge of ADHD”, rather than the notion of opposition/attacking against ADHD, (2) the driver who is carrying the sticker might have been fallen asleep on the wheel at the red stop light because his/her head is ever so slightly tilted to one side (may be the driver is awake and was just looking to the left side; the photographer can fill us in what happened when the light turned green).

If the driver fell asleep on the wheels at a red traffic light which has two lanes with two traffic lights facing the driver and near to a state route marker 13 ( http://mutcd.fhwa.dot.gov/services/publications/fhwaop02084/index.htm ) while carrying a sticker to “recognize, support, properly treat, and oppose the scourge of ADHD”, the dichotomy or the paradoxical situation the driver of that car put him/herself into might be the joke or the hilarious part of the picture. May be I am totally off the mark. OK, OK, I will shut up.

Secondly ACDC have been exemplary models of commerce. they managed Bon Scott’s death so masterfully that some fans have not realised he is dead yet. The replacement guy has been cruising the gig for 30 years.

He was introduced on “Top Gear Uk ” as someone who had sold 50 million records /cds etc but Jeremy challenged the audience to recognise him.

ACDC are way masters of subtlety .