Breaking News — two Supreme Court Justices who voted against the Citizens United decision now believe the decision should be reconsidered.

It is headline worthy at WaPo: 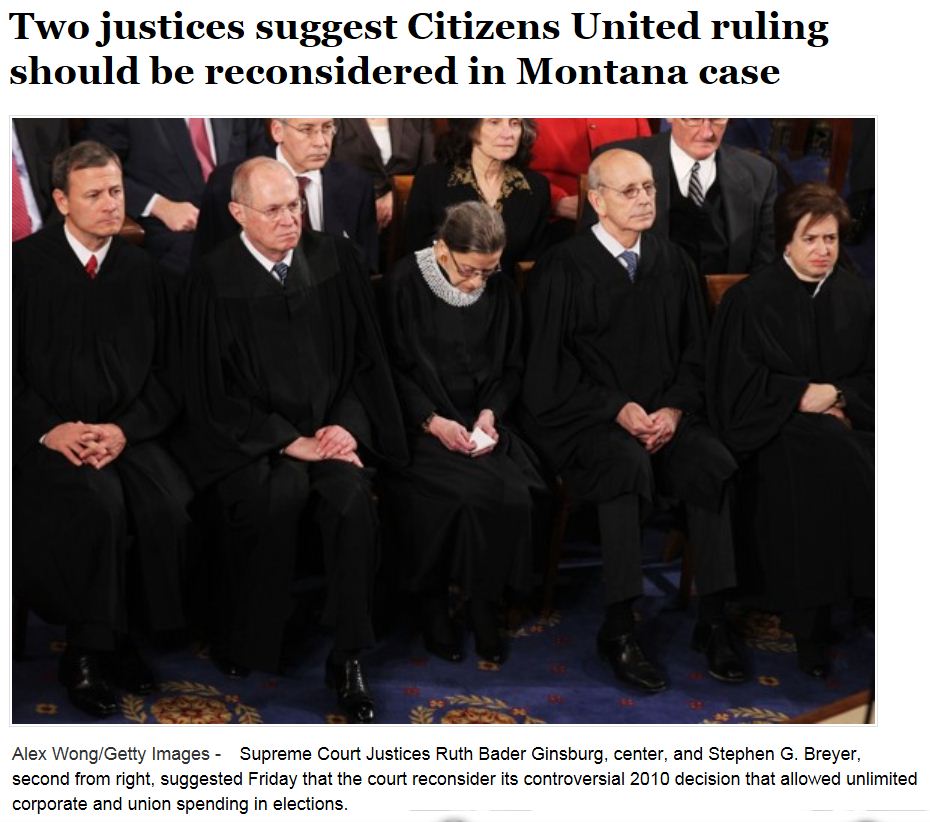 In other news, Water is Wet!

Always something that applies only to Collectivist-approved precedent.

May the health of Thomas, Scalia, Roberts, Alito, and Kennedy remain good for the foreseeable future. God forbid Obama wins and one of these justices dies or retires while he is still in charge.

Yea, they want their unfair advantage back, otherwise the Democrats might not be able to out raise us in campaign spending.

Water is wet indeed. If two of the justices who had concurred with the decision had “suggested” this, then I would say the WaPo has a story.

In other news, Chief Justice Earl Warren spoke from the grave saying, “I still support my decision in Brown v. Board of Education!”

I am also so (read: SOOOOO) glad we do not have to deal with political activism in relation to the highest court in the land.

I mean, two justices subjectively speaking out (for nooooo apparent reason) on a campaign finance decision in the middle of campaign finance season would just be transparent and ham-handedly manipulative. So glad we hold ourselves to a higher standard up there and keep our opinions out of the national narrative!

Isn’t Obama running his campaign the same way – do over.

Of course, the WaPo left out the story about the concurring judges who said the decision should not be reconsidered.

Justice Ruth Bader Ginsburg, joined by Justice Stephen G. Breyer, also supported the delay, but said that the case “will give the Court an opportunity to consider whether, in light of the huge sums currently deployed to buy candidates’ allegiance, Citizens United [v. Federal Election Commission] should continue to hold sway.”

Ms Ginsburg and Mr Breyer, does this mean we should reconsider Roe v Wade in the light of the millions of abortions that have occurred since that abortion of constitutional law? Are is some kind of consistency too much to expect from typical left wing hypocrites like yourselves?

1. This is a foreataste of what to expect if the Left gets a SCOTUS majority.

2. But don’t even think about reversing Roe v. Wade, you right-wing anti-woman bigots! /

(3. OT: Actually, I’m on neither side in the abortion wars. IMO each state should regulate (including banning if so decided) abortion within its borders.)

The Montana court acknowledged the conflict with Citizens United, but Chief Justice Mike McGrath said the state was especially vulnerable to “continued efforts of corporate control to the detriment of democracy and the republican form of government.”

I hadn’t realized that a state can ignore the federal courts if it decides a federal decision is “to the detriment of democracy and the republican form of government.”

So I’m waiting for the principled Chief Justice McGrath—he is of course principled, for not only is he a lawyer, but a Democrat—to affirm state/local jurisdiction over things like school prayer.

3. The dissenters’ call for reconsideration reminds me of the Y2K Gore campaign in FL: keep recounting till you get a favorable result, then stop—and stare decisis thereafter.

I must be one of the few conservatives out there who believes Citizens United is an absolutely terrible SC decision.

You have a point. I don’t know anyone that likes it or thinks it’s a perfect decision but it did level the playing field and corrections to it will not require a SC decision but, rather, Congressional legislation.

I know one thing is certain, I would not want to face this next general election without it.

It is competing interests (e.g. individuals, corporations, unions, government) that keep the honest people honest and others from running amuck. There was no legitimate reason to distinguish between cooperatives. They all diminish the value of our vote, and yet they, and the influence they exhibit, are entirely unavoidable.

Not to mention other special interests, including foreign sovereigns and other foreign interests. It is at least in the best interests of American citizens and our nations that domestic interests have an equal change to influence our vote.

Last year alone, our government, at the federal, state, and local levels, controlled nearly $7 trillion (approximately 1/2 of the national GDP), of which approximately $2 trillion was in accumulated debt, in order to influence the vote. I wonder if the justices considered all of the special interests who currently have free reign in our system and in reality, or perhaps they only concern themselves with their competing interests.

And the short toad Kagan glowers on the far right, not daring to speak out lest she blow her low profile over recusal on Obamacare…

[…] communicating the knowledge that people are paying attention back to those enemies of liberty.via Legal InsurrectionCategory: Legal Insurrection, Supreme CourtComments /*JERRY WILSON: Well, At Least We've Moved Past […]