The “finest example”? Them’s some mighty big shoes to fill, but this might just do it.

Thanks for this now-classic from reader JanT, who writes:

You’re doing a great job with the blog, sir, and I especially like your commentary, not to mention the fun bumper sticker meme.

In that vein, I have a contribution to offer from Tacoma, WA (attached). It’s the finest example of fatuous, preening, liberal self-righteousness that I’ve seen in many a year, and that’s a high hurdle as you know. The best part is that it’s on a Toyota “Pious”, as they’re known on South Park. Hope you like it. 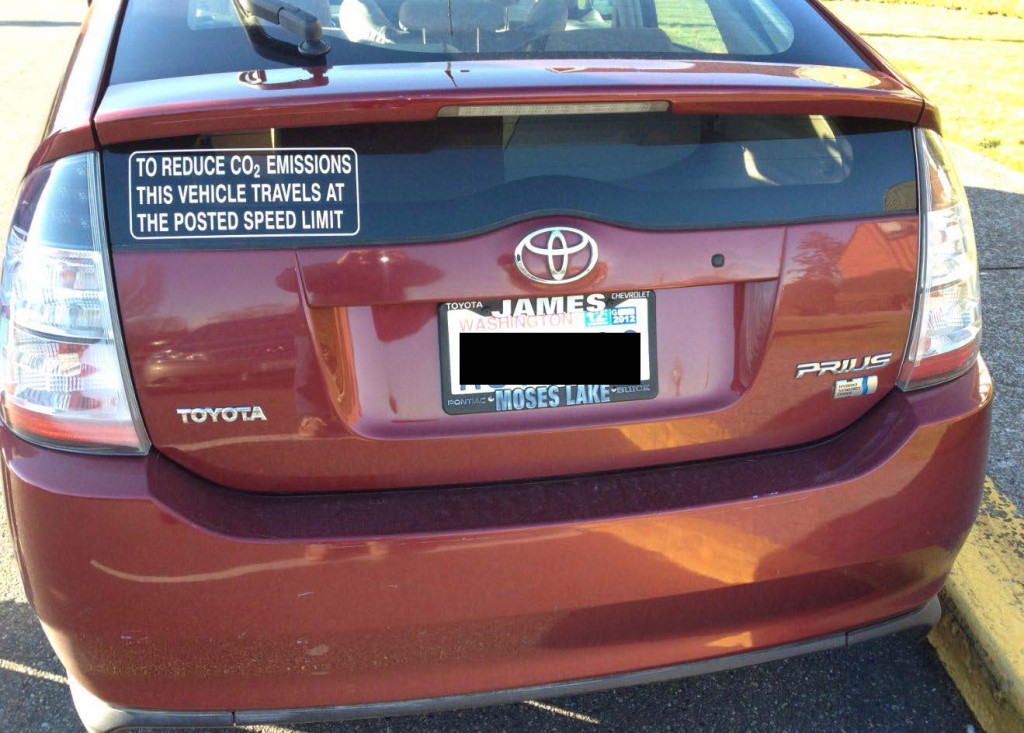 It still emits too much “SMUG”

How wretched, I bet the driver is a really ugly person.

I wish I had had my camera around the other day when I saw two stickers nearly as pretentious as the above. One (on a New Hampshire car but parked at the Washington National Cathedral) was a map of only the states which voted for Bush in 04 and it read, “They enjoyed Big Brother.” The other sticker (found at a Whole Foods, of course) proclaimed, “Smart is Back – Obama ’08” (I left the driver a note letting them know it was, “the most obnoxious bumper sticker I have ever seen.”

I believe commenting on what might be going on with any of these people would be a waste of my time at 6:45 AM. Besides, we all know what they think of us and don’t have the ethical sense to stop themselves.

More than filled the aforementioned shoes!

I guess this makes Romney anti-capitalist, too. Notice how Romney mocks the Republican view, but is sympathetic to the Democrat view.

It has been my anecdotal observation that when you encounter a snag in the normal flow of traffic on the highways of Massachusetts, it is a good bet that there is a Pious at the front of the line.

It is great fun to finally run abreast of such smugness and give them a blast of my big rig air horn and then bury them in the pungent exhaust of my Caterpillar diesel engine – made in America by Americans from steel made in American by Americans by Really Big Corporations traded on the New York Stock Exchange on WALL STREET.

Stick that up your exhaust pipe, Ms. Electric Car.

I hope the driver of this “Hybris” never has to accelerate – there could be a global melt down.

got one around here that tows a small (4 foot wide) utility trailer, tow weight probably total 500 lbs.
been a few times I have hat to hook my crown vic onto it to tow him up the hill here. think I have done it 4 times

did I mention I was also towing a 5×11 trailer weighing (with my tractor on it) ~1600 lbs a few times?
last time I told him I am not wasting my time anymore, stop driving a useless pile of crap and drive the most efficient vehicle for the job. fuel mileage is not the only measure of efficiency, people forget that.

people get on my case because I like large vehicles. my crown vic tows enough weight that I don’t need to buy a truck also. guess I am the green one huh..

I smacked into one of these last year coming onto the turnpike. She suddenly stopped right in front of me, afraid to move out of the merging lane. My SUV had almost no damage, but thank God no one was in her back seat.

I have a Summer beach cabin over on the Washington coast where we still have the freedom to drive on the beach. I have a beach Jeep with a winch and it is quite common to find people unfamiliar with sand driving stuck. I don’t mind helping out when these people get stuck.

It is my dream to one day find, at low tide, a Prius with an Obama bumper sticker, buried in the sand between the ocean and the high tide line.

So why doesn’t this tool just putt-putt along at 20mph or less, so as to emit even LESS of that horrible, eeeevil, poisonous CO2?

Better yet, put a total stop to exhaling all of that noxious gas (breath, too!) and we’ll be ever so thankful, you self-righteous, ignorant little Junior Planet-saving Cadet twit.

I’ll be impressed when I see this driver wearing a tee shirt that says:

TO REDUCE CO2 EMISSIONS I REFUSE TO DRIVE AT ALL

Better yet, s/he (well, if it’s a guy, he’s an Alan Alda type) should just stop breathing. We exhale a lot of CO2.

I’m surprised he didn’t get rear-ended.

not sure if O/T or not, few years back I ran some mpg tests on my daily driving.
this is mostly rural with a LOT of short STEEP hills.
I got best results at 70mph. enough inertia to maintain speeds on hills with light throttle and ability to pretty much just touch throttle on level. less then 1/8″ or so pressure on pedal, able to maintain torque that way.
on interstate (I95 here) 75-78 was best settings.
this 55 or speed limit crap for economy has always been fake.
and ethanol added to mix screws it all up. winter warm up times not quite doubled..really see the difference from about 5 deg F and lower on that. and driving down the road you really see the difference with radiator not blocked, crappy ethanol does not have the btu’s.

Related to eco-hypocrisy: We Had to Destroy the Fish in Order to Save Them PG&E operates the Diablo Canyon nuclear power plant, located near San Luis Obispo is due for a permit to extend its life for another twenty years of delivering electricity to California. Recently, an undersea fault line was discovered in the oceans off San Luis Obispo. In order to get a permit, PG&E must conduct a seismic survey as required by state law. Meanwhile, fishermen in the area are very concerned. Presumably, the seismic study is to ensure that the environment in the area is protected, including the fish in the bay, however, the seismic study is likely to kill many fish. Unconfirmed rumor is that fishermen are being offered serious coin to offset the loss of income if the tests are carried out.

That bumper sticker reminds me: where did I hide my RPG launcher? it is around here some where…

“I don’t brake for vehicles travelling at the posted speed limit.”

“To avoid being a municipal revenue source, this vehicle travels at the posted speed limit.”

At least that is laudable.

That sticker is actually a paraphrase.

The full version is: “To reduce your CO2 emissions, this vehicle travels at the posted speed limit. In the left lane.”

“With the blinker on.”

A study a couple of years back showed that hybrid owners tended to drive more than owners of conventional cars. They get more tickets, too.

And a lot more exciting, I will testify right here.

Do you think this guy (or any other Pious owner) goes the posted speed limit in parts of Texas where the limit is 80mph, or in all those western states where it is 75mph? And doesn’t that reduce the Pious’ efficiency?

What a simplistic review of reality, which does nothing to to further the conversation.

The posted speed limit is unlikely to correlate with optimally reduced emissions.

The best that can be said for the owner of the Prius, is that a a vehicle which is principally powered through electromotive force, can be said to derive its energy from a source with a constant or well regulated emission. However, the consideration of merit then becomes not the emissions per se, but the fuel economy of the vehicle.

Fuel economy at steady speeds with selected vehicles was studied in 2010. The most recent study indicates greater fuel efficiency at higher speeds than earlier studies; for example, some vehicles achieve better mileage at 65 mph (105 km/h) rather than at 45 mph (72 km/h)
— wikipedia.org

While each vehicle reaches its optimal fuel economy at a different speed (or range of speeds), gas mileage usually decreases rapidly at speeds above 60 mph.
— fueleconomy.gov

Other considerations must be given for variable temperature, pressure, and other environmental conditions which affect the efficiency of the combustion process. Not to mention other components (e.g. tires) whose effectiveness are similarly affected. Then there is the matter of excess loads, including: human, storage, electrical (e.g. air conditioning), etc.

Suddenly, the bumper sticker becomes a thesis and quite unwieldy.

Truly amazing. I don’t like to generalize, but there just seems to be something about American liberalism that leads to smugness. Certainly there are many unappealing personality traits which can be found in conservatives and liberals: rudeness, anger, ignorance, intolerance, hatred, etc. All of this points to individual moral character and one’s political beliefs do not necessarily lead to vice or virtue.

But honestly, I don’t think I’ve ever met a smug conservative (that is, a conservative who is smug about his socio-political beliefs; there certainly are people who are conservative who are smug about other things) Yet smugness seems to be almost an epidemic among liberals. Of course I am biased. But I noticed this contrast even when I was on the left.

Moreover, this attitude tends to spillover to individuals who are not terribly politically minded but are disproportionately exposed to liberalism. To give an example: My wife and I were having a quiet afternoon with her sister the Friday after Thanksgiving. Her sister mentioned stopping at a grocery store she doesn’t typically frequent that morning and complaining that they did not have organic coffee filters(!). My wife asked, in passing why they didn’t. Her sister’s response: “Because the people who shop there are Republicans who don’t care about the earth!”

Mind you, she said this knowing full well what our political views are.

But more importantly, this is a woman who (though quite intelligent) is largely apolitical and is happily disinterested in politics and policy. If you asked her about the IPCC, Waxman-Markey, the University of East Anglia email scandal, etc. you would likely get a blank stare. Her views on climate change are probably based on what she’s heard in the pop. culture and Al Gore’s movie (secondhand…I doubt she’s actually seen it). Moreover, she is not a smug or self-righteous person in general; she’s usually pretty down to earth and light-hearted.

However, she works for a large public university (in an administrative role), which informs much of her social and political views (such as they are). Need I say more? Indeed, she’ll even concede this; when asked why she is probably going to vote for Obama, her response was “I work at a liberal university” QED. End of story.

The smugness of the left is just contagious

The closest you can get to a smug conservative is a Libertarian (with a capital “L”), but at least they can make an argument for their smugness.

Considering it’s Washington state – filled with self-righteous citizen speed limit enforcers on our freeways – I can guarantee you – guarantee – this person drives 59 mph in the left lane on I-5.

When political positions are arrived at via emotional rather than intellectual satisfaction, a smug certainty of being right is the result.

A consistent intellect has within it a self-vetting process; emotions do not.

Yeah, but I bet there was no speed limit on the gaseous emissions from the owner that that Pious.

Anybody got an “I support coal fired electric generators.” bumper sticker?