Play hard to get

Play hard to get

Thanks to reader TonyG, who writes:

Not sure if this has been on the site before but I captured this while in traffic over here in the People’s Republic of Seattle (surprising that it hadn’t been defaced yet).

Love the blog – Thanks for all your efforts. 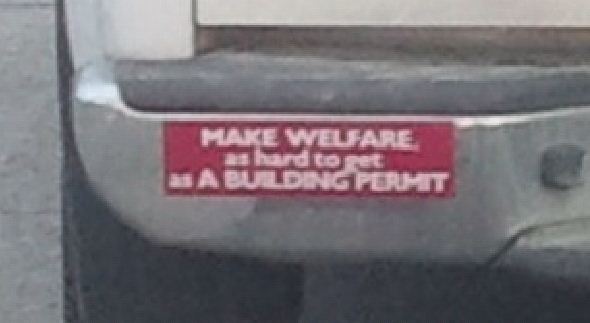 Why is it assumed it’s so much harder to get welfare than a building permit?

Do they mean the amount of time it takes or how many applications are processed and approved?

A lot of people seem convinced that cutting off welfare to the needy, reducing unemployment benefits to those out of work, cutting SSR and medicare to those unable to work is the reason for all the deficits coming from DC.

They’re only a part of the problem and unless they were eliminated completely, nibbling along the edges won’t net that much of a savings.

The Majority of our problem comes from the sheer volume of programs and projects being pushed into spending bills by our elected Representatives and Senators. That money is then given (mostly) to other Americans. To you and you and you and your neighbor down the street. But then THAT spending is GOOD spending, isn’t it, cause it’s for YOUR town or county or state. Or you don’t even know about it because the money is allocated quietly and where it goes it kept hidden.

Money given to companies like Solyndra or GM or for a bridge repair or some supposed vital improvement to the community which just happens to mostly go to the friends and associates of your state reps and county supervisors and others that helped get those in Congress elected.

Cutting the deficit shouldn’t become some kind of witch hunt that points a finger at some specific group that we think that it they’re cut off from the govt teat then everything will be just fine again. Unless it’s Congress that gets cut off it won’t do any good.

WE’RE ALL THE PROBLEM. WE’RE THE PEOPLE SENDING THE MONEY IN AND ONLY GETTING SOME OF THE MONEY BACK. We’re the ones who continue to send these thieves to DC.

Remember that while your pointing your finger at someone, 3 of your fingers are pointing back at you.

And in this case you’re the one who can do something about it.

Greed caused the housing collapse, greed caused the bailouts and so called investments. Greed and ignorance are keeping the economy from recovering and it will take some REAL austerity where everyone gets hurt to put things back on track. Frankly I don’t think it will happen. It will take more of a shock, some catastrophe for Americans and their elected members of Congress to stop the partisan bs and actually do something but the kind of shock necessary will most likely wreck the country and the Govt first.

At least we got a advance warning from the Mayans. The dinosaurs didn’t even get that.

If the Mayan’s were so smart, wouldn’t they still have a civilization? C’mon

and if I were smart, “Mayan’s” would not be possessive.

“Why is it assumed it’s so much harder to get welfare than a building permit?”

Friend, you’ve completely misconstrued the bumper sticker right out of the gate, got it backwards. The sticker implies it is too easy to qualify for welfare, that it ought to be at least as difficult as obtaining a building permit.

We need you to go back and rewrite your post and have it on the professor’s desk by noon sharp.

Why is it assumed it’s so much harder to get welfare than a building permit?

Judging by your screed, not only is it obvious you missed the message of the bumper sticker, you’ve clearly never tried to obtain a building permit.

In one case, the government worker is there to assist the applicant.

In the other case, the government workers – plural – attempt to justify their existence by thwarting the applicant.

You figure out which is which, and get back to us.

Your multiple paragraphs are a clear example of a regurgitated week’s worth of watching “cbsnbcabc”.

You may be on the wrong website, unless you are just trying to be provocative.

Calling for a Do-over.

[…] who has been through the process can identify. H/T Legal Insurrection Share/Bookmark Posted in Uncategorized […]

The Cloward Piven strategy seems pretty radical, but they were professors at Columbia U, where Obama spent some of his purple haze daze. If growing the welfare state is the goal, Obama is making all the right moves. He did say he liked his Marxist prof’s best.

This is what we get with a president that has zero executive experience. How did the most powerful position in the world get filled by a man with a job application experience reads “two years as a Saul Alinsky crisis manufacturer”?