WaPo runs this headline, FBI considered a sting aimed at Newt Gingrich in 1997, accompanied by an ominous super-close up of Gingrich: 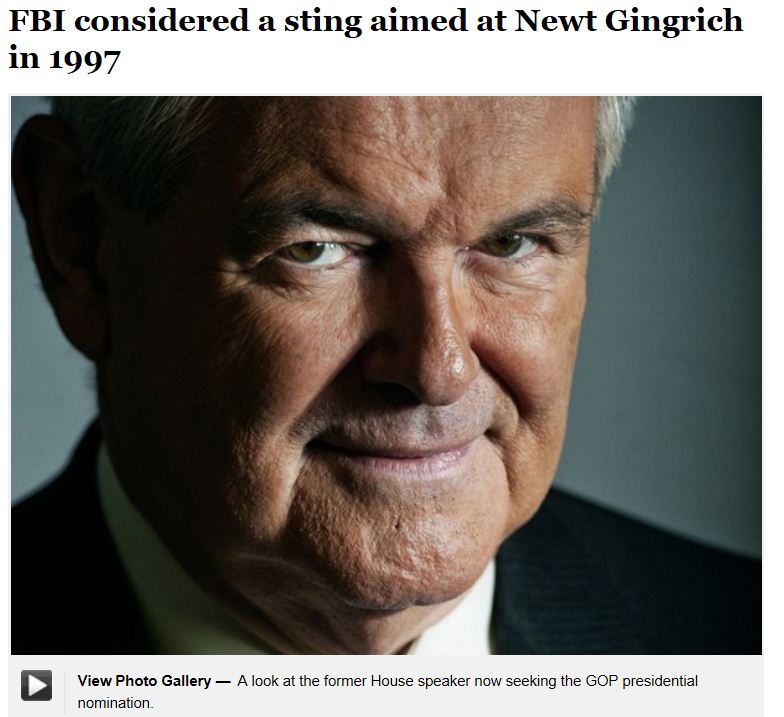 Sounds pretty bad.  Even if not charged, Newt must have been suspected of wrongdoing by the feds.  Not good for someone running for President.

But read the story, and it turns out that while the feds considered a sting, they ruled it out because there was absolutely no evidence that Newt was engaged in any wrongdoing:

It is a curious case in the annals of the FBI: The bureau considered a sting operation against then-House Speaker Newt Gingrich after sifting through allegations from a notorious arms dealer that a $10 million bribe might get Congress to lift the Iraqi arms embargo.

The FBI ended up calling off the operation in June 1997. It decided there was no evidence that Gingrich knew anything about the conversations the arms dealer was secretly recording with a man who said he was acting on behalf of Gingrich’s then-wife, Marianne, according to people with knowledge of the investigation.

So why run the headline and story?  Here’s WaPo’s explanation:

But details of the case, which became public this week in an article and documents posted online by a nonprofit journalist, show how a series of second- and third-hand conversations alleging that the top man in Congress might be for sale caught the attention of federal investigators.

At least when WaPo unfairly went after Rick Perry over the rock last summer, there actually was a rock.  Here, there was nothing at all, just second- and third-hand accusations which the FBI found to be false.

Ironically, the article concludes with a quote from an FBI agent cautioning about ruining the reputation of public figures without factual basis:

“When you’re dealing with elected officials, you have to be real careful,” he said. “Not that they can do anything to us. But their reputations are so fragile, if you don’t really, truly try to do the right thing, you could really shaft somebody.”

Yeah, you really could shaft someone.  Which is what WaPo tried to do with its headline.

WaPo has no shame, it really doesn’t.

T-10 until Jenn Rubney educates us simple folk on why being almost-kinda-not-really targeted in an FBI sting completely and utterly disqualifies Newt from the presidency.

And it is not just the Washington Post. Most of the National media and just about all of Hollywood are shoving their agendas down the throats of the American people.

The Blogosphere is about the only place left where the truth can find the light of day.

Disgusting. People get impressions. No one can read everything. Even the news hogs among us skim headlines of multiple sources.

One of Bain Capital’s consulting areas is in “Customer Strategy and Marketing”. That’s branding and promotion. Advertising. How media makes money. A total conflict of interest.

WaPo is vying for the title of worst “American” newspaper publication with the NYT, eh? Or is it with Pravda they are competing?

They are getting neck in neck, the NYT and WaPo, a photo finish.

Freedom of the press…….is there a limit, or line they can cross when they’ve gone too far?! We might just find out during this 2012 election cycle.

Oh, BTW: the NYT is replacing their CEO; not liberal enough, perhaps?! No problem with the WaPo CEO, or their columnists; they’re holding up their end with the liberal agitprop and character assassination, applying Alinsky to all not-Romney nominees equally.

Man, that is some picture of Newt. Kind of reminds me of that slow creepy grin at the end of one of Cain’s ads.

….or like the glaring leer in the Alan Grayson online ads. 😉

This innuendo has gone through the wringer. The left-wringer.

I’m not a unforgiving of WaPo.
This story was bound to come out, and sure, there was probably some better timing and wording for the piece, but it’s out there now, in need of some pumped up defanging, but it’s now not an election eve blockbuster that can’t be explained in time.

Politico did something similar with Perry yesterday. I know Cain was part of the story too, but he’s already suspended his candidacy because of the campaign against him that you documented.

We talk about this a great deal, however, I believe we should start a national movement to bring these facts out in front of the public. Many of our good people simply have no idea of the extent to which the MSM is totally corrupt.

Another example of THE BIG LIE! Make up anything and just keep repeating it! I am 63 and I truly never believed that this nation could fall so low!

Hate the media? Prof Jacobson, you ARE the media. And your calm, reassuring demeanor has thus far been a great alternative to the agitating distortions in both the main stream media and the blogosphere. Let’s find a way to ridicule and laugh at WaPo, rather than cry out like we’re somehow wounded by this feeble reporting.

“WaPo has no shame, it really doesn’t.”

Then why link them? Everybody knows how to google.

You do understand who was president and in charge of the FBI at that time? Clinton was and is notorious for getting even with his enemies. I would say Newt was a major one. Remeber the FBI files that went missing and were found in theWH. Bill O’Reilly publicly on his show made the statement he had been audited every year because Clinton didn’t like some of the things he said. And not before of since Clinton eft office. I give no credence to an orgainization that let two guys stay in prison for thirty years for a crime they didn’t commit and the FBI knew they didn’t commit so as to protect one of their own informants. And when called on this in court showed no remorse at all. I am firmly of the belief that law enforcement from the DOJ on down should be elected positions and not under the aegis of the president. As we have learned, it is a bad idea to give any one man this much power. Power corrupts and absolute power corrups absolutely.

I hate the media so much that every time I read that their stock is tumbling I rejoice. Unfortunatly, it hasn’t tumbled far enough to put them out of business. But I can only hope. The MSM is dedicated to the destruction of our country as it is. They are all communists who have banded together and have fought for years to change our way of life. They are no longr competitive but have the same agenda. By and large they are succeeding. Unless the voters wake up we will be living under the rules of Russia, China and North Korea..

American media (i.e. “the MSM”) as it is currently constituted is so thoroughly in the tank for the (Social) Democratic Party that they have a political obligation to denigrate any conservative candidate for any office. The vast majority of JournoLists are both “progressive” Liberals and knee-jerk supporters of a the entire soupcon of leftwing ideologies is a given today.

Just look at how many JournoLists descended upon Alaska when Sarah Palin was nominated as VP in 2008…50+…how many “invesitgative journolists” attempted to examine the background of Barack Obama in 2007/8? one…and he was terminated from employment by the newspaper he worked for and received death threats besides…

I’ve long since stopped watching the alphabet News media because of the overt bias against 50% of the country…nor do I read newspapers any more for the same reason. Why should I either watch or read when all they do is to insult me and claim that I’m an evil racist???? Why?