I know, yawn.  Everyone knows there is not “truth” in Pravda.

But really, how much lower can Pravda go than this article about the Ku Klux Klan which compares the Klan to the Tea Party:

Imagine a political movement created in a moment of terrible anxiety, its origins shrouded in a peculiar combination of manipulation and grass-roots mobilization, its ranks dominated by Christian conservatives and self-proclaimed patriots, its agenda driven by its members’ fervent embrace of nationalism, nativism and moral regeneration, with more than a whiff of racism wafting through it.

No, not that movement. The one from the 1920s, with the sheets and the flaming crosses and the ludicrous name meant to evoke a heroic past. The Invisible Empire of the Knights of the Ku Klux Klan, they called it. And for a few years it burned across the nation, a fearsome thing to ­behold. 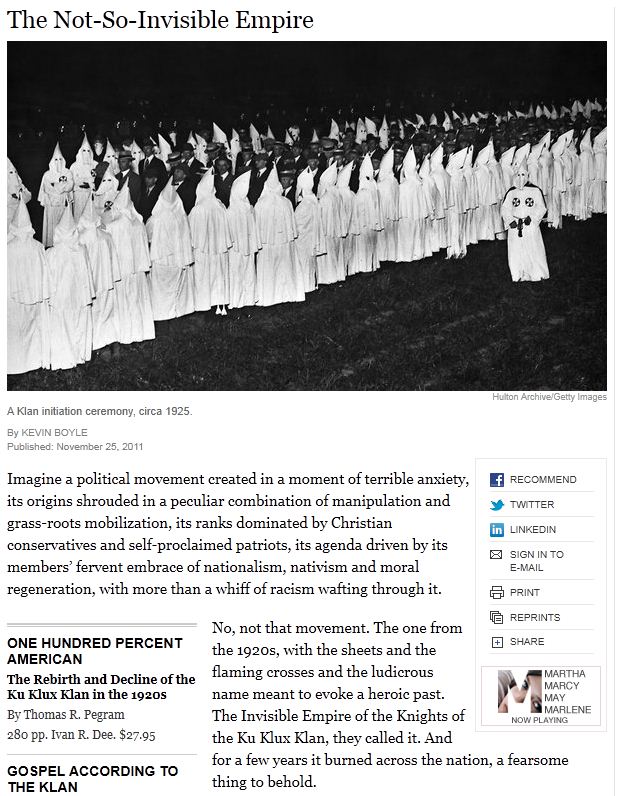 Of course it was the 1924 Democratic Party convention, held in New York, that was known as the “Klanbake.”

… and says “I need a designated driver.” Ted Kennedy speaks up…

Well, Senator Byrd was above the kleagle drinking age at the time.

What they described though could probably point to several grass roots political groups (and the Klan was originally grass roots.) They tend to come out of times of crisis, they wear the cloak of patrotism, etc. But you didn’t say what they BELIEVED which is of course the important part….

Pravda is like our MSM…they also prefer Obama in 2012. It is in their best interest that he be re-elected.

Professor, I think that article is just a reprint from the New York Times’ book review section.

The implications of Pravda parroting the NYT is understood…

Shouldn’t they be paying just a little attention to Putin’s impending dictatorship? I would think that they have enough troubles at home…

He’s referring to Pravda on the Hudson, not the original.

Oddly, the real Pravda has been publishing some really good editorials on American politics over the past few years. Never imagined I’d see the day when Pravda criticized a US administration for adopting socialist policies that are proven failures.

My favorite was one that referred to “the American Sheeple” as too clueless and distracted to notice what Obama was doing to us.

Articles like that are the reason I no longer subcribe to your “news”paper.

Apparently you’re the impression people don’t have the internet to find out what you purposely omit or deliberately mislead with.

The NYT is great about rewriting history. #1 the clan was and is democrat. A fact that eludes the NYT’s memory. #2 Republicns have fought for decades to get equal justice for blacks and other minorities. The blacks give us a kick in the teeth for that effort. They prefer the gimme gimme programs the dims put out. Probably a case of “what have you done for me lately”. #3 Neither I nor anyone else has ever heard of tea party members lynching blacks or catholics and burning crosses in the yards of mixed marriage couples. It is amazing how a so-called time honored newspaper can outright lie about a movement of concerned citizens who love their country and want to save it.

Is it just me but does anyone else notice the hysteria the NYT puts out every day in support of anyone with a smidgeon of communism. I, for one, have not forgotten how the NYT supported Stalin in the forties and fifties. They went into mourning when the USSR crumbled and have never recovered.

My great aunt’s husband back in the 1920s was a deputy sheriff in Jefferson County, Alabama. The klan shot him to death on his front porch. He died way before I was born but it affected my great aunt for the rest of her long, long life. And you know what? I have never heard of a tea party member doing anything like this. An OWS member…yeah, several times.