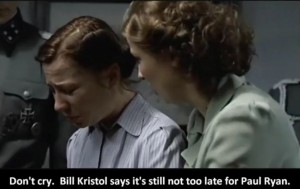 FOUR good ideas a day? Damn! I’ll vote for him!

Discarding the bad ideas is not all that difficult. All you have to do is examine them.

It appears that I will be in PA-7 (the district that looks like a dog running downhill with a christmas tree shoved up it’s butt).

“The worst kind of RINO” would be the subversive from within and is the oldest tale of betrayal. As with all people, individual dignity rules, and Jews are diversity in themselves. The other class of “diversity” is false and serves to both denigrate individual dignity and devalue human life. The former has always been a means to consolidate wealth and power at another’s expense. The “Rabbi”, ostensibly, favors negative progress, which is true to his ideological heritage, which does not exactly correspond to original “progress”. He must be a rebel with a cause and without a clue.

AGW/AGCC/”climate disruption” – an unproven hypothesis of an incompletely and, apparently, insufficiently characterized system, especially in a global context

evolution – an unprovable hypothesis due to a permanent condition of limited, circumstantial evidence, which precludes demonstrating continuity

As for individual prayer, God helps those who help themselves. As far as God is concerned, it would seem clear that our existence is a test of conscience. I don’t think God would object to an individual expressing gratitude for that opportunity.

As an alternative to God, there exists an undeniable underlying order to our universe. We are aware of at least two aspects of that order: natural (i.e. instinctive) and enlightened (i.e. conscious). When we reject one or both there follows a progressive corruption of individuals and society.

As for football, it is not a religion, it cannot be. It may be a source of obsession, but it does not derive nor depend on articles of faith. The “Rabbi’s” faith, whether it is a selective Judaism or his preferred secular occult, are religions, and quite perverted in that his principles engender the denigration of individual dignity and devaluation of human life.

Keep the faith, “Rabbi”, whichever you select at your convenience.

How fun. This is the path followed by historical cycles of creation and destruction. I wonder who will “win” this time.

Well, whoever it may be, it will certainly be advanced by individuals who maintain dreams of physical, material, and ego instant gratification, principally through redistributive and retributive change, but also through fraudulent exploitation.

Incidentally, the “Rabbi” is a perfect example of why people should not submit nor defer to mortal gods. All people are vulnerable to corruption and there is no legitimate reason to suppress individual dignity for their greater good.

Whether it is religion, cults, authoritarian ideologies, selective history, selective science, or a selective reality, history is littered with examples of individuals and cooperatives suffering from delusions of grandeur who have catastrophically exploited an authority, granted voluntarily or involuntarily, over others.

Parker was much better when she was writing for the Orlando Sentinel. When she moved to the WaPo, she got captured by the left. I guess she wasn’t getting invited to the good parties.

Yeah. That party scene seems to seduce everybody in DC to think the same.

Inevitable, Hitler hears that Gingrich is leading the GOP race…

You support Newt, but obviously not with blinders on. Such scruple may repel more readers than it attracts, but I’m happy to be one of the latter.

Yes, I have no doubt that I have turned away some readers by my support of Newt and criticism of the way in which Romney is running his campaign. I don’t care at this point. Country before blog.

Who are these NEW Hitler cast members? They are f#^*@!* hilarious

my daughter is meeting him tonight for some job advice

Still cleaning my keyboard off..

BUT, whomever IS correct re: Repubs. They knew how to win..

FWIW I would prefer commentary at the breaks. Live Event has me either reading or listening and I miss a lot.

Professor …..you may remember me asking you to send money guns and lawyers to help defend Barletta ….. well ….. never mind …..he’s good ….not my Congressman anymore * GRIN * ….but its good I get to start all over and do it again …I have to go and start to read up on my new democrat congressman and next victim

I stunned my father-in-law at dinner Sunday, who is a Romney supporter. He was wondering why so many people weren’t going for Romney, especially because conservative punditry seems to be aligning with him. Basically, I told FIL that the elite pundits should just shut up with their derision of non-Romney candidates, because most informed citizens consider their insults of grassroots-supported candidates more like high praise.