Or does Fumblama work better?

Thanks  for the photo to reader Robert who writes:

Found in Cape Coral, FL.
Stopped at light, fumbled to get.

I read every day.
Keep up the good work. 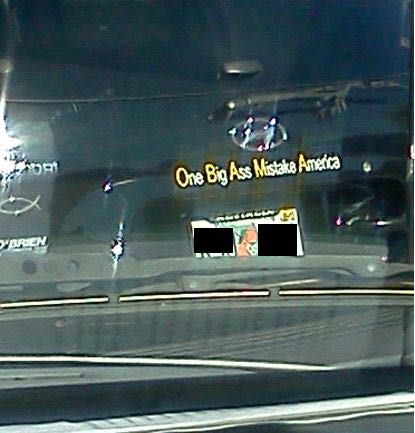 I wouldn’t be surprised. After WI, OWS, and yesterday’s Occupy Ports, these people have shown their a bit off, and violent, when they choose to act.

I really am dreading 2012 convention season. I predict 1968 on steroids for the year; in Charlotte, NC in particular. At the RNC convention in Tampa too, probably. If the leftists go the full monty (as Van Jones has said they are planning to do), it will seal the change to conservative/Republican leadership, IMHO.

However, I must say: I am looking forward to that election night when we KNOW that Obama is a 1 term president, Lord willing. I believe what Newt said is true: that night the economy, the stock market, the whole country will respond with positive optimism. Immediate turnaround.

Lord, I hope so! One Big A$$ Mistake America – outta there!

Now that is hope you can believe in!

Might’ve fumbled a bit, but it adds to the picture. In the bumper sticker series, it looks like an action shot.