Iranian TV has shown the first video footage of an advanced US drone aircraft that Tehran says it downed near the
Afghan border.

US officials have acknowledged the loss of the unmanned plane, saying it had malfunctioned.

However, Iranian officials say its forces electronically hijacked the drone and steered it to the ground.

Obama rejected plans to launch a covert operation to take back or at least destroy the drone and all its sensitive military technologies for fear it would spark a larger confrontation.  But if it is true, as the Iranians claim, that the drone did not fall by accident but was brought down by Iranian electronic means, then isn’t that already an act of war?

There are a lot of mysteries here:

The enigmas surrounding its capture continue to pile up. How did Iran know the drone had entered its airspace? How was it caused to land? Most of all, why did the craft’s self-destruct mechanism which is programmed to activate
automatically fail to work? And if it malfunctioned, why was it not activated by remote control? 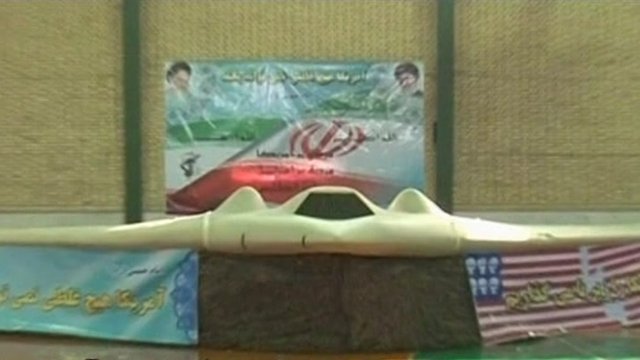 Update: The readers called it correctly, the U.S. is calling the vehicle in the photo a fake:

The aircraft shown on Iranian television today was not the American stealth drone that crashed in Iran last week, as the Iranian government claimed, but was likely just a model, U.S. officials told ABC News.

Update 12-10-2011 – Nice to see Glenn Greenwald has taken notice.  The original reports were that the drone was downed near the Afghan border and the U.S. military initially asserted it lost contact with the drone in Western Afghanistan.  That was the context of my assertion that it could be considered an “act of war,” not that it was brought down while hovering over an Iranian city.  But let’s talk about what really is going on here, I’ve repeatedly called Greenwald out for his outrageous and repeated use of the slur “Israel firsters,” his disloyalty charge against Eric Cantor, and misguided defense of the Iranian mullahs under a misconception that supporting brutal tyranny is supporting the rule of law.  Greenwald is upset that I have called him out on these topics, so he takes a single sentence of mine out of context.  So much for what passes for the intelligentsia these days.

knowing TheWon, King Obama, PBTH, he probably gave it to Iran through a program such as “stealth and furious” so then he could later argue that we should end the war on terrorism because its dong nothing more then arming the enemy…

A caller to Rush (who is a pilot) just now posited that the ChiComs jammed the electronics of the stealth drone, because they likely have the technology instead of Iran.

First, no way could it be that intact.

Next thing we know, the ChiComs will be called in to join in the review of this previously classified military technology.

Presuming the downed drone might carry a “homing device”, why don’t we just send over a fleet of drones to decimate the area within three miles of it: no covert operation necessary. Too overt for the Commander-in-Chief? Too bad.

Those living in and around Washington DC might want to investigate these links.

Is Debkafile insinuating that the loss of the drone was an inside job? Are they implicitly suggesting the military organization responsible for drone operations has been infiltrated by agents sympathetic Iran?

that is the inference I take aware from Debka

“the drone did not fall by accident but was brought down by Iranian electronic means, then isn’t that already an act of war?”

So was the takeover of the American embassy in Tehran during Obama-lite’s presidency, and he did nothing about it but whine “poor pitiful us.” What makes you think Obama will do anything different?

Because Obama identifies with drones.

no mystery.
remember earlier this year a story about the drones having security and hack issues?

well here we are….

I fly model airplanes and if that is the drone in the picture then I have to say it looks an awful lot like a styrofoam model of a stealth plane you can buy from hobbyking.com for 59 bucks….without radio gear or a motor, of course!

maybe the real drone is a twisted mass of molten metal and the Iranians have photographed a model stealth drone.

Remember the missile launches in 2008, where a photo of two launched missiles were Photoshop-enhanced to show four missiles?

I thought the same thing. It looks like a kid’s toy.

Wouldn’t you think someone would have thought to program a self-destruct capability?

they have, the issue is why it did not work.
if someone else grabbed full control…it wouldn’t.

Wouldn’t you think I would have noticed that the article included a reference to a self-destruct mechanism? Excuse my jump to comment.

They don’t put self destruct codes in drones, or missiles for that matter. If your enemy got the list of codes or cracked them somehow, it would cripple us. There are several ways to bring down the drone, HREF guns, jammers, and probably the hardest of all hacking. Unless they have something to bypass it. I have no idea. But it looks like it is in good shape so its anyone’s guess.

Video of the Drone

Wait a minute… now, I realize Iran has vowed to atomize every man, woman, and child in Israel, but that’s just standard boilerplate diplomacy in the Middle East. Are you telling me they’re dishonest too???

Are you telling me they’re dishonest too???

Of course not silly! If they were as dishonest as that, then it would be just stupid beyond compare for a President to try negotiating with them; like Obama keeps trying to do.

And since we have been told over and over and over again how “Brilliant” Obama is, Iran clearly must be good, honest folk who are merely misunderstood or portrayed incorrectly by the Zionist controlled media or something.

In fact, clearly the only logical explanation here is that Israel built this fake and left it in the desert for Iran to find and end up making themselves look foolish with. After all, everything is the Jews fault, you know…

Common they’ve been so honest about this stuff in the past:
http://defensetech.org/2010/04/19/iranian-s-300-sams-or-a-bunch-of-oil-drums-welded-together/

OMG, how dare Russia sell them such a cheap knock-off their weapons! Poor Iran, constantly taken advantage of.

And what I think I like about that the most is the fact that they have this “weapon system” they are trying to pass off as special, so they paint it camouflage as one would find on the battlefield. We’ll just ignore the fact that their camouflage choice was Maroon, SkyBlue and Tan on Green and instead focus on the fact they go and paint giant Candy-Apple Red 4′ diameter caps onto the supposed launch tubes. Then, tell me that isn’t red reflectors along the side of the truck as well! Its like a 5 year old camouflaged this damn thing for them…

Mahmoud Ahmadinejad joins the cast of the Capricorn One remake. He was understandably busy planning the embassy takeover when the first one came out.

The video does not say that the image is “the” downed drone, albeit it promotes that inference. This is a conman technique in which the liar, if caught, can profess to have been misunderstood and blame the patsy.

I think a military guy on FOX acknowledged it was the US drone. He also said we should have gone in to destroy it. Obama probably prefers leveling the “playing field”. Maybe Iran will be nicer to us if we share our toys with them?

Hopefully it’s a trojan horse with another computer virus …

I think we should turn Iran into a glass parking lot for Iraq to use.

this is like the Obama Admin telling us their “facts” behind the Bin Laden raid – they cant seem to follow one script to save their lives!

Found this webpage, with photos, via a comment on the subject at Weasel Zippers.

I’m guessing Iran has nothing but painted styrofoam.

Do you take the phrase “Israel Firsters” to be a slur when used against Americans, Israelis or whom?

Obviously, an American who is an “Israeli Firster” is a traitor and should be treated accordingly – slurs or not.

“Greenwald is upset that I have called him out on these topics, so he takes a single sentence of mine out of context. So much for what passes for the intelligentsia these days.”

So why then do you do the same to Greenwald? The fuller quote with crucial context is: “…see this casual speculation from a neocon law professor at Cornell that Iran may have committed an “act of war” if it brought down the American drone that *entered its airspace* and hovered over its soil without permission”).”

You suggest that the fact that the drone was ‘near’ the Afghan border is somehow material to your point that *might* be an act of war and that this would make your question a reasonable one. Whether the drone was ‘near’ a neighboring border or directly above Tehran, the fact is that this drone was illegally in Iranian airspace. That’s the point. From the Fox News link you provide (“it’s the real thing”), the guest also confirms that this drone was *purposefully* in Iranian airspace and was 140 miles inside the border when in it was brought down.

What is your working definition of an “act of war”, professor?