OMG, the feeling sure is catching on.

Another one from Linda and her happy hunting grounds, the Lowe’s parking lot in Nashville: 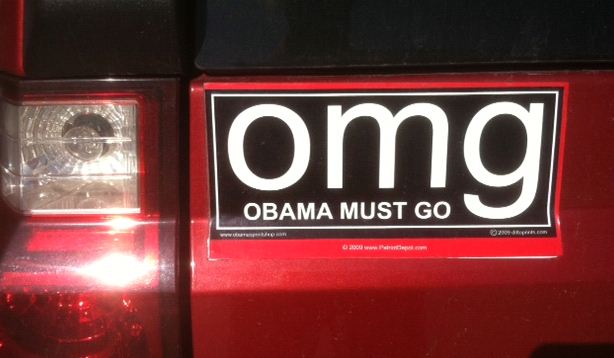 Hahaha! Couldn’t agree with you more about the ASAP, too!

Linda must have a great time looking for all these. 😉

Marie, yes, it has become quite an entertaining game to stalk unique stickers while out and about. I haven’t had any luck capturing a decent image at stop lights.

How about JAABO? Just About Anyone But Obama.

Saw one with capital letters in a bold red with the rest of the letters in black:

Who will be the worst ex-president … Jimmy Carter or Barack Obama?

Two radical critics of Israel with no fear of consequences for their terrorist-enabling pronouncements?

Say what you will about the two Bushes and Reagan … in retirement they’ve kept it very low-key.

LukeHandCool (who didn’t forget Gerald Ford … who saved Ford for the parenthetical, shameless namedropping add-on … whose uncle ran into President Ford at a pharmacy in Palm Desert and chatted with him a couple minutes … and said President Ford was as polite and kindly a gentleman as you’d ever care to meet).

Heard on Dennis Miller show (from a caller): Seen in a parking lot — bumper sticker on SUV with a pic of Obama and the text: “Does this ass make my car look big?”