Posted by William A. Jacobson Wednesday, November 2, 2011 at 07:00am 7 Comments
More Sharing Options

that Tennessee doesn’t have an income tax?

Re no State Income tax in TN, we spent two years, 2001-2, battling our Republican Gov Don Sundquist who tried to implement a State Income Tax 6 weeks after he was re-elected….we won and we are still income tax free.

Here is a picture of the Capitol during one of the protests in 2001: 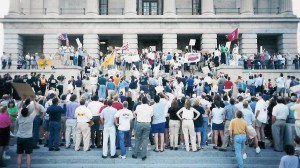 When I moved from NJ – fed up with the taxes, I presented to my wonderful wife a list of places to live:

The common denominator being no income tax. (Alaska doesn’t have it either, but that was never an option).

Following the Professor’s advice, it was time to “starve the beast” of our income at the state level.

We ended up in FL.

Sales tax is high in FL, but not higher than NJ. Property costs and property taxes are much lower. Summer air conditioning bills are higher, as is property insurance, but all-in-all we came out ahead.

My biggest concern is the influx of liberals from the North who bring their dumb voting patterns with them, and people in Florida (including the absolutely horrendous GOP establishment) who don’t see the playbook that brought down the NE being attempted in every state.

The steady growth of the state has hidden some of the problems. As growth ebbs, more hard choices will need to be made.

There is enough resistance to big government outside of the Miami-Dade area (where they love big government and the county/city are teetering on bankruptcy) that nothing will change in the near-term, but too many who take it for granted.

After experiencing NJ under Corzine, I will take nothing for granted. The fans of big government and their unthinking zombie followers are everywhere 🙂

I should add, that I was looking for zero percent on capital gains as a key driver.

NH and TN also have income tax on dividends and interest, which wasn’t important to me.

It was a true shock being a lifelong citizen of TN when we had a GOP governor pressing for a state income tax about 10yrs ago. The citizenry marched on the state capitol to oppose such a change. There were a couple of rounds of effort before the eventual defeat. The succeeding Democrat governor, Phil Bredesen, a healthcare executive & millionaire ran as a strong opponent to a state income tax. Not only did he run as a centrist…but he governed as one also. For the most part he was more conservative fiscally than practically any GOP politician within the state.

I agree PrincetonAl, we live in Texas and I have a problem with telling everyone to come on down. Before long we’ll be overtaken by liberals bringing their idiot ideologies and gimme attitude. Our states have become what they are because of it’s people – diehard independents who don’t want handouts or government interference, just leave us alone and we’ll do what is right for our state. Liberals are like locusts, they come in, destroy the environment then move on to destroy another environment. God help us get through to November 2012. We can and must destroy the socialist, progressive, liberal democrat party. They need to go back to hiding another 100 years.

As a Tennessean, I can attest to “Reader Ben” as one of the most active and staunch supporters of low taxation and reduction of Big Government. He truly does the heavy lifting.

The owner of the truck also appears to be a refugee from high income tax state California (Drew Ford in La Mesa, CA) and is just being proud of his new home!

Color me happy someone else left CA, sad it was someone with common sense. Wish it was the Dems leaving.