Another insurrectionist bumper sticker photographed by someone from Peoria, AZ.

We’ve seen this one before elsewhere, but it’s worth running again, particularly because of the photographer.

Thanks to a reader who writes:

My son spotted this one in a parking lot in Tucson, AZ a few weeks back.  I guess the fact that he gets the humor in this means his dad and I are not doing too horrible of a job raising him. He turns 16 today and is a very dedicated student and an all around great kid. 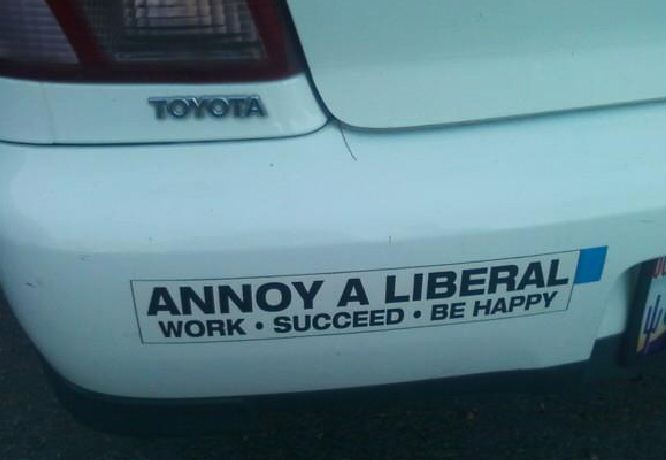 How about changing the word “liberal” to “OWSer?” Or even “Occupier?”

“I guess the fact that he gets the humor in this means his dad and I are not doing too horrible of a job raising him. He turns 16 today and is a very dedicated student and an all around great kid.”

Sounds like he’s on his way to a happy and successful life!

It’s great to teach your kids to laugh at life. Liberal kids generally take themselves much too seriously.

Here one parked at the refinery I work at.

Looks like the USW is losing it’s grip on union members.

[…] Legal Insurrection.  I really need to get one of these. Share this:TwitterFacebookEmailLike this:LikeBe the first to […]

Love it! As good as the ‘Redistribute My Work Ethic, Not My Paycheck’ sticker I’ve seen.

The Annoy motif on political bumper stickers has been around for a long while now . . . nearly two decades to my knowledge. The first one I recall was a bumper sticker associated with the reelection campaign of former President George H.W. Bush, back in 1992.

On Wednesday the 28th of October, during the last week of that campaign, Drummond Ayres, Jr. wrote an article in the NY Times, entitled, “THE 1992 CAMPAIGN: Campaign Trail; Bush Eases Hammering Of the Press,” noting that, while that particular bumper sticker was likely Bush’s favorite, the President had recently shown signs of easing off on his political sniping at the media in general, defending the “working press” such as photographers, and pointing out that it was really the “talking heads” who were the media bad actors.

The following year, 1993, former Democrat Governor Jim Florio of New Jersey was up for reelection, and an updated version of the bumper sticker reappeared. This time it was humorously aimed at Jim Goodman, a state house reporter who covered politics for The Times (of Trenton).

Goodman always leaned left, and in the opinion of many, exhibited an almost sycophantish level of attention to the promotion of Florio policies while the Governor was in office. Even some of the more liberal-leaning members amongst the working press thought the bumper sticker was funny, and prominently posted them on their office walls.

(Yes, that is a framed copy of the bumper sticker which hangs in my home office.)

My suggestions for bumper stickers;

Help a Brother Out – Of the White House

The Mayans were Optimists