Posted by William A. Jacobson Saturday, November 5, 2011 at 07:00am 5 Comments
More Sharing Options

As you know, next week is a crucial vote on Referendum No. 2 in Ohio, which needs to pass in order to put the collective bargaining reform bill into effect.  Polling does not look good.  There also is another referendum on education reform.

Thanks to a reader who is volunteering in the get out the vote effort:

We saw a number of interesting cars in the parking lot. As you may know, passing Issues 2 & 3 have national implications. The response to the phone bank calls was mixed, but the parking lot sure was interesting. The patriots were out. Anything you can do to support 2 & 3 would be appreciated. We were supported today by The Ohio Project (health care Issue 3) and Americans For Prosperity (Issue 2) but there hasn’t been much else other than a few ads. Rumor is the Republican Party is taking a back seat. 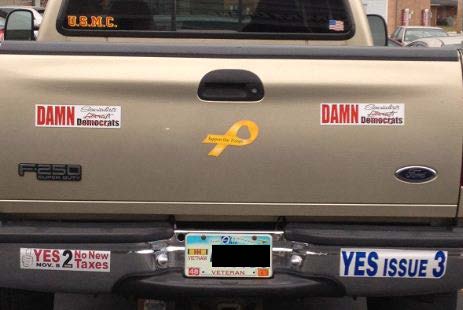 Ah, the Marines. They’re never afraid their vehicle will get keyed because of their bumper stickers. Huzzah!

This is the real battle we conservatives should be fighting. Milquetoast Romney will not take sides in this war between the middle class who are being taxed more and more at the state and local levels and the public sector unions who have been sucking at the public teat for some time. This is the fight the middle class must win or they will become extinct. If the public sector unions lose, the Democratic Party will be a shell of itself. Instead of worrying about accusations and settlements, this is the issue we must focus ourselves on. Anyone who takes a back seat on this issue, especially the GOP, should be kicked in the arse.
I highlight Romney in this because he is really the status quo GOP candidate. The same guy who figured out RomneyCare will figure out how to peacefully co-exist with the public service unions. He also believes wolverines make great pets.

“Rumor is the Republican Party is taking a back seat.”

It’s way past the rumor stage Their absence is the very reason the Republican party is being abandoned. They have no guts for anything beyond lobbying a committee in Washington.

The entire country should know as much about the campaigning and Tuesday’s vote in Ohio as it knew about the riots in Wisconsin. Republicans should have been on the Ohio referendum like white on rice for months. Conservatives fought and won a squeaker without them in Wisconsin, let’s hope they can do it again in Ohio.