Posted by William A. Jacobson Thursday, November 3, 2011 at 07:00am 16 Comments
More Sharing Options

From reader Don, who writes:

Saw this scrawled (spray-painted) on the underside of a bridge over the Trinity River, maybe 1.5 miles from the Occupy Dallas location. I stopped to safely take a picture. Star of David with “Zionist Occupied USA” …

I’ve been in Texas (Houston or Dallas) nearly 40 years, and I don’t remember seeing a single piece of “zionist” or anti-semitic-related graffiti, ever. I’ve heard of the rare vandalism attack on a synagogue or two over the years, but just general “public space” anti-semitic graffiti like this is rare to non-existent here. This is something new, and almost certainly related to the “Occupy” movement. An ill-wind…

It’s certainly possible, although referring to Zionist Occupied USA, or some variation, is a favorite slogan of neo-Nazis and White Supremacists.  Given the language we’ve seen from some elements in the Occupy Wall Street movement and the fact that the American Nazi party supports OWS, however, your instincts may be right. 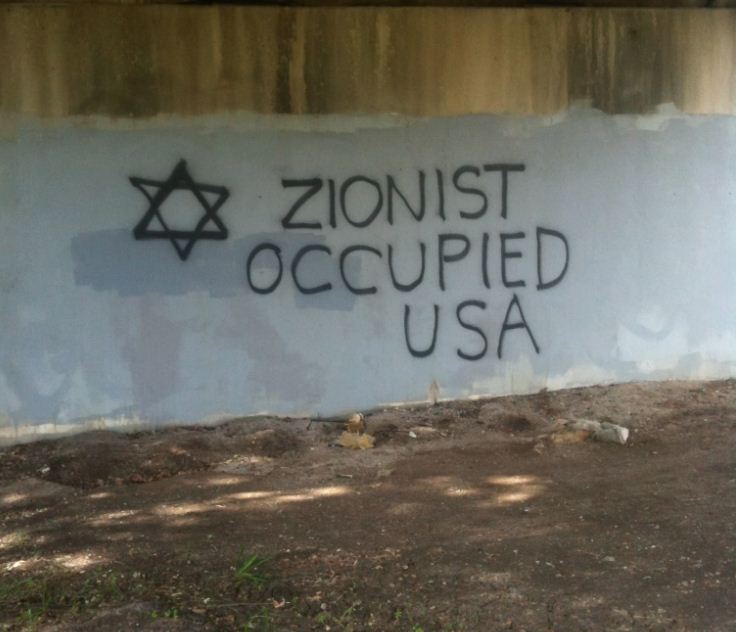 Where is all this hatred of Jews coming from? I have never seen anything like it. You would think the Jews are a different species from humans the way these idiots act. I have come to the conclusion that Jew bashing is the glue that holds all these hate groups together. I really don’t think the left hates the Jews (some do but not all) but have picked up the standard in order to join the other groups. The enemy of my enemy is my friend. For a while anyway. It would be amusing if it wasn’t so pathetic that the dims are made up of so many diverse groups including a majority of Jews. One wonders how they juggle them all and keep them all sweet. Well, lying helps. That, and producing a common enemy of them all…those dastardly republicans who want to destroy the country and those treasonous teabaggers who to destroy the government by making it smaller.

Forgive me for asking but beginning in 2002 all throughout the ‘anti-war’ protesting when the Leftist Fisters were hating on the Jews, blaming them for causing 9.11 and declaring that ‘Jews ran the White House’ did you notice the multitude of Lefties out on the streets displaying their Hate?

Occupy Wallstreet is just another form of ANSWER United for Peace and Justice dressed Code Pink.

But you hit the nail on the head with this Leftist tactic:

producing a common enemy of them all…those dastardly republicans

We do not have the luxury of another ten years of rinsing and repeating.

The Left is Vicious.

When the Left is seeking to take power, it creates enemies for purposes of propaganda, to demagogue the population.

When the Left gets power, and its polices inevitably fail, then the Left creates more enemies to blame.

I’ve lived in Texas (Austin, better known as Berkeley on the Colorado) since the late 70’s. The only anti-semitism I’ve EVER seen has come from the Klan (around here usually referred to as inbred morons, but that’s an insult to moron’s) and lefties.

Obama’s and the Democratic Party’s anti-semitic nonsense has some of my Jewish acquaintances planning on either voting republican or not voting this coming election. It’s that bad.

Divide and conquer-what the Left does best. Afterall, this is how Progressive Leftist Hitler rose to power.

Given the racist tactics of the Left, I am surprised that the Right has not made more of the fact that Progressives generally hate Jews.

If I was a politician, especially if I was running for President, I would make Obama’s frequent insults to Israel public knowledge.

It is long past time for a little cognitive dissonance for Progressives. And it is even more past time that they stop defining the conversion and go on defense.

We could raise an ethical and dignified issue every month that puts the progressives on their heels. The blogosphere would have a field day.

The “Occupy” movement more and more reminds me of the Brown Shirts.

If your reader has lived in Dallas for nearly 40 years but doesn’t “remember seeing a single piece of “zionist” or anti-semitic-related graffiti, ever,” then he or she either has a poor memory or doesn’t get out much. It’s pretty easy to find. Deep Ellum was practically wallpapered with it at one point in the late 80’s/early 90’s (the remnants of that time can still be found etched in formerly wet slabs of concrete where you’l find Swastikas still, today), but the skinhead invasion never left Dallas. It only ebbs and flows, and I’ve seen more of it within the past year. When traveling in ones and twos, the skinhead-types often get run off from the more “traditional” biker bars (like July Alley) where the regulars simply don’t abide by that type of nonsense.

Shame on you for pursuing success.

In a progressive utopia, a larger pie can never be baked. No more than one pie can ever exist. Everyone must have the same exact tiny, tiny, tiny sized piece.

If someone has a single microscopic crumb more than you, you can not possibly enjoy life.

It’s pretty much like the joke about the American, the Frenchman, and the Russian. I don’t recall the exact details but the punch line is that the Russian, seeing his neighbor get a cow that he lacks, kills the cow so his neighbor won’t have more than he does.

As near as I can tell, that is what OWS is all about.

As I recall, it was an Englishman, a Frenchman, and a Russian discover that today will be their last day on earth, and they’re discussing what they’re going to do.

The Englishman says that he’s going to take his favorite hounds out to his favorite patch of woods, and hunt until the ends comes.

The Frenchman says that he is going to take his favorite girlfriend out to their favorite restaurant, for a fine meal, good wine, and a night of love.

The Russian says, “I’m going to burn down my neighbor’s house.”

Not completely on-topic but I just found out that OWS in Oakland attacked a … Whole Foods?

I wonder what the Berkeley liberal-arts profs with their handmade Equadorian organic hemp fair-trade grocery bags are going to make of that?

It’s likely in part because their CEO is a fiscal conservative. One of my favorite quotes about changing from a liberal to a conservative is from him:

“Operating a business was a real education for me. There were bills to pay and a payroll to be met and we had trouble doing either because we lost half of our initial $45,000 of capital in our first year. Our customers thought our prices were too high and our employees thought they were being underpaid, and we were losing money.”

The reality is, everyone’s greedy

Just an observation: Out here, in the SF Bay Area, those who tend to Leftism are really big on being “transgressive” and have been for a long time. One can’t really be “kewl” without being transgressive to some substantial degree.

“Transgressive” starts with whatever pisses off your folks (who are often liberal) and moves on from there, so (for example) a lot of the kids smoke as this area was among the first to demonize smoking (other than pot).

But that’s where it gets dicey. Being the “wrong kind” of racist is dangerous. So I believe that a lot of them express anti-Semetic views just because that is a “safe” way to be racist, hence uber-transgressive.

When one thinks about it, it is quite sick (which, BTW, has become another word for “cool” out here, as in “my new car is totally sick”, which is not the way I mean it): kids acting racist for other kids to fit in.

So I don’t think many of these people are anti-Semetic in the same way that those who started pogroms were (or, in Europe still seem to be) — they just think they are being “cool” or perhaps “sick.”

This does not make it any better, in my view, as these people are so utterly devoid of thought, purpose, and character they have to fake ethnic hatred. (They can’t even seem to do nihilism right and their attempts at ennui are actually pretty comical.)

I’ve heard young OWS members out here state they are debased failures because “the system” — which has been entirely in the hands of liberals for the past 30 years — screwed them up.

And that is manifestly true.

If you recall from a few days ago, Obidiot announced a 1936 style platform to campaign on for his re-election? What else would be more in sync with this than brown shirts and graffiti? I suppose a chrystalnacht in one of the occupied territories is soon to come.