No you don’t read banned books

No you don’t read banned books

… unless you read the Bible in public school.

Spotted this vehicle in Albany, NY, last week when I made a day trip there (about 3 hours from Ithaca): 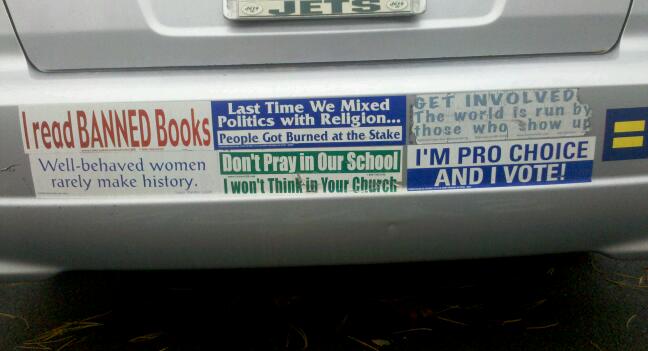 Last time we mixed politics and christianity we emancipated the slaves or perhaps we enacted the civil rights legislation of the 1960s. I think that made up for a few people being killed in the fever swamps of Mass. three hundred years ago. As for leaving thinking outside od church doors, the atheist occupy movement would be lucky if it could think anywhere.

Which public school bans students from carry a Bible?

This has got to be a female’s car. I sincerely hope this Jets fan’s husband doesn’t subscribe to the same crazed thinking.

Better yet, I hope she isn’t married and hopefully will not reproduce.

Public school students in the U.S. have the Constitutional right to read the Bible on their own time. Many schools also study the Bible in religious study courses.

One of the bumper stickers should carry a very strong message for those of us in Wisconsin who will be supporting Gov. Scott Walker in efforts against his recall. In the summer elections, at least some, if not all of those Senators who were recalled lost to candidates who received fewer votes than the recalled incumbent did in their initial election. This is hardly democracy at work, but instead tyranny of the minority. Any recall statute should include the provision that the winning candidate in a recall election should need to receive more votes than the candidate being recalled received when initially elected. Otherwise, “those who show up” can be a minority but indeed “run things.”

To those of you who are questioning the reading of Bibles and/or banning Bibles in public schools, here are some links and references on the topic:

There a many more links related to the Bible in public schools, and some that reflect a court decision re-stating that a child may read it on his/her own time. Included in some of the above links are relevant “boundaries” and what is and is not “establishment clause” violation.

This issue is not new, and the Professor correctly notes this – whether the “ban” is official or not. This very issue is one of the biggest reasons the ACLJ exists, along with Liberty Council as well: to protect people’s first amendment rights of free speech and religious liberty in public schools.

I believe that, at the very least, these references show that hostility toward having a Bible and reading it in public school is more the norm today. In fact, most cases reveal that the public school is a hostile environment to Christianity, and often target the Bible as “censored” material.

ACLJ lawyer Jay Sekulow is often heard commenting on public schools attempting to equate the Bible to pornography – i.e. “censored material.” As noted in this last link, Sekulow says, “The Bible is not a ‘banned’ book….,” but that hasn’t stopped schools from trying to ban it anyway.

There are numerous cases which have arisen over the last few years where teachers, schools, and others have attempted to keep children from even reading the Bible on their own as “silent reading” or “free time reading” etc.

Also, there have been cases where Gideons and others have been banned from handing out Bibles in or on public school property (NOTE: link is to the Freedom FROM Religion site); litigation inevitably ensues.

If there is not an official Federal “ban” on Bibles, then the PC police, atheists, and others are attempting to enforce one – albeit on the state and local level – just as they use PC to stifle free speech. And, unfortunately, they are succeeding.

Every case you cite concerns reading the Bible to students, not students having a Bible, there is a huge difference. As someone who was picked on and slammed into lockers as a child for being agnostic, and even once sent to the principles office for reading the Koran, I’m getting pretty sick of this Christian faux-victim mentality. If you think Christianity is being attacked in our public schools just because teachers aren’t allowed to force students to listen to the Bible, try being a non-Christian in a public school, and tell me which is really worse.

is there any other book which, if it could only be carried or read silently, you would not consider “banned.”

If that’s how you define banned, what do you call it when the book isn’t allowed to be carried or read at all? Super banned?

And why single out the Bible? Teachers can’t read in a devotional manner from the Koran, the Sruti, the Talmud or the Bhagavad Gita, are these too to be considered banned books? None of these were even in my schools library, there were five copies of the Bible. At least three teachers had their Bible’s prominently displayed on their desks. If that’s banned, I hope every book I write gets “banned”.

Nonsense. Assuming you did get intentionally slammed into a locker in school, it was for being a mouthy twerp, and not for “being agnostic.” I’m one of those parents that actually shows up in my boys’ schools, and nothing has changed.

Further, if you knew anything at all about Christians, including Catholics (also Jews) in this country, you’d know that most of them admit to having doubts about God’s existence, mainly because He refused to give us “proof.” A really fun exploration of this notion is in the movie “Oh, God!”

Right, I forgot, because you were there.

“Further, if you knew anything at all about Christians, including Catholics (also Jews) in this country, you’d know that most of them admit to having doubts about God’s existence, mainly because He refused to give us “proof.” A really fun exploration of this notion is in the movie “Oh, God!””
I’m not sure what that has to do with anything, this doesn’t respond at all to any of my assertions.

We defer to your greater expertise in “faux victimhood.”

I don’t think my beliefs are systematically under attack just because I’m not allowed to proselytize them to a captive audience. I don’t take offense to the fact that teachers had Bibles on their desks, or that our school library had Bibles but no other religious texts. I don’t think that all of these things led to kids picking on me in elementary school, kids will always pick on whoever is different, that’s part of growing up.

I’m not claiming to be a victim or to be under attack, I’m just pointing out my experiences to exemplify how Christianity isn’t either.

Awing, Christianity is under attack if by “attack” we mean being restricted from its heretofore central and unchallenged place in various facets of American public life.

Students can have and read a Bible, Koran, whatever on school grounds. They can talk to each other about it. They can evangelize to their little hearts’ content. The school itself and its teachers, however, must observe the strict separation of church and state.

You wouldn’t think such a thing would be controversial – after all, as you pointed out already – it’s a pretty neutral stance: The government cannot promote any religion or religion itself over the lack of it.

Some people, alas, are so accustomed to the special social and institutional privileges traditionally accorded to Christianity that merely asking them to play by the same rules as others strikes them as a vicious assault.

Hilarious. The next bumper sticker will not describe the human sacrifices at Planned Parenthood and other abortion clinics, which in less than half a century are responsible for the termination of over 50 million human lives.

Secular regimes are responsible for a greater number of dead and dispossessed people throughout the world and history than any religion. Well, other than Islam anyway, which remains in close competition. However, while Islam spread its tyranny over a period exceeding 1000 years, the secular regimes have matched and exceeded its oppression in less than 100 years.

Unfortunately for atheism and similar, their explicit rejection of a structured morality has left them open to the broadest of interpretations. When combined with left-wing ideology, that is a preference to accumulate wealth and power through authority, they have been principal contributors to the treacherous cycles of human history. As they promote physical and material instant gratification through redistributive and retributive change, they have denigrated individual dignity and devalue human life, both of which are causal contributors to progressive corruption of individuals and society. The corruption is exacerbated when the change occurs through involuntary exploitation.

I will judge each faith (i.e. perspective of reality) by the principles it engenders. A strict secular faith has consistently demonstrated that it is not worthy to be embraced by individuals of dignity. It has demonstrated a progressive predisposition to embrace individuals who suffer from delusions of grandeur and are otherwise corrupt. There was and is not any set of principles capable of moderating the decay which secular individuals introduce into a society.

There is corruption as a rule and corruption in the exception. If the secular faith desires to overcome the rule, then they must acknowledge their rejection of the natural and enlightened orders, and determine a suitable compromise capable of preserving individual dignity in a world with finitely accessible resources. Its adherent must moderate their dreams of both physical and material instant gratification, especially when realized through redistributive and retributive change.

One thing that strikes me about that bumper sticker is it’s gross stupidity. If a book is banned, it is supposedly illegal to sell, own, or read. I have looked closely through the lists of “banned” books and discovered that all of them are available for sale, perfectly legally, in the US. As far as I can tell, there are no books that are actually banned in the US. The bumper sticker makes about as much sense as an “I BRAKE 4 UNICORNS” sign.

Brian, do you mean you don’t brake for unicorns? For shame! ;-p