Posted by William A. Jacobson Monday, November 7, 2011 at 07:00am 8 Comments
More Sharing Options

to be anti-Republican in New York, because almost everyone who disagrees with you already has moved to Texas.

We’ve seen these subway ads taking shots at Republicans before.  Thanks to reader Thomas who took this photo and writes:

Spotted on the #1 train en route to my office. MMS ads are common eyesores on the train but this is the first to mention Mitt + open endorsement of Obama’s re-election.

Just a snapshot what it’s like living in an outwardly cosmopolitan city with an openly provincial hatred of Republicans. 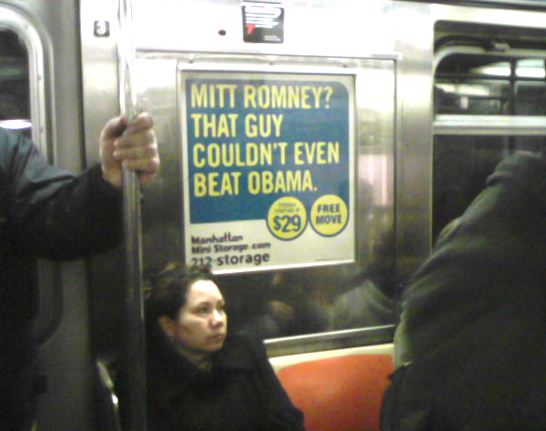 How is it that a taxpayer funded industry (public transportation) is allowed to post this? Is MMS a company or the name of the rail?

I fail to make the leap of illogic from “Romney can’t beat Obama” to moving and storage.

Must be a New York thing.

But, I don’t see how “couldn’t even beat Obama” says they leftists support Obama, and believe Obama to be strong.

I’ve .. well, actually my wife, has some friends from NYC who have moved near us. They typically use “devil” and “Republican” interchangeably.

I have a friend from New Orleans that once told me he was twelve years old before he realized that “damn” and “Yankee” were two separate words.

I told him that I grew up in a family of diehard Red Sox fans and had the same experience.

It seems like yesterday the same company was probably advertising:
Robert Turner? That guy couldn’t win in District 9.

I actually like the current ad. It shows me there is panic on the Left. There is very little enthusiasm if the have to resort to this kind of ad. It really is a page from the Democrats “He can’t win” campaign against Tom Dewey in 1948.

You have to understand NYC is full of the entitlement crowd. How they survive in this overpriced slum I don’t understand. It’s a real joke for New Yorkers to call themselves liberals (you know the people who care about the downtrodden) when they can’t be bothered to help someone being attacked on the street or even calling the police to report it. I have never forgotten Kitty Genovese. New Yorkers kinda cleaned up their act for a while but are back to the old care for nobody attitude they have always had.

MMS ads are consistently vile. Some years ago they touted their services for those “whose closets were as narrow as Republican minds”.