I’m beginning to like these Herman Cain internet ads

I’m beginning to like these Herman Cain internet ads

I don’t know whether the chalk this up to the Google algorithm, Cain campaign strategery, or just luck, but how great is it to have a Herman Cain internet ad appear on Phil Och’s mocking Love Me, I’m A Liberal song at YouTube. 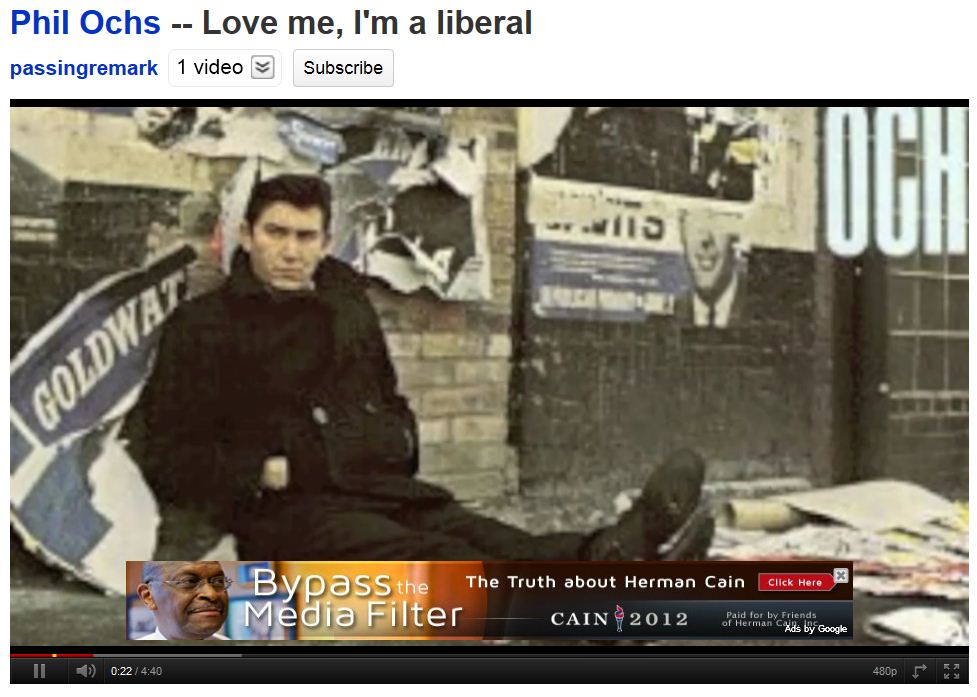 And here’s the video:

I ask you again about what you think re: Justiagate.

I see that others are encouraging Leo Donofrio to contact you. You ignored my last comment asking what you think about Justiagate.

Will you respond now?

What I think about “Justiagate” is that I’m not going to get bogged down in it. Any lawyer representing a party in litigation would use Westlaw or Lexis for legal research, not the net. I just checked Westlaw and it has a full citation history for the Minor case. So the claim is that Justia attempted to hide a case history from a public database which is not even used by practicing lawyers ? And even if we look at public databases, I don’t know what Justia did or didn’t do but obviously the case history is known because people are arguing about it. If you or others want to make a big deal about it go ahead, but don’t include me. See this discussion, http://claytonecramer.blogspot.com/2011/10/very-odd-rapidly-changing-history.html

Thank you, Professor, for making your position clear. I appreciate when respected members of a profession such as yours goes on record stating a particular position.

This will make it clear to anyone interested in learning about online legal research sites that you do not want to be affiliated with it.

Some are saying I was remiss in not telling you about Cornell University’s link to Justigate. It is my contention that you would have already known that before speaking out about Justiagate.

Just as a reminder, here’s the original comment I posted:

Prof. Jacobson: What is your take on Justiagate? Should we stop trusting online sources regardless of their prominent reputation in the real world? Thanks!

Here are some more of his new ads, Mr. Jacobson

I wasn’t a big Phil Ochs fan (even though I’m very much from that era – born 1946), so it was with great pleasure that I listened to that song. I’m now going to listen to ALL his songs on Spotify to see what others treasures there are.

Thanks for being you.

Look Who Cited To Justia For Supreme Court Holding
http://naturalborncitizen.wordpress.com/2011/10/28/look-who-cited-to-justia-for-supreme-court-holding/

“There’s a bogus astroturfing mantra going ’round the blogosphere which sounds something like this, “No real lawyer would ever use an online web site like Justia.“ The talking point is thoroughly debunked by a very powerful legal source. Ever heard of Perkins Coie? They are the law firm which defended Obama in eligibility suits before he was elected. Ever heard of Bob Bauer? He is a partner in Perkins Coie and was General Counsel of Obama For America 2008, then White House Counsel, and is now back in private practice as Obama’s personal attorney to lead the charge in the 2012 election.

Perkins Coie is as powerful and shrewd a law firm as has ever existed and hey, what do you know kids, their mega influential legal blog cited to Justia in an article published there on June 28, 2010, “Business Methods Patents Survive, But Not Bilski’s Patent“:

“The next key decision was Parker v. Flook, 437 U.S. 584 (1978)[3]. The process claims there involved a practical application (updating the value of an alarm limit for ending a chemical reaction), but the only novel feature of the process was the specific manner in which the alarm limit was calculated…

So much for the “real lawyers don’t use online web sites like Justia” try. Perkins Coie certainly did. Now, post JustiaGate… not so much.”

[Read more at the link.]

Sorry, a law firm using a link to Justia in an article doesn’t address my point that practicins lawyers when they do legal research do not rely on Justia. And I’m not going to get dragged any further into “Justiagate” so take it elsewhere.

what did you do to get this stuff tossed onto you?
must have been bad LOL 🙂

You linked to supreme.justia?? Huh?

“Practicing lawyers” may only use paid subscription sites for doing “legal research”, but how about the remaining 99% of the public who rely on sites like Justia? Try googling a SCOTUS decision and see how often the Justia link shows up first….Oh, wait, you must have already done that…

Inconceivable that his audience knew what they were listening to.