I told you already, Si!

I told you already, Si!

Posted by William A. Jacobson Friday, November 4, 2011 at 07:00am 4 Comments
More Sharing Options

Thanks to a reader who writes:

…. saw this car in a UPMC [Univ. of Pitt. Medical Center] parking lot here in Pittsburgh. Love your blog, it reminds me there are folks like me out there in academia.

There are more of us than you know, most of us just won’t admit it in public. 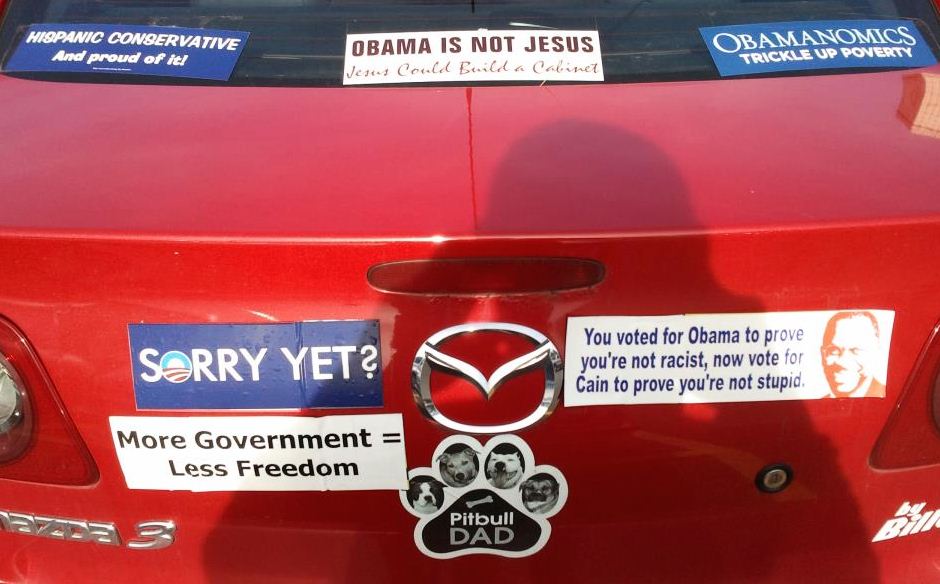 Hey Professor get a load of this comment from the Mayor of Oakland. Now according to the story 103 people were arrested , 8 people were hurt, the police had to use tear gas and flash bangs, windows were broke, 10’s of thousands in damage and the good Mayor thinks it was a peaceful event…… somehow I don’t think the word peaceful means what she thinks it means

“It shouldn’t mar the overall impact of the demonstration and the fact that people in the 99 percent movement demonstrated peacefully and, for the most part, were productive and very peaceful,” Quan said.

There are some good ones on there. Might try to get one of the Cain ones 🙂

I love the one on the lower right! “…don’t be stupid!”

They probably remember the official corruption which is rife throughout most, or maybe all, Latin American nations. Unfortunately, it is known all to well here as well and it appears to be a progressive condition. What remains to be determined is if authoritarian interests were instigators or conspirators of the corruption.