banning signage on trucks other than the name and logo of the company, although waivers will be issued to companies which can demonstrate hardship, in the discretion of the Secretary of Transportation?

Thanks to Michael from Constant Conservative who took this photo just south of Tea, South Dakota, and writes:

I snapped this today during my flyover country commute. Based on the professional appearance of the message, this would seem to be a corporate rather than a personal statement–another reminder that it is a good thing that corporations also have freedom of speech. 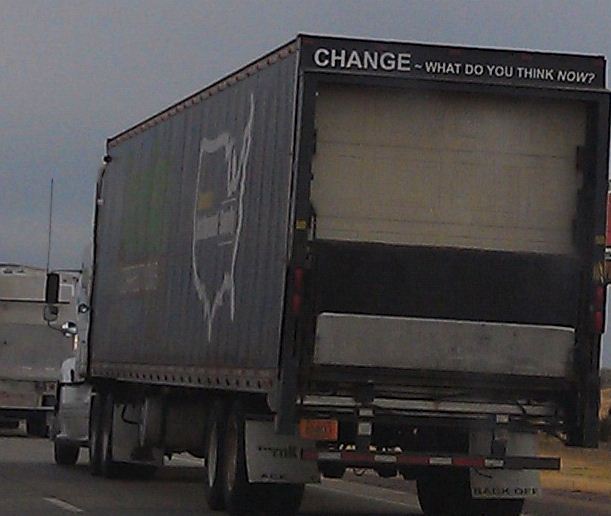 [Note 9:27 a.m.: Headline and first sentence changed to frame it as a question.]

Look for a new propaganda czar to be appointed soon.

How can this be done? Is it not an infringement on a company’s freedom of speech? If they allow their employees to put signage on their vehicles, is that not up to the company?

Federal regulations and taxes are two of the heaviest burdens on Americans.

Get your boot off our necks, federal government! Stop controlling, via regulations, laws, or punitive tax rates EVERY aspect of our lives! Light bulbs. Toilets. What we ‘should’ eat. …

I guess my attempt at sarcasm was not clear enough, perhaps because no one would be surprised if they did pass such a regulation after seeing this truck.

Professor: You had me fooled. I was ready to check out the Federal Register.

Perhaps it isn’t your lack of sarcastic savvy as much as it’s how outrageous this administration has become and what we’ve come to expect from it?

You got me. I went looking…. I was all prepared to go on a rant, too. Probably won’t happen in this administration because a fair chunk of the trucking industry is still controlled by the Teamsters… and practically because there would be a lot of issues generally with banning this on commercial vehicles since so many buses are getting advertising wraps these days.

This picture is actually one of the first I’ve seen with a purely political message. I know Covenant Transport has had pro-life messages on its trucks from time to time. There’s another trucking company that has ads for the Marine Corps on its trailers.

I’d suspect that this would never pass on free speech grounds, although I suppose that this could get rolling if a driver claimed that he or she was being forced to drive around with a statement on the truck that they didn’t agree with. That would probably be something started by EEOC rather than DOT as a hostile work environment or something. DOT could regulate stuff that impacted safety or was a distraction.

But it is telling about where we think government has gone when we immediately react to sarcasm like this. I’ll stay out of the partisan muck, because this sort of thing comes from both sides of the aisle.

picunnin:
…so many buses are getting advertising wraps these days.

That would be so easy to get around: government vehicles would be excluded. So city buses could have advertising, but private corporations could not.

Sort of like advertisers on NPR and affiliates don’t have to pay taxes on the money they “donate” to broadcast their businesses.

No, you didn’t fail……the problem is it is all to possible and believable.

Thanks for changing it, though. 😉

Have a wonderful Sunday, Professor. Hope it is as beautiful there as it is here – sunny, blue skies, fall tinge of a chill. 😀

It’s a good thing the government is focusing on important things during this time of severe unemployment.

After the ban on unnecessary graphics on trucks, they can move on to ban bumper stickers on cars. And following that, they can ban billboards that have anything other than logos. Next, the food wrappers will be scrutinized. Then they can crack down on the insidious message that appear on books of matches. I will welcome the banning of graffiti on rail cars because after all, that stuff is much more detrimental than truck graphics. I hope they go after all the kids who have posters in their rooms – those posters are totally unnecessary in my view.

BTW, who is doing the banning? Is this being done by the EPA, Dept of Commerce, the Dept of the Interior, or is this a joint effort?

It wouldn’t need Legislation, just a ruling. There is no language in Transportation Law that allows for Corporation Sponsored Political Speech… and you could say it was a distraction, declare trucks ‘Rolling Billboards’ and so subject to the ‘No Billboards’ laws. It would be quite simple.

But Truckers, esp. Independent Truckers, are a spirited bunch. Squeeze ’em hard, and they’ll explode. Wanna see DC traffic congeal from 1AM onward? They’d do it on a lark, and choose a day most important to the Obama/Reid/Pelosi groups. Call it #Occupy Freeway…

I have to laugh… you’re now getting advertising from the trucking industry. Maybe we should be worried about Google…

ACTUALLY the Midnight Truckin’ guys have been talking about for years some of the regulations being imposed on them in other areas. Who knows what’s next. Did you ever think we’d get where we are now?

Reliving the sixties with older goons in stinky tents in all the major cities?