Cain accuser – now not willing to talk // Added: Politico and NY Times spin refusal as accuser “confirming” and “standing by” her complaint

Cain accuser – now not willing to talk // Added: Politico and NY Times spin refusal as accuser “confirming” and “standing by” her complaint

That’s the word I’m hearing.  Even though the National Restaurant Association was willing to waive the confidentiality agreement.

Joel Bennett, the attorney for one the women who has accused Herman Cain of sexual harassment, said Friday that his client “made a complaint in good faith about a series of inappropriate behaviors and unwanted advances” from the GOP presidential candidate.

Bennett said his client sees “no value” in revisiting the issue now, but “stands by the complaint that she made.”

Bennett said his client would disagree with Cain’s characterization of the alleged harassment incidents.

He confirmed that the alleged harassment occurred in 1999 over a period of “at least a month or two.” There was “more than one incident,” he said.

The National Restaurant Association confirmed in a statement Friday that a woman working for the organization filed a complaint in 1999 alleging discrimination and harassment by Cain. Cain was president of the association at the time. The association and the woman “subsequently entered into an agreement to resolve the matter, without any admission of liability. Mr. Cain was not a party to that agreement,” the statement from National Restaurant Association President and CEO Dawn Sweeney said

Nice job Politico.  You had second- and third-hand information from which you spun a tail of Herman Cain as an aggressor, you never even spoke to the original source, and now all we ever will know is your spin.

Here is how Politico trumpets the news to excuse it’s own shoddy reporting tactics: 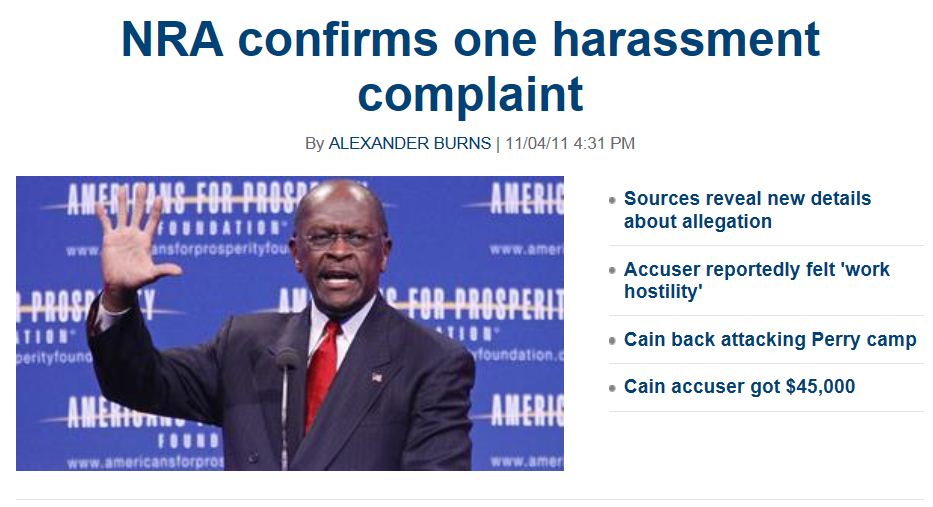 Here’s equivalent spin from The NY Times which pretends that someone refusing to back up her complaint with facts — even anonymously and even when released from a confidentiality agreement — means that she stood by her complaint:

Progress made – Ace: “So now I’m thinking her claim was trumped up.”

Robert Stacy McCain: “Lawyer ethics” — Hold a press conference to announce that you don’t want to discuss your smear-job against your client’s former boss.

Sort of like Mark McGwire, during testimony before Congress about past steroid abuse, saying something like “I’m not here to talk about the past.”

…..or perhaps her attorney has not had the time to explain the definition of the word ‘it’ to her 🙂

Her lawyer said she “stands by her complaint”.

Her other option was to admit to making it all up and giving back the money, and being liable?

Well, since we don’t know the details of the complaint, maybe she’s not lying. Perhaps her complaint simply was: “I want outta here — gimme some money or I’ll make a stink” and for whatever reason, they did.

So she could be standing by that, entirely truthfully.

I was thinking something like that or poor job review and she struck back over it.

Plausible. That was in fact my first thought.

Well she might be lying, and she didn’t admit to it … I wasn’t going for journalistic integrity there 🙂

I’m guessing he might be just a little raw sometimes, or maybe just average for older guys around younger women. Certainly not in the same league as Clinton.

Whatever reason? Because it’s standard operating procedure for an incompetent / Machiavellian member of an Official Victim Group.

“Pay me or watch me ruin your company’s rep, force you to pay to defend the lawsuits / EEOC complaints / etc. Which is cheaper?

Looks like they shot their wad on this. (No pun intended!)

I fully expect an announcement soon that the anonymous “victim” has signed a book deal contract contingent on Cain becoming the nominee.

you know this is one of the few places covering this w/o an open agenda.

and yes I am a cain supporter.

that should say without an agenda,

got distracted and can’t edit.

“I stand by the complaint though I won’t tell you what the actual complaint was and even though Mr. Cain wasn’t party to the settlement agreement and doesn’t know either.” –Anonymous

You are most likely right. Nobody ever lost money betting on the perfidy of the MSM…

I’ll give her the benefit of the doubt and that at the time she thought she had a valid claim.

SH cases still are so ambiguous as to when a crime has been committed. Which is why so many companies settle to make it go away. Case law is mixed and what laws there are can be interpreted many different ways. Eyes of the beholder and all that.

Still it does say something about the weakness of her case that she has decided not to air it.

I said before that if she was looking to do him damage this was the best way to do it if her complaint was weak.

And so we get another example of the double standard of the Major Media. Clinton can lie in court and it’s ok. Cain has a vague unsubstantiated CLAIM made and he’s guilty.

Although the final nails haven’t finished them off yet, the Major Media has built their coffin, dug the hole and are now putting in the lining before they lie down and get buried.

Since Obama got elected there is NO ONE who doesn’t see/believe that they act with a double standard.

They can NO longer claim objectivity and that they have NO bias.

Watched it. Here’s how it will go.

She’ll be outed within 72 hours by someone other than the MSM, who will let it alone for perhaps 24 more hours. Then, her privacy and honor having been respected by the responsible, honorable, caring MSM, there will be a few harmless interviews by the evening talking heads who will then move on to Herman Cain for the duration. Confidentiality agreements in hand, she’ll do the rounds; morning talk shows, evening news magazines, cable “news” shows, the late-niters.

Not exactly a government job doing the people’s work
(sigh), probably much more stressful but it will pay a lot more.

Meanwhile, the boring stuff back in Washington; I wonder what tonight’s executive order will be?

Politico says she already has a government job:

Reading a statement he said he wrote jointly with his client, Bennett noted that she resolved the complaints through a financial settlement with the National Restaurant Association. He declined to say for how much, but POLITICO has reported it was approximately $45,000.

Bennett indicated that the woman, now a federal employee, enjoys her current post and doesn’t want to publicly recount her experience with Cain

My point, precisely. Her lawyer said so, but this isn’t going to go away. Don’t lose sight of the goal – Herman Cain. She is simply the path to get there; that cannot be changed. That said, her lawyer said others were harassed (involved?) so the attention may shift if one of them is willing to come forward. The only certainty is that it’s not over.

In Just Six Days, Politico Published 90 Cain Stories; How Does That Compare to Other Scandals? - Big Journalism | November 4, 2011 at 5:40 pm

[…] and others spun that refusal to talk through the JournoList Machine and declared it “confirmation” and the “breaking of silence.”  What were have here is a full-blown feeding […]

[…] basic point I made this morning: “Whiskey Tango Foxtrot, Politico?”UPDATE III (RSM): Professor William Jacobson catches both Politico and the New York Times spinning the lawyer’s ridiculous press conference — at which he announced his client […]

In Just Six Days, Politico Published 90 Cain Stories; How Does That Compare to Other Scandals? | We The Conservatives | November 4, 2011 at 6:20 pm

[…] and others spun that refusal to talk through the JournoList Machine and declared it “confirmation” and the “breaking of silence.”  What were have here is a full-blown feeding […]