The initial phase of the prisoner exchange for the freedom of Gilad Shalit is completed.  This interview was broadcast on Egyptian TV, as described in The Jerusalem Post:

Schalit, who seemed shocked and distressed, was asked a number of questions by an Egyptian reporter, including how he was feeling, to which he answered: “I am nervous.”

Schalit was asked if he would campaign for the release of the 4,000 Palestinian prisoners that are still held in Israel to which he said that he would be happy if they were released, stressing that he hoped “they would not come back to Israel to fight in wars.”

The interviewer also asked him about the Egyptian role in his release to which Schalit replied: “I am grateful for their help.”

When asked what he missed the most, he answered first of all his family and then went on to explain that he missed talking to people and he was looking forward to not sitting in a room alone all day.

Shalit being greeted by Prime Minister Netanyahu (via The Guardian): 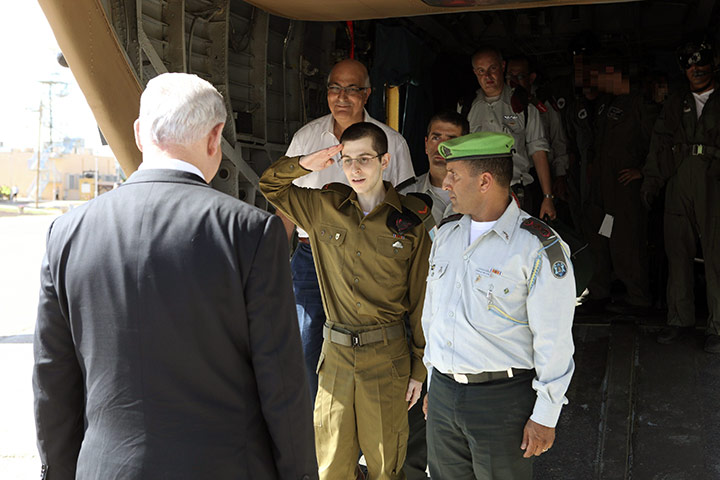 Abu Attaya, spokesman of the Popular Resistance Committees, whose fighters joined Hamas in the capture of Shalit, said militants would kidnap more Israeli soldiers until all Palestinian prisoners are freed.

“The coming weeks and month will witness more responses and more, similar operations. We will continue the same path to kidnap Zionist soldiers in order to clear all prisons,” the masked spokesman said, clutching an AK 47 assault rifle.

“Today the resistance talks,” an activist cried over the loudspeaker of one mosque. “Today the enemy submitted to our demands and that was just the start.”

Update: Photo via @IsraeliPM of Shalit with his father, Netanyahu, Ehud Barak:

This is not good. I’m sorry but I think this has to be the dumbest thing Israel has ever done. 1000 to 1? How is Shalit going to feel once the body counts start coming in for Israelis killed whose killers are part of that 1k?

My perspective: This trade establishes the value of terrorist scum at 1/10th of 1% of one Israeli soldier.

Regardless of the 1000 scum released, there are already 10’s of 1000’s others who are just as vile who’ve never been captured.

The dead from terror cannot be recovered, but a live soldier kept alive for this absurd ransom can be. Future soldiers will know this.

Let this be a lesson to Israeli soldiers. Shoot first anyone who tries to approach them. Ask questions later. That should be true of our soldiers too. We don’t know who is the enemy. These people hide behind civilians and I question even the civilians’ motives. I got tired long ago hearing about our attacking innocent people at bogus weddings, funerals and childrens’ parties.

I hope and pray that this poor man, Gilad Shalit, will both have excellent counseling after his captivity, and be able to tell the world what happened to him without fear of reprisals from his captors against Israel.

I am appalled at his appearance! He looks skeletal. What did they do to him, how was he treated? Given the evil hatred his captors hold for “Zionists” – especially Israeli soldiers – it is amazing that he is alive. I hope he is both physically well and mentally stable after such an unimaginably difficult experience. Its impact is life changing, even life shattering. I pray for him.

Still I must ask, is it worth the cost, this trade? Those released are being celebrated as heroes by Hamas and Gilad’s captors; the released will surely attempt more terror on Israel; the prisoner trade encourages the capture of more Israeli soldiers, resulting in Israel telling their soldiers to kill themselves and/or others if there is a chance of them being captured by such ruthless enemies.

What a world we now live in.

We in the US must use this as fuel to ensure the next president elected, along with our government policy overall, unequivocally support Israel and a strong, well-defended, steadfast US. Our international reputation needs to be restored, must again reflect our unequivocal strength in the face of threat or aggression.

The good of the many outweighs the good of the few. To quote Caiaphas, it is better for one man to die than for the whole nation to perish.

I’m sorry, but as a father putting myself in his father’s shoes … seeing him there with his boy after five years of (the father’s) endless torture of being haunted by what they may be doing to his son, I can’t help but feel joy.

I hope good (for lack of a better word) comes from this … that Israel, after finding someone guilty of terrorism, executes them quickly thereafter. I don’t say that lightly … I have mixed feelings about capital punishment, although I lean to the pro- side. In Israel’s case, I believe the terrorist have given Israel no choice.

Gilad Shalit has been freed from the terrorists … but now must live with the guilt he will no doubt feel because of the release of the 1,000. I don’t envy him.

Unfortunately Israel doesn’t execute people. Capital punishment is theoretically on the books, but it’s only been used once, for Eichmann. No court in Israel today would ever consider using it, especially since the Israeli judiciary is a fully-owned subsidiary of the left.

When you reward something, you get more of it.

I’ve been wondering about something. It wouldn’t have been that hard to put microchip transmitters in all the prisoners Israel released, and to track them globally via satellite.

It wouldn’t work all the time, but anytime they stepped outside of a building, a sub-dermal active RFID micro-transmitter would probably be able to give off a sufficiently strong signal to be picked up from orbit. Also, it wouldn’t last forever, but probably for 5 years or so.

If they did something like this, that may be why Israel would have agreed to this sort of prisoner swap, because they know that they can actually track the released terrorists in real time, and any that rejoin terror activities would be putting planned operations at risk.

Netanyahu is no fool.

Certain, I am, that he has a plan to remove the threat that these newly released animals pose to Israel.

Besides, he may have made a solemn promise, an oath to fulfill.

I would not be sold bold as to believe everything is as it appears….Israel is very good at what they do–they have to be; they live in a pretty tough neighborhood.

What on earth would make you say Netanyahu is not a fool? What in his record supports that? On the contrary, this is just another step in his long career of folly, entirely consistent with the way he has always operated. I stopped expecting anything better from him a few months into his first stint as PM, when he withdrew from Hevron.

As a solider and veteran of RVN, I know one thing: What it must feel like to be in Shalit’s shoes. All this agonizing over value given for value received? Spare me. Shalit no doubt wanted to come home. He didn’t ask others to die for him to rescue him. He was and is a soldier, damnit, and now he’s home. I can only hope his mind is still strong enough to live a normal life. In Israel than can mean many more years of service. That I mourn those who’ve died for righteousness does not prevent me from rejoicing about a survivor.

Just so there’s no idea that I am some damn peacenik, my opinion on what Gaza should should look like today is here. No, that’s not Vietnam, but Point du Hoc after D-Day. No mercy. Arc Light is the right light.

I don’t think Israel has the death penalty even for terrorist acts. Most of the deaths come from combat actions. The uber liberal Israeli Supreme Court has basically been an remake of the Warren Court on steroids. It is a travesty that the likud party has not ended this farce of a Supreme Court and reformed the way its members are elected and removed from office and the scope of its jurisdiction.

For five years while Gilad Shalit was a prisoner, did any nation withhold funding from the Arabs? Did any nation demand, on the floor of the UN, that Shalit be released? Did any nation condemn the human rights violation of his kidnapping and imprisonment? Apart from Israel, that is? Yet, had Israel done what Hamas, which means violence in Hebrew, did, they would have been roundly condemned. Israel needs to get serious and stop apologizing for its existence by its actions. Your right to life means that those who actively threaten it should no longer live.