Butcher of Ramallah soon to be free

Butcher of Ramallah soon to be free

As part of the deal to free Gilad Shalit, the butcher of Ramallah who participated in the disemboweling and mutilation of two Israeli soldiers who took a wrong turn on a road in the West Bank in October 2000 at the start of the 1st Intifada, will be set free:

Abed el-Aziz Salha, who was 20 at the time of the lynch, was arrested in 2001 and was sentenced to life in prison. He became infamous following an image taken during the lynching, in which he waved his bloody hands outside the Ramallah police station in which the attack took place.

Salha arrived at the police station once he heard the soldiers were held there, entering the structure through the window. He then proceeded to go from room to room. He then saw Vadim Norzhich as he was lying on his stomach with a knife sticking out of his back, and 15 people kicking him.

Salha then proceeded to remove the knife from the IDF reservist’s back, only to stab him another three times, at which time he proceeded to wave his bloodied hands outside the window. 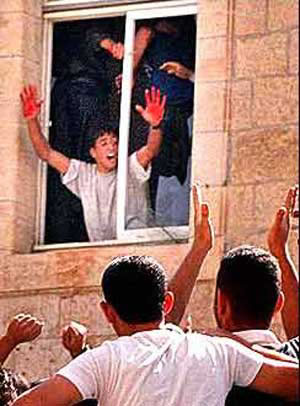 The story is gruesome:

The soldiers were beaten, stabbed, had their eyes gouged out, and were disemboweled. At this point, a Palestinian (later identified as Aziz Salha), appeared at the police station window, displaying his blood-stained hands to the crowd, which erupted into cheers. One of the soldier’s bodies was then thrown out the window and stamped and beaten by the enraged mob. One of the bodies was set on fire. Soon after, the mob dragged the two mutilated bodies to Al-Manara Square in the city center as the crowd began an impromptu victory celebration

Photos of the mutilated bodies are here (warning, shocking photos), and there is more at American Power.

The video needs no translation:

Some might call them “animals,” but animals kill to eat. They don’t mutilate for pleasure. These people are far below animals.

How do you negotiate in good faith with people who have made bloody, vile hatred a norm for their culture?

Rabid hatred like that must be inculcated from childhood.

Here’s an idea: Forgive all the student loans and any other debt of the OWS protesters … and for their anti-American, anti-Semitic beliefs, grant them free passage to Gaza. They are suddenly debt free, and they are instantly part of a larger movement … even more romanticized, really “authentic.” They no longer would have to deal with debt, Jewish bankers, American corporations … and, in return, we’d no longer have to deal with them. Give the Palestinians thousands and thousands of useful idiots instead of the vicious murderers.

Actually, there are animals (other than humans) who, as far as we can tell, do kill for reason other than food. Chimpanzees are among them.

“Actually, there are animals (other than humans) who, as far as we can tell, do kill for reason other than food. Chimpanzees are among them.”

And actually, Iowa Jim, there are midwesterners who, as far as I can tell, can be as pedantic as us coastal blowhards! 🙂

Jim, I swear to G-d I was thinking a bit about Chimps as I wrote that. I’m a big natural science buff. I looked upon Mutual of Omaha’s Wild Kingdom’s Marlin Perkins as a kindly uncle. Yes, technically you are right and I am impressed (let me stress, because of my fear of the limitations of communicating on the internet, and the chance for misunderstanding, that I’m affectionately kidding you about the pedantic charge. I know what a good guy you are).

Chimpanzees have also been shown by researchers to be quite capable of intentional, conscious deceit.

I’ll modify my comment to exclude chimpanzees (and killer whales, too, by the way).

No offense taken. I spent about thirty-five years in Silicon Valley myself, so I used to be coastal, too (although I’m originally from Illinois). The bit about animals killing only to eat just happens to be a bit of a hot-button for me.

Aren’t there many animals that kill for fun? Minks, for instance. Polar bears? In fact don’t cats kill for fun? They certainly enjoy torturing their prey, and often don’t eat it.

Luke -you are closer tan you can imagine.. Many of the 60s radicals from Germany & Japan ( ok don’t say it ) went off to “Palestine ” to do The Great Thing in the 60s. I don’t know if Ulrike made it before capture but it was like some odyssey or Mecca.

This week I watched a doco but did not last -even though I should have for current parallels — because their clothes were very disappointing. I was 11 at the time but already sewing up a storm of halter neck geometric shifts , complete polka dot outfits s & floral bell bottoms.

Yomo Okomoto or whatever his name was, the Japanese guy who shot up Ben Gurion Airport back in the early ’70s, and was released in one of these prisoner swaps.

I wish I could make a profound comment about this horror but…I have no words…just disgust.

The Israelis should free this monster in the same manner the Russians ‘freed’ Somali pirates–in a small boat in shark infested waters and only allegedly alive.

[…] Read it. As part of the deal to free Gilad Shalit, the butcher of Ramallah who participated in the disemboweling and mutilation of two Israeli soldiers who took a wrong turn on a road in the West Bank in October 2000 at the start of the 1st Intifada, will be set free: […]

Words defy me. There is really nothing profound anyone can say in the face of such horror.

These savages share something in common with the OWS + London Rioters + ( just about every murderous mob throughout history): An institutionally cultivated, irrational and homicidal rage against their economic and human betters.

Mossad, you got your work cut out for you.

Yoram Cohen says if there had been a viable military option, “we would have chosen it”; says he thinks Israel can “deal with potential dangers.”…”
The joy of the Shalit family to get their precious child again in contrast to the horror of the families of previous victims and future victims. If Hamas decides to kidnap more IDF soldiers, then the IDF should decide to take no further prisoners or better yet utilize drones (like the U.S.) to empty Gaza. How much money has Israel invested in keeping those 1,027 prisoners alive for over 10 years? An eye for an eye was the law of the prophet Moses. Mosaic law supports the death penalty.I believe Binyamin Netanyahu is a modern day version of the Old Testament prophets. He recently read the 38th chapter of Ezekiel publicly believing it will shortly happen.

The families of previous victims have filed this petition:

I cannot express enough how depressing this news is to me. The slaughter of innocence without justice being served.

Ok – I have thought of a few parallels -the closest I can come up with is Chechnya. Two things are different -the base Chechnyan though muslim was better educated than Palestinians plus nobody wants The Palestinians anywhere else.

So they are a forever isolated bunch of low educated peoples.

Yeltsin made huge mistakes in Checnya which Putin reversed . Putin paid off one side against the other promising Team A they could rule Chechnya as long as they took out their rivals.

The West tried to pay of Abbas (fatah ) against Hamas but Abbas was weak & toady just taking the money & did not wipe out Hamas. Now perhaps they are buying out Hamas to wipe out Fatah.

I am afraid this looks like their only choice. The West must stay out -leave it entirely to Israel.

Agonizing over this. Why haven’t fluke worms such as the butcher of Ramallah been executed long before now. The swaps still would be made with other prisoners. At least they could lobotomize them or something before trading?

Equally as disturbing are the Jews who stand with these terrorists.

[…] | Debatt | svt.se Plan to Release Palestinian Prisoners Spurs Debate From Family of Israeli V.. » Butcher of Ramallah soon to be free – LeÂ·gal InÂ·surÂ·recÂ·tion Rubin Reports  » Strategic Notes on the Gilad Shalit Prisoner Exchang.. What Does The […]

I would call them animals, but that would be to defame the animal kingdom.

These people are devils out of a dark nightmare of horror. Mindless. Bloodthirsty. Vicious. Without conscience. Evil. Cruel. Wicked. Vile. What can be said of such a people? May God have mercy on their souls.

So this is what passes for a victim to the post-modernist anti-colonial left? God help the Republic. God help Israel.