I wasn’t going to run a bumper sticker post today, because the over-the-top nature of most of them seemed out of place.  But then reader Lenny sent this one, which I think fits.

It’s on a neighbor kid’s old pos pick-up truck in south Saint Louis. He got the truck from his step dad’s brother. Step dad is a union carpenter and I assume he’s OK with it. They’ve had it for almost a year. Today was the first time I had to park behind it and that’s how I noticed the sticker. 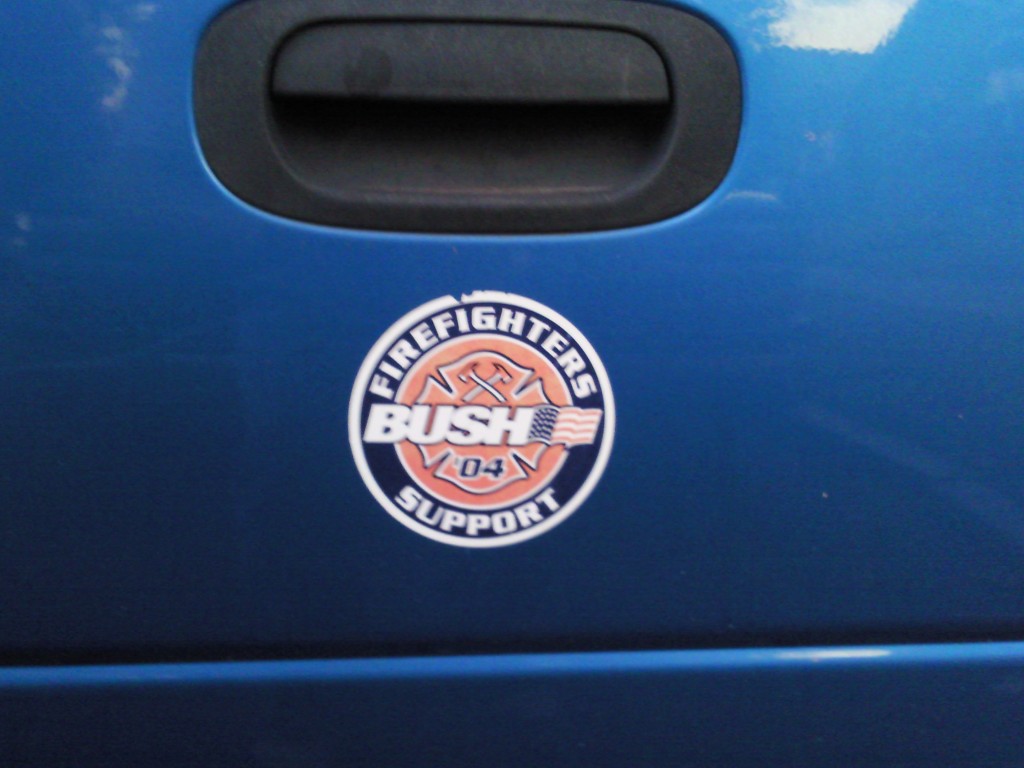 Thank you for all you do.

I live in the Corning, NY, area. It’s primarily rural, and the population is low. Keep that in mind when you read the following, an account of what happened to me back on 6/8/2010:

As I was walking to my car in the supermarket parking lot this morning, I heard a man shouting. I figured he was shouting because it was very windy. It didn’t occur to me that he was shouting at me. Instead I thought he was probably shouting to a friend. When I reached my car, I looked up and saw the shouter in a new-looking black truck and didn’t recognize him. He sounded very angry as he shouted BUSH WAS A F’N IDIOT JUST LIKE YOU! I ignored him then realized he must have seen the W sticker in the opera window of my car. When he drove by I could see he was really worked up, LIVID, as he looked right at me and shouted it again. This time he added, YOU EVEN LOOK LIKE A F’N IDIOT! I was unnerved by his visible rage, especially since he was shouting at me before I had even reached my car.

I removed the sticker after that because I was worried my windows might get smashed next. Here is the sticker:

I’m sorry to read about that experience, Kitty, and the necessity of removing your sticker. Last fall when I made political calls to registered Republicans, several people told me that they dare not post Republican political yard signs in their yards in Ithaca (not far from you) for fear of damage to their property and/or their children getting hassled in school.

“They” voice their opinions and we’re forced into private opinions. It’s just not right.

Well, of course this is the way democrats act. What they say about Republicans or the Tea Party Movement is fair game. If anyone refers to Obama or his failed policies in a negative way, they are racists and need to be sent to “re-educatiuon” camps.

Anyone have a photo of the, “2012 The end of an error” bumper sticker?