The Jewish Vote Poll Isn’t, And Is, As Bad As It Looks

The Jewish Vote Poll Isn’t, And Is, As Bad As It Looks

While I certainly share Professor Jacobson‘s skepticism of the GOP’s chances with Jewish voters in 2012, like Jennifer Rubin, I also see opportunities for significant growth, particularly if Mitt Romney is our nominee.

The AJC poll showed Romney behind Obama by 50% to 32%.  Under the quick and dirty assumption that the undecideds will break the same way as the rest, Romney would be projected to win 39% of the Jewish vote.  This matches Reagan’s performance against Carter, the best Republican performance with Jews in the 32 years of presidential exit polls I could find (A longer post about this history of exit polling is forthcoming). 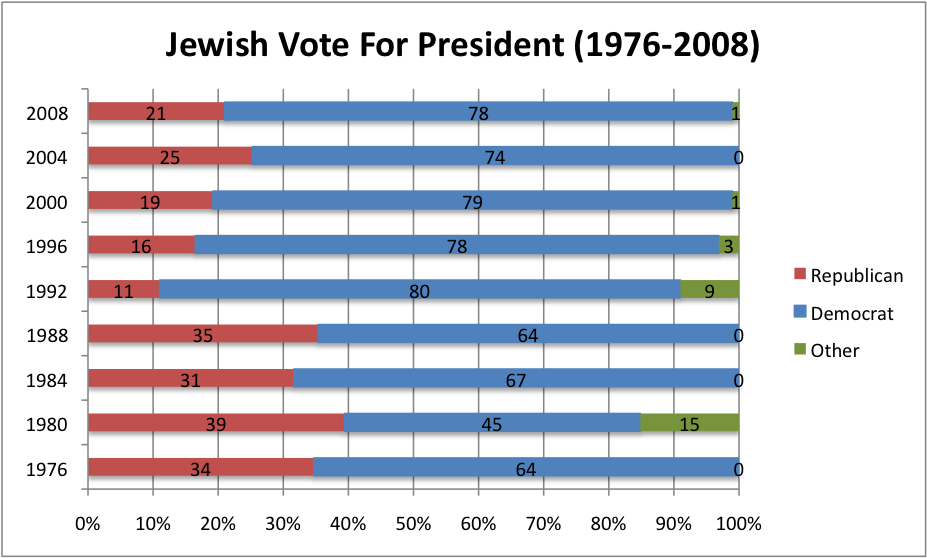 On the negative side, when this same poll was administered in September 2008, it showed Jews voting for Obama by a 57% to 30% margin, with McCain theoretically getting over 34% of the vote using the same simplistic assumptions about the undecideds.  On the other hand, the poll was conducted from September 8 through September 21,  which included a peak time for the McCain campaign, when Palin was new to the scene and not intensely unpopular with much of the electorate.

(Disclaimer before I get flamed:  Personally, I like Palin.  But bad poll numbers are bad poll numbers.  Lots of other people dislike her intensely.  I wish it were not true, but it is.)

During much of this time, the candidates were neck-and-neck, so much of McCain’s underperformance in this poll can be attributed to a general decline.  Some of the rest might be attributed to Palin’s particularly intense unpopularity among Jews stemming from Jewish Democrats’ anti-evangelical fearmongering strategy.

On the one hand, the usual anti-Republican tools will be less effective against Romney.  His social conservatism is low-key, and some don’t even believe it is sincere.  He is not an evangelical, but is instead a religious minority himself.  The widespread false belief among American Jews that evangelicals are highly prejudiced might even work to Romney’s advantage by causing the Jewish community to overestimate the anti-Mormon feelings among evangelicals just as they overestimate anti-semitism among evangelicals.

However, for many of the same reasons that Romney might be especially palatable for Jewish voters, he might feel the need to pick a running mate that would cover his right flank socially but would be lose him significant numbers of Jewish votes. Now obviously, incremental gains in the Jewish vote, even reletively large ones, are not worth sacrificing social conservatives, but even then, some social conservatives have more crossover appeal than others, and vice presidential candidates vary in how strong their impacts on the general election might be.

In short, this poll shows that the GOP does have the potential to make significant gains among Jewish voters, more of whom now disapprove of Obama than approve, but avoiding the Democrats counterstrategy may be a challenge for Romney, and even more difficult for the rest of the field.

McCain’s problem, was and is, that he is a ‘Progressive’. Romney’s problem, among others, is that his is the ‘Next in Line’ candidate. He’s the establishment candidate, and conservatives will not vote for him.

Charles, I assuming conservatives won”t vote for him in the primaries, but will support him if he wins the nomination.

I always thought that, too. But I’m hearing more rumblings to the contrary. These people know that voting for another progressive RINO means America won’t avert disaster; it will just take a little longer.

If I am to understand where the majority of Jewish voters are coming from is that they had no problem voting for Reagan who brought social conservatism into the Republican Party but that was the last and only time they’d ever vote for a ‘Big Tent’ (ie fiscal-social conservative hawk) candidate?

It is unfortunate for peace, loving and understanding that Jewish Democrats anti-evangelical fearmongering stragedy is what inspired Jewish Democrats to say that Bush is Hitler even through Bush is a staunch ally of Israel yet inspired to vote for a highly anti-Semetic president who for twenty years attended a church which openly preaches hatred for Jews.

I will agree there is prejudice going on; inspired by the fearmongering stragedy.

So the correct GOP strategy is to placate the Rabbinic left?

My other question is, if it’s about prejudice against ‘evangelicals’ then why did Jewish Democrats vote for former ‘evangelical’ Baptist guy Jimmy Carter who blames Israel for everything then change to voting for Reagan, the guy who brought social conservatives (former Democrat voters) into the Republican Party?

I don’t understand this line of reasoning- Jewish Democrats won’t vote for social conservativism because it is perceived as an ‘evangelical’ position but they’ll vote for fiscally liberal Mitt the Mandater Romney because he is perceived as the oppressed religious minority?