There is a good reason Obama did not unveil his jobs bill prior to his jobs speech.

It’s because the jobs bill is not a jobs bill, it is the tax increase Obama has been hoping for since he was a candidate, taking $400 billion from people making $200,000 or more (couples making $250,000 or more).  Had Obama released the plan, all the talk surrounding the speech would have been about the tax increase, the opposite of what the Axelplouffe message machine wanted.

What Obama misleadingly calls a jobs bill literally takes $400 billion from the demonized “top 2%” over 10 years to give to almost everyone else now, a pure redistributionist plan.  There is some revenue taken from oil companies and corporate jet owners (yes, that’s in there), but that is just political cover, a relatively small percentage of the total tax increase, as this chart shows: 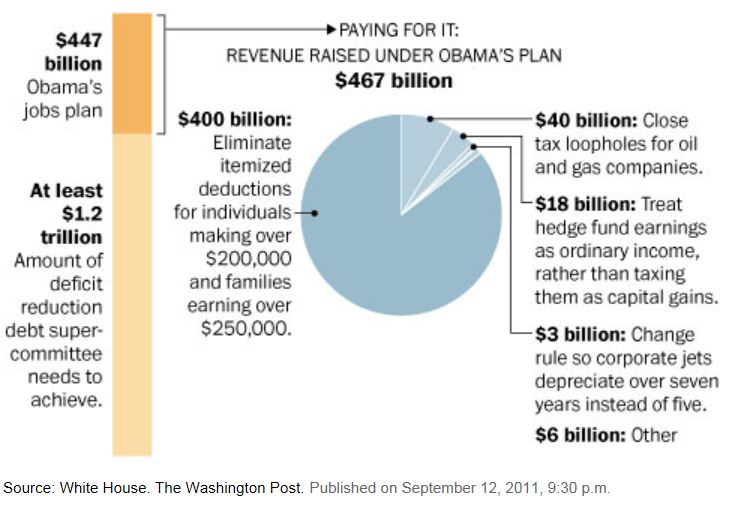 The jobs bill is an election year payoff, a bribe by another name, or if you will, walking around money.

There is almost nothing stimulative about the bill from a job growth perspective.  No regulations which stifle business are revoked, the cloud of Obamacare lingers, and class warfare on the job producers moves ahead.

Of course Obama wants it passed “immediately,” because it cannot withstand the light of day.  Sunlight will make it stink even more than it already does.

There will be a tendency to want to play ball with Obama.  And perhaps there are a small number of its provisions which might be worthwhile, but the package is a pathetic joke on the American people.  It will damage job growth while allowing Obama to say otherwise, a pretend jobs plan.

It may be, as Meghan McArdle (via Instapundit) suggests, that Obama has no intention of passing the jobs plan, that it’s just part of the perpetual campaign:

… I really wish that Obama hadn’t wasted my Thursday evening, and that of 31 million other Americans, listening to a jobs plan that was only designed to produce one job–a second term for Barack Obama.

This plan stinks, it is everything that is wrong about this administration and this President.  Expose it for what it is, loudly and clearly.

The American people are wiser now than they were in 2008, they can handle the truth.

Update:  Told you so, this whole jobs bill scam is an Axelplouffe campaign ploy, via Ed Morrissey:

Obama’s top political adviser David Axelrod said Tuesday that the administration was unwilling to break up the president’s $447 billion jobs plan if Republicans were only receptive to passing certain elements.

“We’re not in a negotiation to break up the package. It’s not an a la carte menu. It’s a strategy to get this country moving,” Axelrod said Tuesday on ABC’s “Good Morning America.”

“The American people are wiser now than they were in 2008, they can handle the truth.”

Let’s hope so professor, let’s hope so. Quite a few, the majority I’d say, of the people I talk to think he’s doing a fine job and would be getting more done if not for the Republican House. One guy actually said to me the other day that, “you know Obama is much more conservative than you think, and Regan was much more liberal.” He’s off my list of people to have lunch with at work; a person can only take so much idiocy.

Of course I live in Massachusetts, so maybe it’s just a localized phenomenon.

Indeed, one can hope that the average American would get it, but some people are stuck on stupid – particularly college kids. Going back to my office after teaching and caught in the press between classes, I found myself walking behind a student who proudly sported at least two “Obama” buttons on her backpack. All I could think was, “Oh, honey, you *do* want to get a job after graduation and pay off your student debt, don’t you?”

The Bowles/Simpson Plan gets ignored, but Simpson came out saying $1.2 trillion in cuts is peanuts … we need at least 4 just to stay in the game.

Concern over jobs as top priority is polled at 43% versus 22% for deficit. Bloggers “get it”, but there are busy people out there that still believe “a Tea Partier shot that Arizona congressman.” They get their news the old fashioned way .. fed to them by the lame stream media. They can “handle the truth”, but will they ever find time to uncover the truth?

Obviously, Obama and his sycophant media “ministry of truth”, feel they can win the news cycle day.

The elimination of itemized deductions for “the rich” will cause a serious problem for charities. As always, the Law of Unintended Consequences rears it’s head at the most inopportune times.

I have to dispute your use of the words “the Law of Unintended Consequences”…..I think “Intended” would be more appropriate…..remember, the government is going to take care of all of us so who needs charities?

And don’t forget, for this, which he presented as a momentous occasion in our nation’s history, he went to the great length of calling a JS of Congress.

This is typical Obama and this is why I say Obama is a charlatan.

You are far too kind.

The Republicans must really hammer on the poor economy. All of Obama’s “stimulus” (and some of Bush’s as well) has had very short-term positive effects on the economy which turn highly negative after the short boost.

What more ammunition do Republicans need? Just use what is there. Any decent Republican candidate should be able to defeat Obama in 2012.

[…] https://legalinsurrection.com/2011/09/the-american-people-can-handle-the-truth-about-obamas-phony-job… Like this:LikeBe the first to like this post. This entry was posted in Uncategorized. Bookmark the permalink. ← Here’s A Reason To Get Active: California On Brink Of Weakening E-Verify […]

Start using Obama’s own words against him. There’s enough material to keep any campaign busy. In his inaugural address, he said he would be the President of the entire nation and not just one group. Fast forward to his many references to a big chunk of that nation, calling us “enemies” and telling us we’ll have to “go sit in the back.” This is a small taste of the Obama shoe-leather-tasting extravaganza. Nobody has to campaign against Obama; let him campaign against himself.

Rush made a great point today. Why has no Democrat actually presented this *bill* to the House? Are they afraid of how the CBO will score it??

[…] The attempt by Barack Obama to revive his dead presidency with a fake jobs bill has failed. The fake jobs bill was always a fake. It was an attempt to fool worried Dimocrats that Obama has the cojones to fight, if not win. But […]

[…] Bad timing? This news comes when Obama is pushing a second Stimulus which is nothing more than a tax hike. […]