It seemed so dreamy and historic at the time.

You just had to put one of those on your car, and it didn’t quite work out for you, now did it? (h/t reader Linda):

“It struck me as odd,” state parole officer Kevin Devlin testified yesterday in Suffolk Superior Court about the campaign sticker plastered on the back of parolee Corliss’ white Plymouth Acclaim.

“He’s a guy from Somerville [Massachusetts], so I was surprised he was supporting Obama,” Devlin said.

See, if you had been like this guy, you would have walked, because that would not have struck the cop as odd in Somerville: 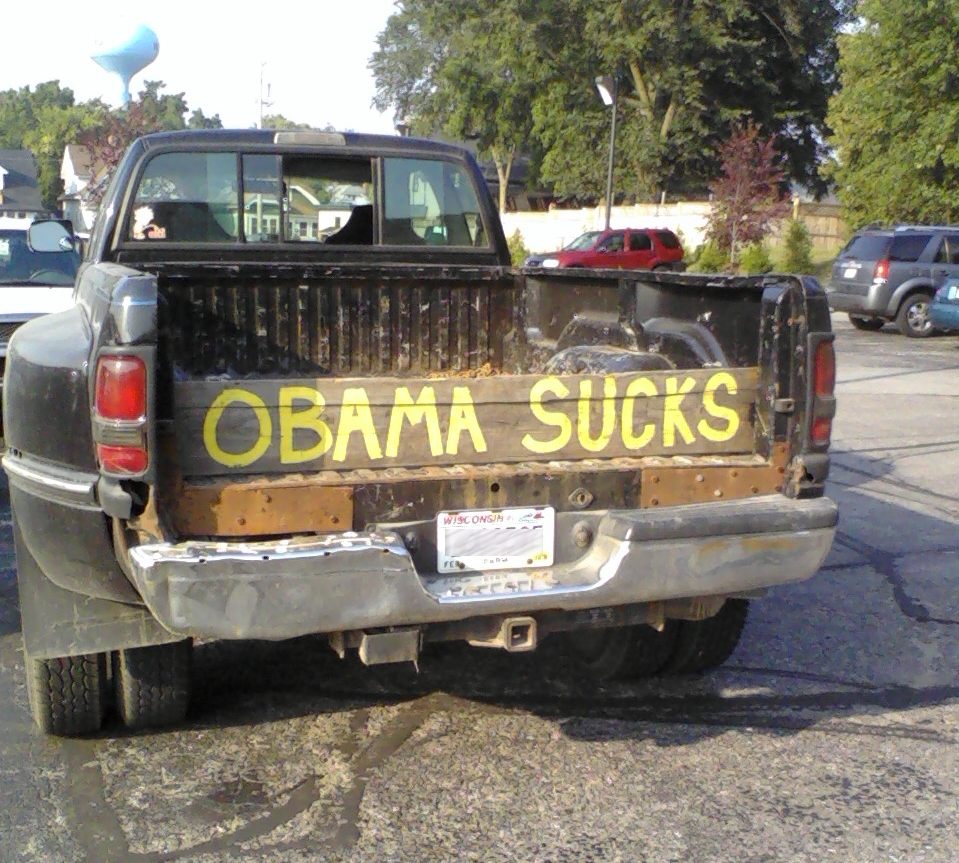 (Photo thanks to reader Matt who writes:  “I suppose a mere bumper sticker wouldn’t have conveyed the true emotion. Spotted in the YMCA parking lot in West Bend, WI.”)

My sentiments exactly. Whoever you are, WI truck owner, you said it well.

Even better than a bumper sticker – a hand made, shout out to the world, summing up political reality.

Hey – that’s my hometown – glad to see I’m not the only LI fan from West Bend!

Seeing this on a truck reminds me of 2004 – back then my child was going to a private preschool, and quite a few of the fathers drove work trucks (they were roofers, carpenters, masons, landscapers, etc., mostly self-employed)and they had that little Bush-Cheney sticker on the tailgate. Of course, they drive those trucks for years, and even now, I occasionaly see one of those trucks still sporting those bumper stickers. Those were good years for those guys – the “well-to-do” folks had the money to throw into projects, sometimes on a whim. My landscaper got a $25,000 patio job that someone wanted done ASAP in time for a high school graduation party. A friend who does cabinet layouts got a $50,000+ kitchen remodel – because of some professional (I think a doctor) whose wife was going to host the extended family’s Christmas party later that year.

Point is, business was good for those guys as long as some people had the discretionary cash to get some things done. Looking at the truck in the photo (the heavy duty dual wheels, the well used box), it looks like it could belong to the type of person who gets jobs when certain people are making good coin. Yes indeed, business sucks, as does Obama.